Lange, who moved with her husband to Beacon in 2010, has designed jewelry incorporating salvaged Barbie dolls since her days studying at the Maryland Institute College of Arts. It was there that Lange conceived what she calls her Plastic Body series, which continues to this day.

As a child growing up near Lake George, Lange played with Barbies but also constructed an elaborate universe for them of drawings and sculptures. 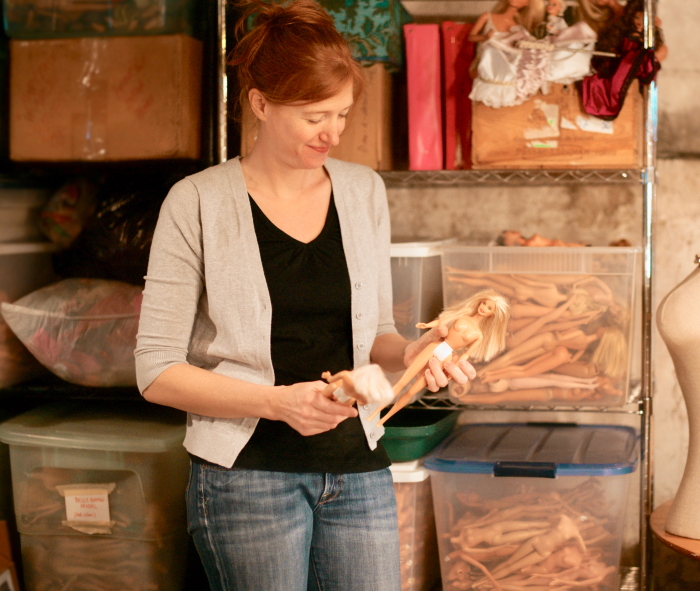 Margaux Lange in her Beacon studio with some of her Barbies. (Photo by Mar Noonan)

“I would fabricate tiny objects such as washing machines, developing my dexterity,” she recalls. “My dad was an artist and my parents were encouraging of my creative inclinations and my alone time. I had an innate need to work small, and to focus in on soothing, quiet activities, like making beaded jewelry and rope bracelets.”

As she grew older, Lange kept her obsession to herself. “I was a secret Barbie player until like, seventh grade,” she says. She still has her collection, she says, although it is sometimes raided by her 8-year-old daughter, who seems indifferent to the occasional missing limb or damaged hands.

In high school, Lange took a metal-working class in which the teacher was well-versed in jewelry design — “soldering, casting, basic fabrication” — which led Lange to consider it as a profession. But Barbie did not relinquish her grip, and her professors in Maryland were supportive.

“I didn’t get a lot of flak,” she says. “They saw that it came from me and stayed with me.” Others were not so forgiving, however, not only about Barbie as a model of the “perfect” woman but the mutilation of the dolls for the sake of art.

“People do not feel indifferent to her as an icon,” Lange says. “Once my work was online, the negatives started coming on strong. They became polarizing, sometimes shocking.” Nevertheless, Barbie, “which I infused with my creative longings as a kid, stayed the key element in my exploration and work. It clicked in and felt right and the pieces tumbled out of me from there.” 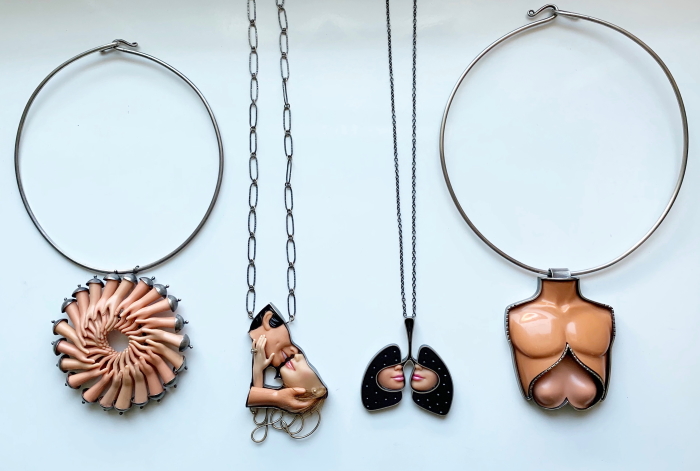 After graduating from college, Lange presented her work to galleries. She admits she was surprised when she was quickly signed by Julie Artisans’ Gallery in New York and Façere in Seattle, which each represented her for about 10 years.

Later, she began selling on Etsy and other avenues, which gave her a larger and younger audience. Today her designs are sold through her website at margauxlange.bigcartel.com and at a few boutiques around the country. The pieces are usually made with hand-fabricated sterling silver and pigmented resins, along with the Barbie elements.

Lange’s daughter Hazel is tasked with “sourcing the dolls,” Lange says, “She knows what I’m looking for, especially red lips, which are not nearly as common as pink lips, and Ken dolls.” Before Hazel was born, Lange says she “had this naïve idea that I’d care for her, then go to work. I soon discovered she was infiltrating every moment and those assumptions about working at home were swept away.”

Is it Barbie 4-ever for Lange? She admits that, “a few years back, I started to get a little tired of working with Barbie. I started having Barbie doubts. I put energy into more wearable production work, and did a pop-up show in Beacon. But it didn’t sustain my interest in the same way.”