Dorothy Eileen Ferrone, 103, a lifelong resident of Beacon who was employed making equipment for the military during World War II, died at her home on April 30, surrounded by family members. 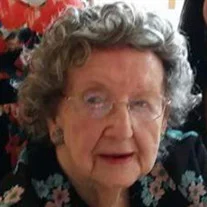 Dorothy was born Sept. 9, 1916, in Beacon, the daughter of William and Anna (Gray) Galbraith. After graduating from Beacon High School in 1935, she attended the Krissler Business Institute in Poughkeepsie but left to work at the New York Rubber Corp. in Beacon during World War II, making rubber rafts, life jackets and other equipment.

On Feb. 11, 1945, she wed Joseph Ferrone at St. John the Evangelist Church in Beacon. He died in 2003, after 59 years of marriage. After raising three sons, Dorothy returned to work. She was employed by the Fishkill National Bank in Beacon from 1969 until her retirement in 1981.

Dorothy is survived by her sons, Gary Ferrone (Nancy) of Poughkeepsie and Gregory Ferrone (Diane) of Spring, Texas; five grandchildren; and seven great-grandchildren. Her son, Brian Ferrone, died before her.

A graveside service for immediate family was held at St. Joachim Cemetery in Beacon on May 5. Memorial donations may be made to St. Joachim-St. John the Evangelist Church, 2 Oak St., Beacon, NY 12508.