Among the surprising discoveries in a report released today (May 22) by the Climate Smart Philipstown task force is how much the town will have to reduce its greenhouse-gas emissions to achieve the blissful state of “carbon neutrality” in which it creates less carbon dioxide than it removes through mitigation.

The report was created by the task force, the Ecological Citizen’s Project, ICLEI-Local Governments for Sustainability and volunteers who included scientists, researchers and Haldane middle school students who waded into knee-deep mud to measure how much carbon local wetlands were storing.

Although wetlands make up only 5 percent of Philipstown, their ability to sink carbon means that they hold the equivalent of 20 years’ worth of community emissions. Philipstown’s abundance of green space means that 40 percent of the town’s emissions are being sequestered by its natural resources, said the 116-page report. 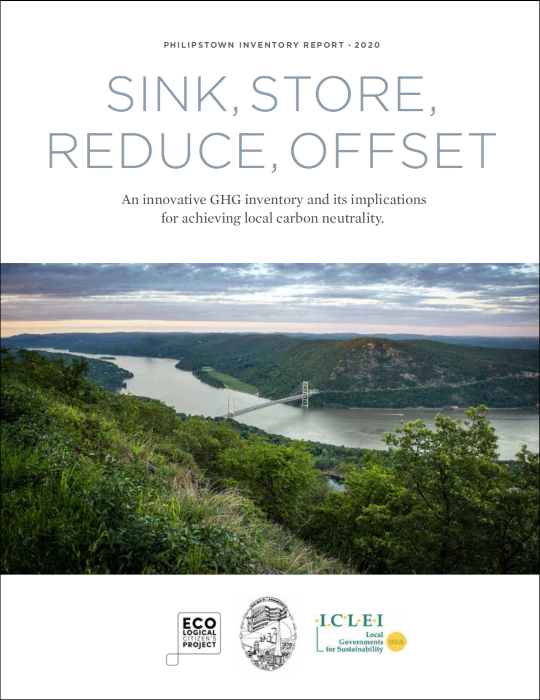 The cover of the report, which was released on May 22.

As to whether that 40 percent will “count” toward achieving local carbon neutrality is unclear. Jason Angell of the Ecological Citizen’s Project (who is also a member of the board of Highlands Current Inc., which publishes this newspaper) said that the task force even discussed the topic with one of the United Nations’ negotiators of the Paris Climate Accord. “It’s an undefined area on local policy, so it’s a debate for Philipstown to have,” Angell said.

The report looks at the totality of Philipstown’s emissions, in contrast with other local greenhouse-gas inventories that focus only on emissions made within the municipal boundaries. That means measuring everything from emissions caused by shipping goods and services to Philipstown to how individual diets contribute. The report noted that consumption of beef accounts for half of local food-based emissions.

The report also differs from other inventories in that its consumption-based data was informed by local reporting and surveys, the first effort of its kind in New York State, according to the task force.

“Other reports were using national averages and estimating that that’s a good representation of their community,” explained Jocelyn Apicello, also of the Ecological Citizen’s Project. “But what we know is that each community is so distinct and has different behaviors. So we did household surveys, which gave us real data from local folks.”

Even taking into account the limits of self-reporting surveys, the report paints a clear picture of where the town’s emissions are coming from and what steps each individual can take to lower them.

Roberto Muller, the coordinator of Philipstown Climate Smart Communities, said he was surprised how high goods and services ranked in terms of the town’s emissions. The top five categories of emissions are, in order: services, food, home-heating, transportation and goods. Air travel comes in at a distant sixth.

“Now that I understand the life-cycle analysis, it makes a lot of sense, because there’s so much that goes into manufacturing a couch or clothing, especially because of the way our production system is globalized,” he said. “Materials have to move so far before they finally turn into the final product, and then they generally get shipped very far as well. I didn’t realize how large that is on a household scale. The good news is, for a lot of those services and goods, there’s a lot of control in each household in terms of where to spend their money.” 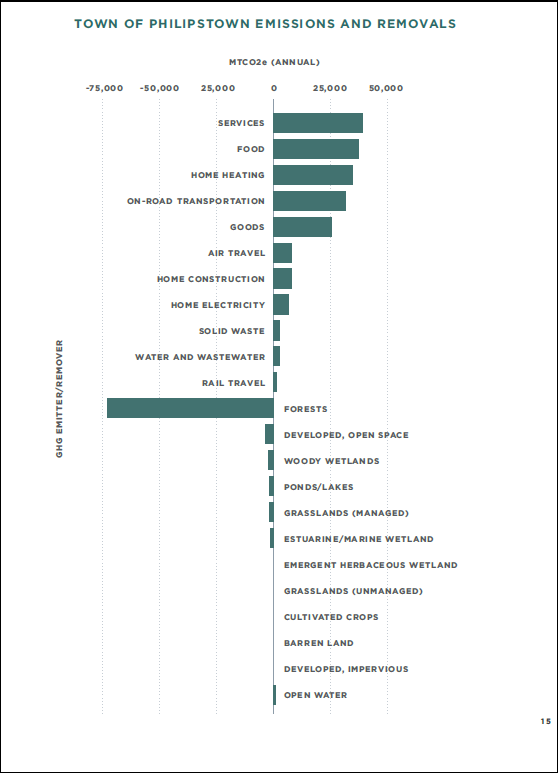 A chart from the report

Muller said he hopes the report will empower residents by demonstrating the impact of their individual actions. “So many people say: ‘I would like to be responsible for my own behavior,’ ” he said. “A lot of ideals that are packaged in with the American dream are about taking responsibility for our own actions and this report shows us the benefit of doing that. We don’t have to wait for big-picture solutions from large businesses and the government.”

Next up is for Philipstown to consider the report’s findings and to, among other recommendations, consider whether to adopt the idea of consumption and sequestered carbon in its plans. If it does, it could pave the way for compensation from development projects for the removal of natural resources. “You could say, ‘OK, how is it going to affect our reduction goals to remove 20 acres of trees?’” he said. “We’re now valuing that within our municipal targets. Maybe it doesn’t matter as much in Philipstown because we don’t have as much development, but it sure as hell would matter in Beacon and Fishkill.”

Apicello said that she hoped the report would have an impact outside of Philipstown as other communities take stock of their emissions.

“It would be great if other municipalities didn’t have to reinvent the wheel of data collection and instead they could use some of the things we spent a lot of time pulling together,” she said. “We hope it gets shared and other communities use it as a resource as to how they can conduct their own inventories.”