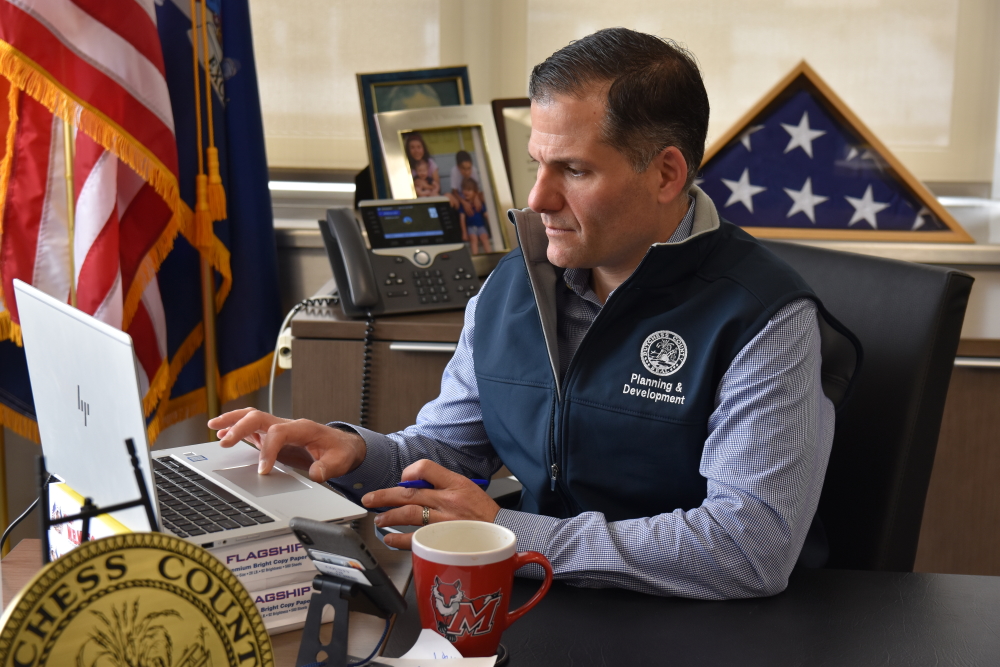 On Tuesday (May 26), Dutchess County Executive Marc Molinaro participated in a Current Conversation by video conference. Below are excerpts from the 45-minute discussion, edited for brevity and clarity. See highlandscurrent.org/cc-molinaro for a video of the full exchange.

The Mid-Hudson region was cleared on Tuesday (May 26) to begin the first of four phases of reopening. Could you give an overview of what that means?

It’s both a reopening and the start of a process. Will we see massive changes? Perhaps not. But a lot of people are going back to work — manufacturing, construction, agriculture and the wholesale trade, and retail can engage in delivery, curbside or in-store pickup. About $2.5 billion worth of development projects that have been on the sidelines for two months can begin again. The worst-case scenario is that Phase 2 doesn’t begin for two weeks, because the governor has said the phases may come in fewer than 14-day increments.

People may have this vision that the doors will be flung wide-open in Phase 1 and we’ll go back to where we were pre-March. But there are restrictions. How do you expect to enforce the rules?

The fear that we’re moving too fast and the anger that we’re not moving fast enough are both valid. Our goal is to try to mediate this in a way that’s as fast and as safe as possible.

Any business that is reopening is supposed to complete a basic safety plan. While it’s not going to be filed with a health department or the attorney general, it is a document that businesses will be held to if and when they may be inspected. Making that self-affirmation is important as a sort of self-policing.

That said, the orders do have the force of law. I know there are some people who question the validity of that, but under state law, executives like me, the governor, a mayor, a town supervisor, in a declared state of emergency are provided certain powers to restrict certain activities. And of course the state authorities, regulatory agencies and the attorney general all have the capacity to enforce them, as do health departments and building inspectors and others.

However, these are not rules that are easily enforced and, when enforced, are not easily accepted. I would encourage self-adherence. Your consideration of public health is not a political statement. There are real people who have gotten really sick and some who have lost their lives, and it is an act of selflessness to do our best to not transmit a disease. At the same time, I would discourage residents from some of the more aggressive actions that people have taken to shame, embarrass or even physically confront someone who isn’t wearing a mask or isn’t engaged in social distancing.

Will we be able to switch gears if the numbers turn for the worst?

The governor uses this term about valves — the valves open, the valves close — but no politician has a good analogy for any of this. Every day, our health department and state and county leaders meet to look at the data. If the numbers start to trend in the wrong direction, perhaps Phase 1 becomes 10, 14 or 20 days instead of seven or 10 days or 14 days. Or Phase 2 is frozen for a period of time. Maybe some businesses that become approved — I hate the term essential because in my estimation, every job and business is essential — maybe you scale back a little. The hope is that none of that is necessary.

The biggest concern is a massive spike, which could require the nation, the state, to freeze again, which would be devastating. A spike is possible, but is it likely? It’s not. We’ve learned enough about the disease, and we know enough about our capacity to slow transmission, that we can make smart choices.

The state established regional control rooms; the Mid-Hudson includes yourself and Putnam County Executive MaryEllen Odell. What is its role?

The word control is a bit of a misnomer. It’s more of a monitoring room. The seven county leaders meet at 3 p.m. every day with state officials to talk through whatever announcements came that day. Sometimes we don’t know — and I think even the folks from the state don’t always know — what’s being announced until it’s announced. If I were to be critical, that’s one of the things I’d be critical about.

We review the benchmarks, and then we ask questions. It’s a bit of a farce, but it is valuable to have open, candid and sometimes heated conversations. The ongoing saga about whether the region would meet certain benchmarks at a certain period of time was adversarial, but ultimately the state moved us forward with Phase 1.

As another example, there are plenty of restaurants that want to know when they open if they will be able to be 50 percent capacity inside, or less or more. There’s still no clarity. There’s a larger business in southern Dutchess, Splashdown, which needs to spend $500,000 to be ready to open. That could happen under Phase 4 but no one has said amusement parks are going to be permitted. Our position is if Splashdown knows now it will be able to open in Phase 4, spending that half a million dollars won’t be a loss. You can’t tell them a week before Phase 4 begins that they can open, because they’ll never open.

What more would you like to see from the federal government?
The federal government has to step in. This is not a request for a bailout. For generations during natural disasters and emergencies, although with some political bickering and debate, it has come through. It is supposed to step in when demand exceeds capacity at the local or state level.

Local government is where emergency response begins. Oftentimes we think that the president — any president — is supposed to come in, declare something and be helpful. It is almost always the reverse. The 1,900 health departments run by county governments were the tip of the spear for this response. The federal government made too many political decisions and didn’t understand how broad and deep the impact of this particular crisis was or would be. It didn’t realize how weak and shallow our access to PPE [personal protective equipment] and testing and to distributing those things across county and state lines truly was. We better have learned from that.

I take the governor’s approach, that our job is to respond, and when it’s over, we’ll consider the politics. But in the midst of responding to an emergency, which we are still in, I need the federal and state government to work with us and you need me to be able to work with them.

Do you think it’s likely that Congress and the president will agree on aid for counties?
I think they will. It will likely include a lot of other things, as bills out of Washington often do, but that’s the way it gets done. At the end of the day, what the federal government — and in particular, this president — does not want is that we begin an economic recovery only to have massive government layoffs.

The federal government has never stepped away during a time of crisis. Somehow it summons the political courage and the common sense to develop and deliver aid. In Dutchess County, we are looking at as much as a $75 million loss in tax revenue and the expense of responding. The House has adopted a bill that includes direct aid to states and counties. If adopted as is [by the Senate and signed by the president], Dutchess wouldn’t have to downsize. It would make us pretty much whole, with some pain, and sustain us for the next 24 months, which is what we need in order to rebound. A $75 million hole in our budget is almost twice the budget gap when I came into office in 2012, and that required a hundred jobs downsized.

I know the human toll of this disease. I never expected to experience it personally but I did and so it’s hard for me to accept people who argue this was some sort of hoax. [Molinaro’s father, Anthony, died on April 10 of complications of COVID-19.] There are people sick and there are people dying. But it’s equally hard for me to accept those who think we should remain in this state of frozenness.

2 thoughts on “Dutchess County Executive: ‘Feds Need to Step In’”