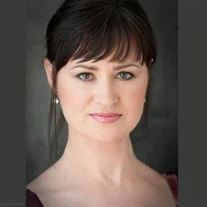 Irina Mozyleva Siegel, 51, of Beacon, died May 27 with her family and friends at her side. An accomplished singer, she was diagnosed in 2014 with a rare form of cancer; over years of treatment, she joked that she was partly bionic, according to her husband, Aryeh Siegel.

Irina was born on May 31, 1968, in Miory, in the Vitebsk region of Belarus (then part of the Soviet Union), the daughter of Nikolai and Lia Mozyleff. At age 6 she was plucked from grade school by Soviet talent scouts and placed in a boarding school where students worked at their instruments and voices for hours every day.

She remained in this rigorous system through college, then transferred to the Moscow Conservatory of Music. From there, she sent a cassette to the Julliard School in New York City and was invited to enroll on a full scholarship. Seeking a more intimate style of training, she transferred to the Curtis Institute of Music in Philadelphia, having also received a full scholarship there.

After graduation she joined the Merola Opera Program, which traveled the country performing fully-staged operas. She moved to New York City and, in 1997, married Aryeh Siegel, an architect. She gave birth to their daughter, Leah, on New Year’s Eve 1999, a few days after the couple moved to Beacon.

In Beacon, Irina continued to pursue her career. She was committed to Russian church music and produced a number of independent projects, including as choir conductor of the Russian Orthodox Church in New York City and a chief soloist. Each year at Easter, her husband said, she would hush the crowd of worshipers when she began a hymn that became anticipated. Irina was also a music teacher in local schools and gave private lessons in piano and voice.

“She was a steady customer and a bit of a celebrity at both Memorial Sloan Kettering Cancer Center and Mount Sinai Hospital,” Aryeh Siegel wrote in a tribute. “She ruled the doctors and nurses with a sweet complicit smile and addressed them all as ‘darling’ with her rolling Russian ‘R.’ ”

In 2016, after losing her ability to sing due to surgery, Irina redirected her creativity to clothing design, opening ClothFactor, a retail sewing studio that she ran next door to her home at The Lofts at Beacon. She grew the business for a couple of years, which her family said made her even happier than singing and satisfied her deep creative urge. “Irina never liked to see herself in a ‘battle’; she viewed her rare cancer more as a sly opponent to outwit,” her husband said.

She took part in cutting-edge immunotherapy trials at Mt. Sinai but doctors determined that further treatment would have more risks than benefits.

Besides her husband and daughter, she is survived by her father in Belarus; a sister, Tamara, also in Belarus; and her in-laws, Burt and Karen Siegel.

Information provided by the Riverview Funeral Home by Halvey