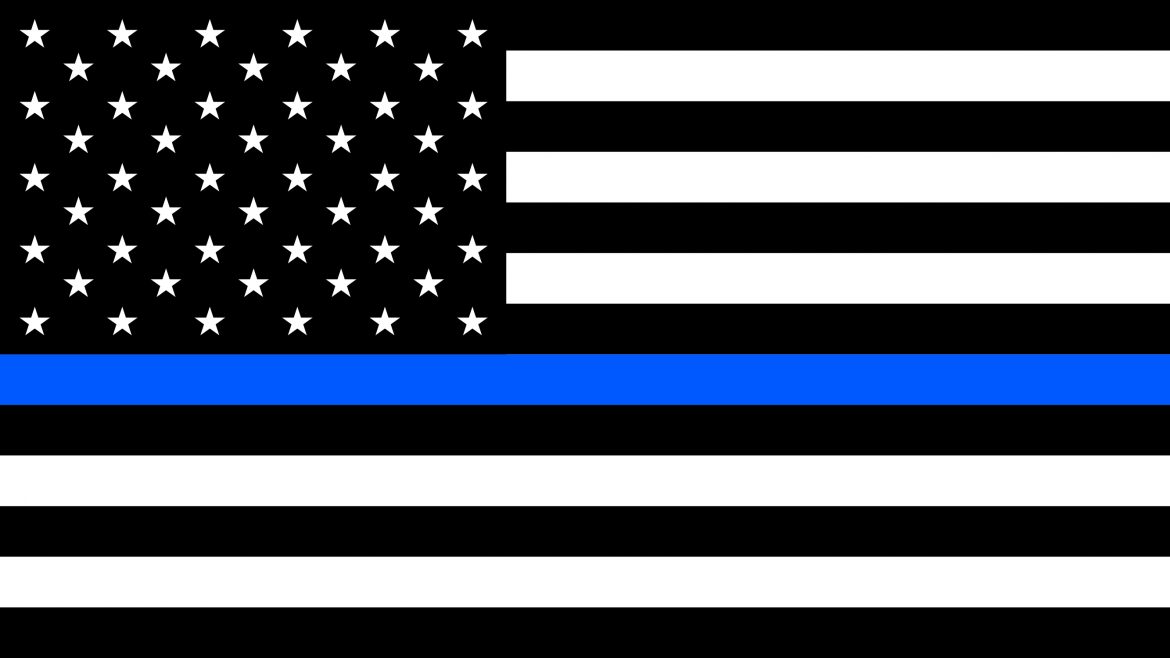 A village resident has raised concern that a decal on Cold Spring Police Department vehicles could be misconstrued to have racist overtones.

In an email read by Mayor Dave Merandy during the board’s Tuesday (June 2) meeting by video conference, Patrick Biesemans expressed concern that the image sends the wrong message, especially to minorities.

The decal depicts a U.S. flag in black-and-white with one of its 13 stripes colored blue. It has been used to show support for law enforcement but also has generated controversy.

During a violent, Unite the Right march in Charlottesville, Virginia, in 2017, the flag was raised by white supremacists alongside the Confederate flag.

The flag has been used more widely in association with Blue Lives Matter, a campaign created by some police officers as a response to Black Lives Matter. A group called Blue Lives Matter NYC sells hoodies and T-shirts with the image.

Last year, the police department in Germantown, Maryland, removed a donated thin-blue-line flag after a public outcry. In December, flags appeared outside two police stations in New York City, prompting similar protests. And on May 31, in Hamilton County, Ohio, the sheriff’s department flew the flag following days of unrest in Cincinnati, prompting a rebuke from the county commissioner, who said, “I know I am not alone in my view that flying the flag was provocative and inappropriate, especially in the context of this weekend’s events.”

At the Cold Spring Village Board meeting, Trustee Steve Voloto noted that “it is the exact flag of the white nationalist group that came out in response to Black Lives Matter” at the Charlottesville rally. He acknowledged that police departments fly the flag “to show support for the men and women who put their lives on the line every day to protect us. That’s why our guys have them on their cars.”

But, he said, “Did they not know the history? Did they have it before and the [white supremacists] used it as their symbol? It doesn’t belong on our cars with what’s going on in the world. If the stupid bumper sticker pisses people off, take it off the cars. Why are we even talking about it? Pick a sticker that has more positive meaning.” 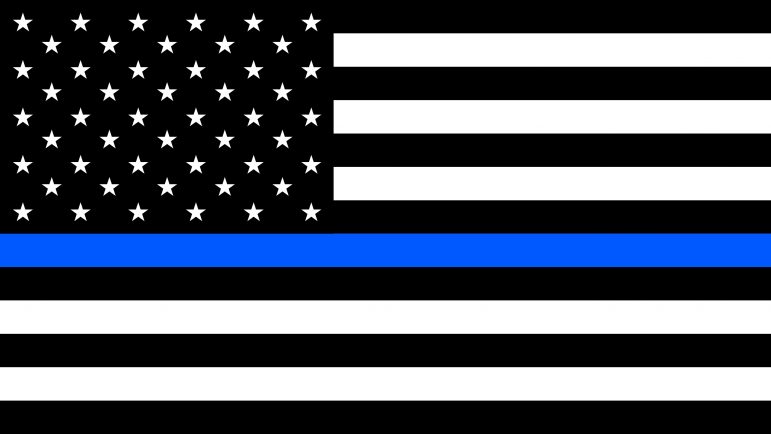 Trustee Lynn Miller said that because the flag’s meaning is open to interpretation, she would favor removing it from the police vehicles.

“It’s kind of bad form to take our American flag and represent it differently,” she said. “That actually is against the flag code. Don’t put symbols on police cars that are going to be divisive. Put a shield that says ‘To protect and serve,’ or something that celebrates the dedication of our cops to our community. Put an American flag.

“I don’t see how it helps anything, especially with the events of this past week,” she added, referring to the death last month in Minneapolis of a black man, George Floyd, while in police custody, and the protests and clashes that have occurred around the country since.

“We have great cops,” Miller said. “But we should remove all barriers that might prevent anyone from approaching them for help.”

Trustee Fran Murphy disagreed. “I am in favor of leaving them; it shows support for our police,” she said. “People can read anything into anything; there are different definitions and meanings. No one put them there out of anything racist.”

Larry Burke, the officer-in-charge of the Cold Spring Police Department, said he added the decals to the vehicles about a year ago and acknowledged that some people misunderstand their intent.

“It doesn’t mean the blue line of silence: it means we are respecting all officers killed in the line of duty,” he said. Opposition to the decals “is a knee-jerk reaction” because of the protests, he said.

Burke said that while the thin blue line may have been “hijacked” by extremist groups, he would push back on having the decals removed but would abide by whatever the Village Board decided. “I’m not looking to offend anyone by putting them on our police cars,” he said. 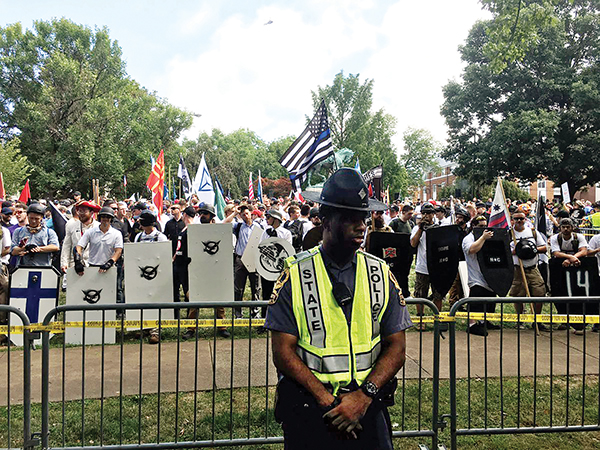 White supremacists at the Unite the Right rally in Charlottesville, Virginia, in 2017 hoisted a thin-blue-line flag, at center. (Photo by Christopher Mathias)

Many of the spectators at the Zoom meeting said via chat that they were offended by the decals, Murphy said, a reaction she also said she felt was heightened by the current unrest.

Merandy said the board needs “a bit more time” to consider the issue and to research the meaning behind the symbol. “This is all new to me; I want to do the right thing here,” he said.

“We support our police,” Merandy said, adding that if the decals are removed it would not mean that the CSPD officers are not appreciated.

The mayor, who rarely comments on national issues, said he finds the situation across the nation disturbing. “I don’t want to fan the flames that are burning our whole nation,” he said. “It’s a sad situation. It’s incredibly disturbing and I can’t believe how low we are going, or where the bottom is. Some people say there is no bottom and maybe that’s true. We are not headed in the right direction. Hopefully we can find a leader that can turn this around.

“This is just a terrible situation. From my point of view, being mayor of our little town, what I saw on those films was — I think ‘repugnant’ sums it up pretty much.”

If the metrics remain on track, the Mid-Hudson Region could begin Phase 2 of the state’s reopening plan on Tuesday (June 9). Merandy and trustees outlined what residents can expect when the next phase begins: 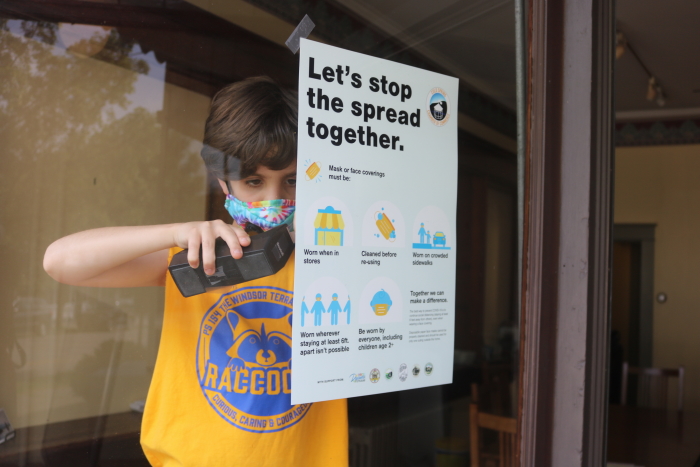 Nico Lagerman hangs a poster distributed by the Cold Spring Chamber of Commerce in the window of The Current office on Main Street. (Photo by M. Turton)

Laura Drummond, the organizer of the Putnam County Wine and Food Festival scheduled for August, and John Scherer, who had planned to hold a Hops-on-the-Hudson event in July, each emailed the village, asking the board to reconsider its May 26 decision to not allow any large events until at least September.

The board did not reverse either decision, although Trustee Marie Early supported reconsidering Scherer’s event, which she described as well-organized and reasonable.

Scherer attended Tuesday’s meeting to plead his case. He and Merandy engaged in an animated exchange, with Scherer continuing to press the mayor for flexibility.

Clearly agitated, Merandy responded, “We are the representatives of this village and safety is paramount. Did you not hear anything I said — the part about 500 people coming to our village?”

Scherer countered that his event would be a controlled environment and concluded sarcastically, saying, “I appreciate your time, thanks for being so considerate, and you have a good night. Bye-bye, Dave!” He returned later and apologized for his abrupt exit, but hinted he will look for a new venue.

Rock Street resident Ryan Trow said he has spoken with at least 20 business owners who support his idea of closing all or parts of Main Street on Fridays and Saturdays to help stores, and later restaurants, to limit customers to 50 percent of capacity. “It would make a substantial difference in their ability to remain viable for the foreseeable future,” he said.

Trow said the limited-capacity rule could be in place until there’s a vaccine, and that many business owners say they cannot be viable with that restriction. He warned of empty storefronts that would take years to be reoccupied.

“If we can be innovative we can compete with the villages and towns that surround us that are already thinking about these types of plans,” Trow said.

He said he had sent a concept map to Merandy that calls for closing Main Street to vehicles. A less-aggressive approach could include sections of the traveled portion of the street and some sections of parking.

The board said it would discuss Trow’s proposal at its Tuesday (June 9) meeting.

Merandy said he has thought about closing Main but that Trow’s plan presents a number of concerns, such as pushing traffic to sides streets and the need to route Metro-North traffic through Forge Gate Condominiums, which is private property. He also pointed to weekend business deliveries and the impact the closure would have on residents of Main Street.

“But I’m willing to listen,” he said. “I’m interested in seeing how it will work.”

Village resident Tara Vamos said she has also submitted plans for the board’s consideration, including making Main Street one way and eliminating at least one lane of parking.

⬛ Recycling placed in plastic bags will no longer be picked up by the Highway Department. Recycling must be placed in bins, garbage cans or paper bags. The village also plans this summer to phase out plastic bags for yard and lawn debris.

⬛ Tax bills, which were mailed this past week, may be paid without penalty through June 30 by dropping payments  in the mail slot at Village Hall or by mailing them to Village of Cold Spring, 85 Main St., Cold Spring NY 10516. Only checks or money orders are accepted. Taxes unpaid as of July 1 will incur a 5 percent penalty for the first month and an additional 1 percent for each month or fraction thereof until paid. Village Hall will be open on Fridays in June between the hours of 9 a.m. to noon for tax payments. It remains closed for all other matters but is scheduled to reopen on July 1.