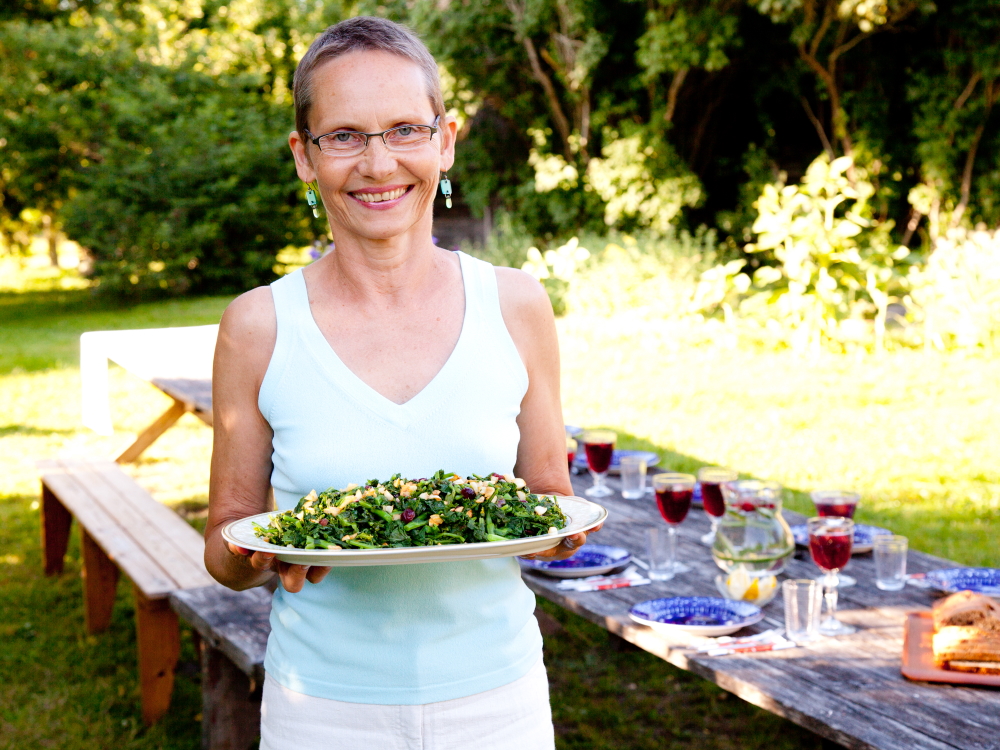 Marika Blossfeldt, of Beacon, is a health coach, yoga teacher and chef.

You have a new book, Cooking with Marika: Clean Cuisine from an Estonian Farm. How is it different from Essential Nourishment?

The first book was a very basic education in nutrition. I wanted to go deeper into certain topics, including healthy weight loss, gut health and how to prevent inflammation. I also talk about breath and awareness, present a few Kundalini exercises and recommend a few nice things you can do to pamper yourself. And, of course, there are recipes, including some using wild plants, suggestions for weekend breakfasts, smoothies and baked items using alternative flours.

Quarantining seems to prompt constant snacking. How can someone avoid that pattern?

Awareness and paying attention to the body is the key. A craving for sugar often comes from being dehydrated, so have a glass of water and see how you feel — maybe you won’t need that sweet thing anymore. As adults, we lose our sense of thirst. In the afternoon, we have a sense that our body wants something — we think coffee or cake, but it’s water. People are attached to foods that make them feel good, and these are often related to something they had as a child. That’s a process to slowly wean yourself off sugary foods, retrain your taste buds, and get that sweet flavor from foods such as carrots, beets, sweet potatoes and pumpkin.

You self-published Cooking with Marika. Was that easier than working with a publisher?

No! The difficulties were unexpected. My designer was in [Marika’s native] Estonia, and doing the edits, without being able to sit next to each other, got it behind schedule. But the real difficulties began once we got the files to the printer in China. They printed my first book and were so attentive. But this time, they told me it was too wide. When the proof arrived, they had trimmed too much. At that point, I started pricing it out in Estonia and even with shipping it wound up being less expensive.

How are you holding up during the pandemic?

I usually spend from mid-May through October at a small farm and art-and-wellness retreat center I own and run in Estonia. I was supposed to fly on May 20 to Tallinn [the Estonian capital], but I couldn’t because there were no connecting flights from Stockholm. Now, because Swedish corona cases are up again, Estonia might close its door. I’ll get there, but I’m not sure when. Because the farm only hosts groups, many from Germany, and our program includes trips around Estonia, we’ve had to cancel, and they’ve had to cancel, the July trips. I’m hoping August can happen.

All of us need to stay as healthy. Any tips for boosting the immune system?

Stay away from white sugar. Go with natural sugars like honey, maple syrup and brown rice syrup. My own philosophy is to eat foods that don’t need labels. Avoid foods that need preservatives. The function of preservatives is to kill bacteria, but the chemicals don’t differentiate between harmful and helpful bacteria. It’s important that we take care of our friendly bacteria. Bad bacteria are dormant until the balance is off. And leafy greens. There are so many choices: collards, spinach leeks, parsley, basil. The leaf is the lung of the plant. My go-to method is to sauté garlic in olive oil, rip the leaf into pieces after washing, swish them around, then drain in a strainer. When most of the water has drained, dump them on top of the garlic in the pan to create a steaming action. So delicious.