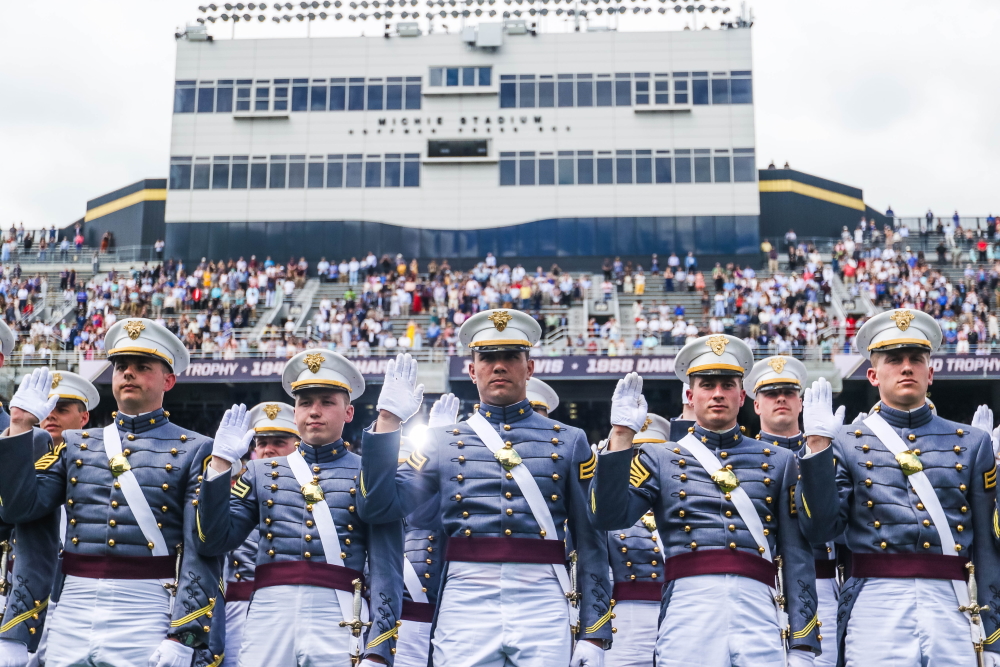 Cadets take their oath (above) and toss their hats (below) at the 2019 West Point commencement. The 2020 ceremony will be held at the parade ground instead of Michie Stadium. (Photos by Brandon O'Connor/U.S. Army)

Trump will be in Highlands next week to speak to cadets

If all goes as intended, on Saturday (June 13), West Point will hold its annual commencement with President Donald Trump and the cadets in attendance but no families or friends of the graduates.

The U.S. Military Academy, whose students become officers, has been fine-tuning its ceremony to include social-distancing restrictions that are in place on campus and in New York state because of the COVID-19 pandemic.

Parents, siblings and other relatives and guests will not be allowed to attend the ceremony, although West Point promised to provide “a quality livestream” for them “and the entire nation.” The 2020 class, with 1,123 members, is the academy’s 222nd.

The seniors took their oaths remotely on May 23 to be commissioned as second lieutenants but were ordered to return to campus by May 30 so that any who tested positive could be quarantined for 14 days before the ceremony. Lt. Col. Emanuel Ortiz, an Army spokesman based at the Pentagon, said 1.5 percent of the class, or about 17 cadets, tested positive.

“This was anticipated,” he said. “None were symptomatic, and no cadet has contracted it through person-to-person contact while under the Army’s care. Those who test positive are isolated and receive appropriate care and attention.” 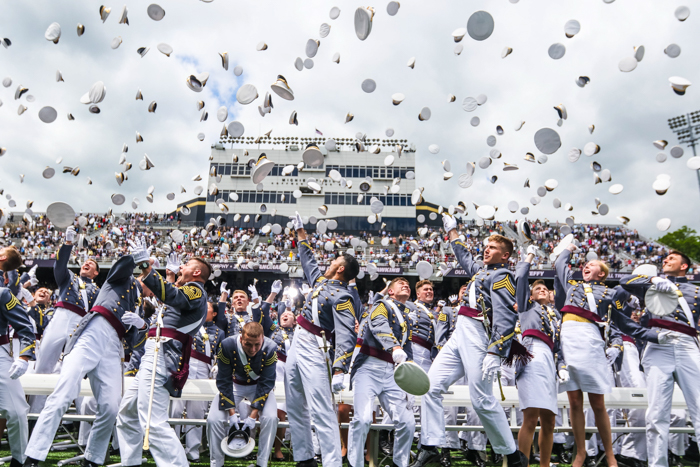 Army officials faced criticism for scheduling a gathering of more than 1,100 people during the pandemic so the president could speak to the class, but said that seniors must return to West Point anyway for final medical checks, equipment and training before they receive their assignments. Lt. Gen. Darryl Williams, the superintendent, has said the school would create a “safety bubble” for the students.

Francis DeMaro, a representative for West Point, said on Wednesday (June 3) that the academy is placing restrictions on the ceremony “in accordance with public health officials’ recommendations and considerations for the health and welfare of cadets and families.” It will take place at the parade field instead of Michie Stadium to allow for spacing.

Like other parts of New York state, “West Point has started a phased reopening of services” and “all personnel are still practicing social distancing and wearing masks and people are reminded to frequently wash their hands,” he said.

The academy suspended on-site classes and sent cadets home at spring break. Commencement, which usually takes place in late May, was postponed.

DeMaro said the U.S. president has a standing invitation to deliver the commencement address but typically rotates among the nation’s four military academies. “This was West Point’s year” for a presidential visit, he said. President Barack Obama spoke to cadets in 2014.

The Army has said the ceremony will be conducted much like commencement at the Air Force Academy on April 18, when Vice President Mike Pence addressed graduates who sat 8 feet apart from each other. The day before that ceremony, Trump announced he would speak at West Point, which by some reports was a surprise to the academy.

Asked if West Point expects opposition to the president’s visit, DeMaro said that “typically there are small demonstrations every year for graduation. We anticipate this year being no different.”

However, demonstrations can only occur outside the academy, where local governments have jurisdiction, he added. The cadets themselves “are members of the military and prohibited from protesting in any manner,” DeMaro said.

One thought on “West Point Graduation Will Include President, But Not Families”