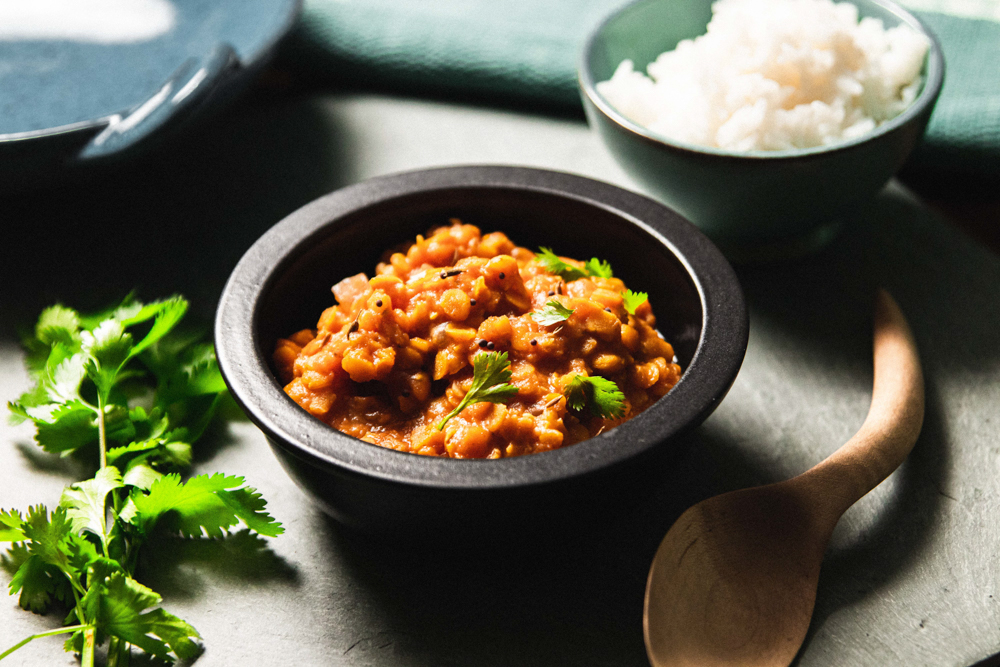 My husband, Peter, doesn’t cook often, but when he does, there’s a good chance it will be lentil soup. Of the past 10 dinners he’s made, I’d estimate that lentil soup comprised at least five of them. Whenever he makes it, I am always newly surprised at how good it is. It’s as if some tenacious idea that I don’t like lentil soup lays claim to my mind, and no matter how many bowlfuls of evidence to the contrary I consume, this underlying belief returns the moment the dishes are washed and put away.

The upside is that every time he makes it, I experience it as a happy discovery, like: Wow! Who knew lentil soup could be so good?

Not that I resist all lentils. I very much love to make red lentil dal, an aromatic Indian stew. The name “red lentil dal” is actually a kind of tautology, because the word dal also means “lentil” in Hindi. Dal additionally refers to any kind of legume (mung bean, chickpea, dried pea) as well as the various different stews and pastes made from them. A more accurate name for this dish, then, is “masoor dal.”

Translations aside, I am clear on what I mean when I say “dal” because who doesn’t know the object of their longings? My dal-crush was ignited a dozen years ago when I came across a recipe that pleased me enormously. It was both simpler and tastier than others I’d made. My favorite detail was the toasted mustard seeds sprinkled on top that produced tiny pops of happy mischief on the tongue. I made it several times before the recipe disappeared.

Where did it go? I wish I knew. I’ve searched for that recipe numerous times since. I’ve interrogated my memory — Are you sure it was online? Are you sure it featured red lentils and not, say, chickpeas? — but every alternate approach has proved just as fruitless. I’m stuck pining after a culinary ghost.

The reason I’d gone looking for that dal recipe in the first place was because I had been visiting my dear friend (and culinary idol) Frances. She said, “I like to have a pot of dal in the fridge in case the kids want a snack.” Both her children and mine were under 10 at that time, but only one of our sets of offspring snacked on dal. I was determined to correct that imbalance.

I recently tried yet again to dig up that recipe because my son Henry (who has grown up in the years since, as kids will do) came home in March announcing that he’s vegetarian. Well, there you go: You send a kid to college hoping he will not merely learn but be changed by what he learns, and then you are stuck making supper for the human being who results from that endeavor.

The dal I now make is probably every bit as delicious as that earlier version. But I remain haunted by the memory of my lost dal, convinced that it was somehow more luscious, more aromatic, more… perfect. Memory has a strange way of prejudicing us against tasting what’s right in front of us.

Not likewise burdened by lentils of yore, my family thinks this version is the bomb, just as they love Peter’s lentil soup, openly and without resistance. I always make enough to have leftovers in the fridge, so that at snack time, when the kids automatically reach into the pantry for their go-to favorites, I can remind them an alternative is available. We all so quickly grow set in our ways. All the better, then, to be nudged toward surprise.

At first glance, the ingredient list looks long, but once you’ve collected your spices, it comes together quite easily. When preparing the aromatics, have everything ready by the stove before you heat your oil because the spices can burn quickly.

1 large red or yellow onion, half roughly chopped, the other half minced and reserved

Prepare the stew
Combine all 8 ingredients in a large pot (setting aside the half onion you minced). Add 7 cups of water, bring to a boil and simmer over low heat until the lentils start to break down, about 25 minutes.

Prepare the aromatics
Combine the cumin and mustard seeds in a small dish. In a separate bowl, mix together the minced onion and ginger. Place both dishes by the stove. In a medium skillet, heat the coconut oil over medium-high heat. When hot, add the seeds (watch out for spattering!) and cook briefly, tossing, just until they start to pop, about 12 seconds. Immediately add the onion mixture and sauté until golden. Mix contents of the skillet into the lentils along with the coconut milk, and heat just until hot.

Serve over rice, with fresh cilantro on top.

One thought on “Mouths to Feed: A Dal to Remember”