We figured out, after the fact, that the May 22 issue contained the 100th version of On the Spot, in which reporter Michael Turton asks the same question of three Highlands residents. I thought it would be a good time to ask Mike to ask himself a few questions.

Q: Is it easy to approach people?

A: I inherited the “talk-to-strangers gene” from my parents, but I still have to overcome a bit of nervousness when I approach someone I don’t know. I quickly learned that if you say, “Excuse me, I’m not a crazy man,” it doesn’t usually go well.

Q: How do most people react?

A: Most people are pleased to be asked. We all like it when someone pays attention to us and asks our opinions. Nine times out of 10, it’s a good experience for both of us.

Q: Have you had any embarrassing moments?

A: I was speaking to a couple in a coffee shop. They liked my question and debated who should answer it. When I said a photo was part of the deal, the man said, “Oh, no. We can’t do that.” Awkward pause. He said, “We’re not supposed to be here.” I figured they were skipping work or having an affair, or both.

Q: How do you come up with questions?

A: This might sound stupid, but I think. Virtually every question is something I’ve thought about at some point. I often think of questions around 3 a.m. or when I’m driving somewhere.

Q: Is there anything frustrating about doing “On the Spot”?
A: I never get to respond to my own questions, and I usually have a damn good answer. 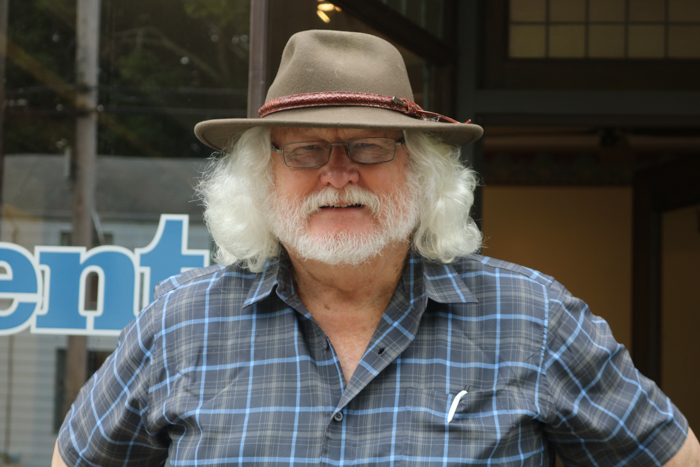 Mike Gets to Answer

What was the best thing about where you grew up?

Q: What surprises you?
A: Occasionally a question I consider very basic generates a great reaction. When I asked, “What’s your hot dog brand, how’s it cooked and what’s on it?,” it sparked heated discussions, even arguments.

Q: Is there a type of question people respond to best?
A: People have the most fun when they get to fantasize a bit. What actor would play you in a movie? If you could time travel, what era would you choose? What band would you love to appear onstage with?

Q: Do people ever suggest questions?
A: I had never used anyone else’s question until the May 29 issue. Zach Merante suggested I ask about the best advice people have received. A friend keeps urging me to spice up the questions, but my editor is pretty prudish.

Q: Have your questions ever annoyed anyone?
A: One week I asked four women (it included a mother and daughter) what trait more commonly associated with women might men benefit from adopting more often. The next week I asked four men (including a father and son) the same question, reversed. Some readers were quite offended, but the people I asked liked the question. They all put a great deal of thought into their responses. It prompted some good, serious discussions. I still think it’s a great question.

Q: Are some settings better than others to approach people?
A: My colleagues falsely accuse me of asking all my questions in a pub. I do use a couple of pubs, but coffee shops are better. The most fertile ground is outside a grocery store or shop as people are leaving. And shop workers like being asked; it gives them a break and they get to brag to their customers when The Current comes out.

Q: Are duplicate answers a problem?
A: Almost never. When I asked people to rank fall as a season, the first two talked about beautiful fall colors, crisp air. I was worried the third person would say that, too, but she said she hated fall. I practically hollered: “Thank you! Thank you! I love your negativity!” We had a good laugh.

Q: What are three of your personal favorite questions?
A: What three people, past or present, would you have lunch and drinks with? What was your most memorable early job? Do you believe in ghosts?

Q: Has anyone ever said a question was stupid?
A: That’s kind of a stupid question.

Q: What is next week’s question?
A: I have no idea.