With the exception of those at Indian Brook Falls and Little Stony Point, the Highlands’ trails are open daily once again.

Data from the New York-New Jersey Trail Conference shows that, before local trails were closed as part of the COVID-19 shutdown, more people than ever were downloading maps for Highlands trails — which is good and bad. It’s good that people are using the trails, but not so good that they are relying on internet maps.

Downloading an online map suggests an inexperienced hiker, and the Trail Conference won’t have its stewards in place at hotspots such as the Breakneck to discourage ill-prepared ascents until June 27.

If you’re an inexperienced hiker, what does that mean? It means that, more than ever, the onus is on you.

Daniel Schaublin, who lives in Beacon, is the former president of Hudson Valley Orienteering, which organizes trail races on unmarked courses; participants have to use maps and compasses to complete them. Schaublin also teaches orienteering and wilderness navigation with Thayer Leadership, which is based at the Thayer Hotel at West Point. He can go on for quite a while about hiking prep and common sense but agreed to give me the basics in five minutes for people who don’t know their azimuth from a hole in the ground.

This is nonnegotiable. You have a map on your cellphone, or you snapped a photo of the map billboard at the trailhead. But cell reception isn’t reliable in the woods, batteries run out, phones get dropped or wet. An inexpensive map from the Trail Conference will tell you everything you need to know.

Put it within reach. If you bury it in your backpack, you’ll hesitate to check it. You know the cargo shorts with the huge pockets that everyone mocks you for wearing? This is their time to shine. 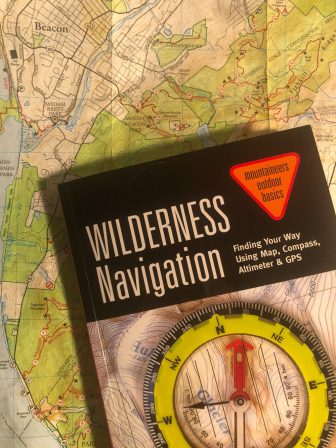 Seriously, get a paper map (photo by B. Cronin)

It doesn’t need to be fancy, but it shouldn’t be on your phone. It should be a flat, clear compass that you can lay on your paper map. You don’t have to be an expert: Line up the north arrow on the compass with the north arrow on the map and you’ll have a better sense of your bearings than the vast majority of the hikers you encounter. I’ve used little more than that technique to bushwhack to some of the Catskills’ untrailed peaks and back. And I am not that smart!

Of course, you won’t need to pull out that compass because you’re going to….

How long will the hike take? Is everyone in your group comfortable walking that long? How many intersections are there? What’s the forecast? When should you start hiking to give yourself plenty of daylight? When is sunset?

Figuring all of this ahead of time will make your life easier. And although you never want to hike in the dark if you’re not familiar with the trail, throw a flashlight or a headlamp in your bag for emergencies. (I realize your phone has a flashlight but we’ve covered that.)

Bring more than you need

It’s summer, and it’s hot. You’re going to get thirstier and hungrier than you expect. Shelf-stable, sturdy, calorie-dense food that can live in your backpack is an essential. “If you have a PowerBar, you can nibble on it forever,” Schaublin says. “It’s ugly, but it works.”

After years of overuse, the rocks and holds on Breakneck have been smoothed down like the floors of a Venetian church. If you’re going up, you’re going to need shoes or boots that grip.

For trails in the rest of the Highlands, you can get away with standard footwear if you are not equipped yet with hiking or trail-running boots (especially since I’ve already sold you on a map, compass, headlamp and box of PowerBars). In a pinch, most sneakers will work. But save the flip-flops for the beach.

It’s hard to get too lost

You can get very lost in the Highlands: I’ve run into people at the casino ruins on Mount Beacon who started on Breakneck without a map or water who were having one of the worst days of their lives. On the bright side, they were 30 minutes from Bob’s Corner Store.

One of the great things about hiking in the eastern Highlands is that you have Route 9 on one side and Route 9D on the other, not to mention a river as a landmark. If you’re truly lost, stay on the trail and head downhill.

You’re on your own

Accidents happen. Hikers twist ankles, break legs and suffer heart attacks. But Schaublin says first responders in the Highlands too often get called for rescues of people who could have hiked out on their own. As someone who has gotten himself into a fair share of trouble in the woods over the years, I can assure you that as long as you don’t panic, you’re capable of a lot more than you think. Especially around here, where you’re likely to run into other hikers and you’re surrounded by highways.