At its June 4 meeting, held by teleconference, the Philipstown Town Board proposed a six-month moratorium on development along Upland Drive and two side roads, Cliffside Court and Ridge Road, and scheduled a public hearing for July 9.

Ascending sharply on a hillside, Upland Drive, a narrow private road in Garrison, connects Old Albany Post Road and Winston Lane. In places it resembles a rocky path, with deep ruts after heavy rain. In recent years Town Board members and some Upland residents have expressed increasing alarm over its deterioration. 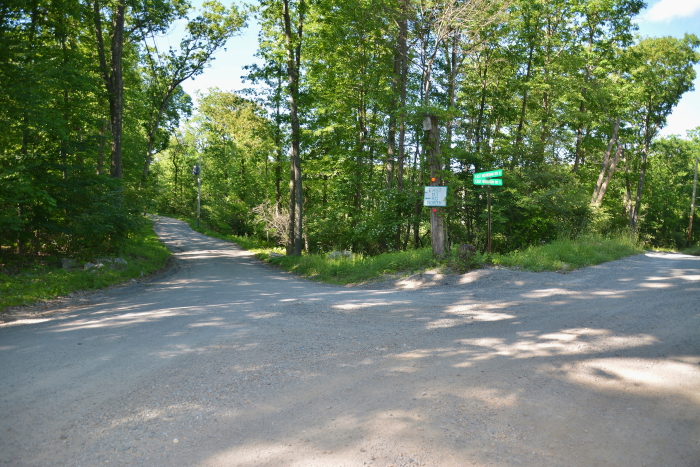 Philipstown plans to pave a half-mile stretch of East Mountain Road South (foreground) up to its intersection with East Mountain Road North (center left) which is already paved, but neighbors have raised concerns. (Photo by L.S. Armstrong)

If enacted into law, the moratorium would prohibit new applications for development along Upland and suspend existing ones; it could be extended for up to a year.

The draft notes that Putnam County, which owns “substantial acreage” along Upland, has been trying to sell off land. According to the draft moratorium, “new, additional development poses a potential danger to public safety because of increased traffic on substandard roads.” It states that the board could rezone the area to preserve the environment and neighborhood character and “promote orderly development.”

At budget hearing last fall, board members observed that the Highway Department agenda for 2020 included paving about half a mile of East Mountain Road South heading northeast to a T-shaped intersection with East Mountain Road North.

On June 4, Vit Horejs told the board that about 125 residents have signed a petition because of their concern that all of East Mountain Road South would be paved through to Dutchess.

Supervisor Richard Shea said he understood the concern but that the probability of that happening was “extremely low.” He said the proposed Philipstown project is simply tying together two paved roads separated by a dirt stretch. Shea promised that the board would review the residents’ petition but that “in all likelihood” the paving is going to happen.

The board authorized the replacement, by 2030, of vehicles owned by the town with newer models that have better fuel efficiency. The policy is part of the town’s Climate Smart Communities program. It will exempt, at least initially, heavy-duty trucks and passenger vehicles because of the lack of more fuel-efficient models on the market.

In its resolution, the Town Board said that town-owned vehicles account for 55 percent of greenhouse gas emissions in municipal operations, and that the upgrade would not only save money and decrease pollution but ease maintenance. “There’s no downside,” Shea said.

The board passed a resolution endorsing the proposed New York Health Act, which would establish statewide comprehensive health care coverage. The state Assembly has approved the NYHA, but the Senate has not.

As proposed, the program would be funded by a payroll tax and a tax on interest, dividends and capital gains, Proponents say it would reduce health care expenses for as many as 98 percent of state residents and save the state and municipalities millions of dollars.

More than 400 individuals signed a petition encouraging the Town Board to support the NYHA, including residents of the Highlands, the Hudson Valley and other states.