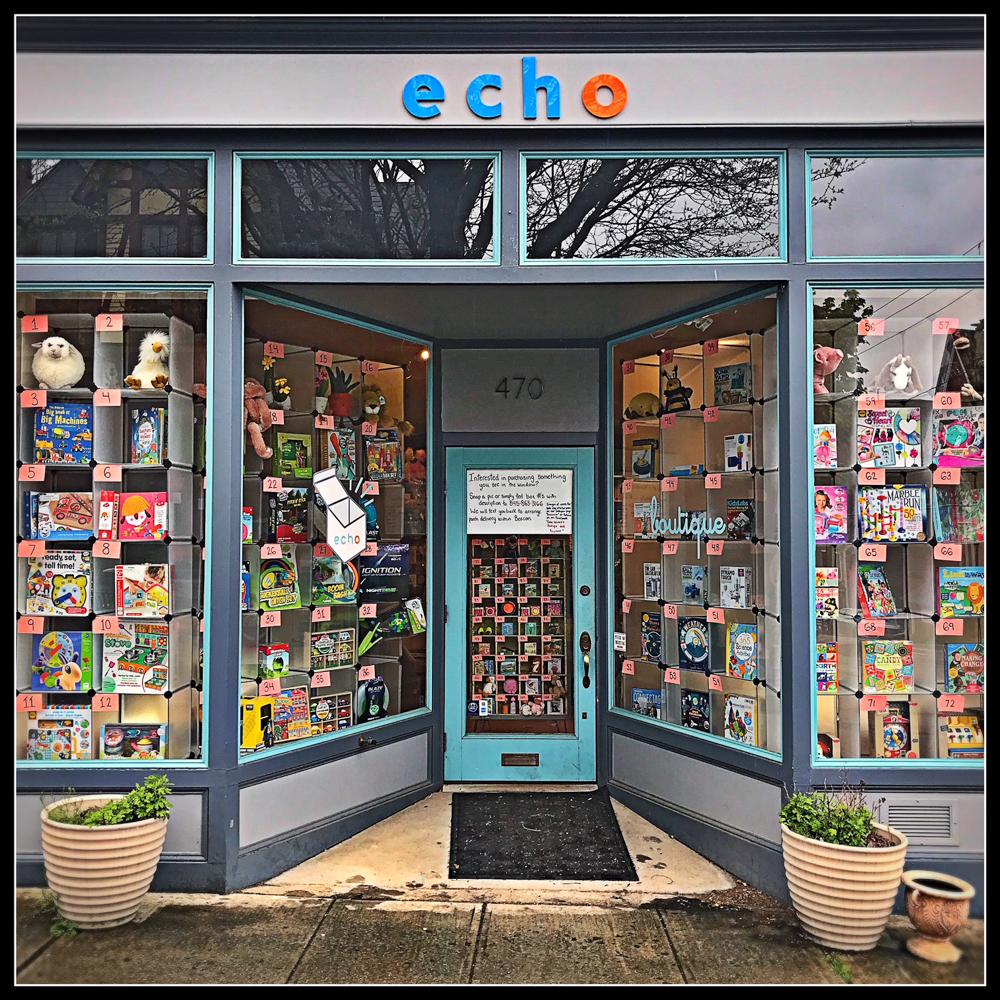 As one of Beacon’s longest-lasting retail shops, Echo Boutique and Toy Store has had a prime double-fronted spot on Main Street for nearly 20 years, and re-invention has always been in the tool-kit for owner Karen Donohue.

The challenges of the pandemic shutdown have kept Donohue on her toes, and she’s fording her way through with some creative merchandising aimed at making it as easy as possible for people to browse and buy without entering the premises.

Working with the toys and other children’s goodies she sells, Donohue stacked her window and door displays with more than 100 cubes, marked each one with a number and placed an item inside. Anyone interested in purchasing the item was instructed to call the store with the number and the item would be delivered to their porch, or could be picked up from hers. She also added inventory to Instagram and Facebook. 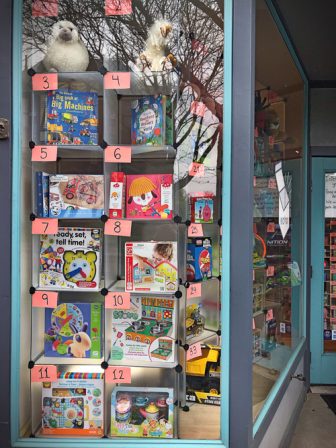 “I’ve always liked the cube idea,” Donohue explains. “I was approached years ago to open a toy store in Grand Central Station. I couldn’t do what they wanted me to do, which was a $50,000 build-out, plus I didn’t want to be underground every day. But I had come up with an idea for how it could work: the entire store filled with cubes, one toy in each, and customers would have scanners and click on each item they wanted. The orders would be sent to the register, which would have all the items ready when you checked out.”

Donohue says she closed Echo to browsers before it was mandated by the state. “This store is very much an experience — you come in and you touch everything — so it didn’t feel good to allow people to continue doing that. And if the perception was that I was putting people in danger by staying open, that could affect sales.”

Initially interested in photography, Donohue worked in a photo store, then as a photographer’s assistant, and, eventually, a prop stylist, largely for food shots. “I’d find 50 bowls and hear, ‘We like the shape of that bowl, but we’d like it with a blue rim.’ ”

Though she considers herself shy, Donahue also describes herself as a lifelong entrepreneur. “As a kid I set up a stand to sell seashells and rocks — on a dead-end street.”

With no background in retail, Donohue opened Echo as an art gallery to display her mother’s hand-painted tables. Her first space was 10-by-10 feet and open only on weekends. Donohue stayed for three years, adding soaps and windup toys on the tables, and repeatedly asking herself, “Oh my gosh, what am I doing?” 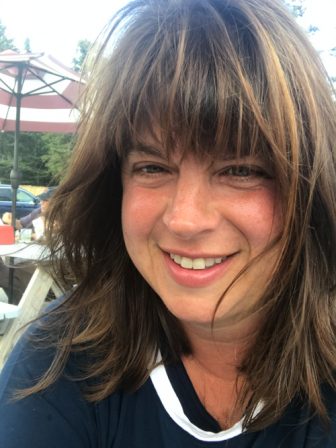 In time, Echo moved around the bend into a bigger space and, with it, Donohue gave up the prop styling to devote all her time to retail. “I expanded the toys, then added baby outfits,” she says. “I like displaying things.” Next, she dabbled in women’s clothing but found the space was too small for so many types of merchandise. “Everywhere I’d slice it, people would come and be confused,” she says.

She moved again, to her current location on Main Street’s east end. “The influx of people with small children was starting to happen,” she says. The store focused on classic toys, and she relied on her instincts for women’s clothing.

“Initially I followed someone else’s advice: ‘You should get skirts because it’s an easier fit for most people as opposed to pants.’ But I dug into what I liked. I would go to the trade shows and would walk the aisles, looking at the displays. I only bought things that I loved. I’d say, ‘I want that shirt in red.’ They’d reply, ‘But our most popular color is blue.’ ‘I don’t care, I like the red.’ By doing it that way, it became a collection. I expanded to shoes, jewelry and scarves.”

Donohue says that “sometimes the way I dress, I can’t believe people are asking me for advice. But if they’re willing to try on a bunch of things and stand in front of the mirror, I’m able to hand them the outfit that will work. If you know the line and the way it’s cut, you can advise people.”

Donohue is a wistful about the changes in Beacon over the past few years. “We have had more people and more sales, but at a certain point to me it lost something,” she says. “The conversations with neighbors happen less frequently. There are more people who come in with the mindset that they can hand toys to their children to play with — and frequently destroy — while they browse. It has made things difficult.”

With the very recent advent of a return to in-store shopping, with guidelines, Echo is slowly inviting customers in again, for limited hours, while still continuing to offer porch deliveries. As of earlier this week, tentative plans were to open the store this Saturday and Sunday from 12 to 4 p.m., but it’s best to check Echo’s social media pages and website for the latest details.

“We can keep limping along,” Donohue says. “But if this is the forever plan — wearing masks and staying 6 feet apart — my business is personal. It’s a lot of ‘What do you recommend for a 5-year-old?’ We’ll try our best and wait and see.”