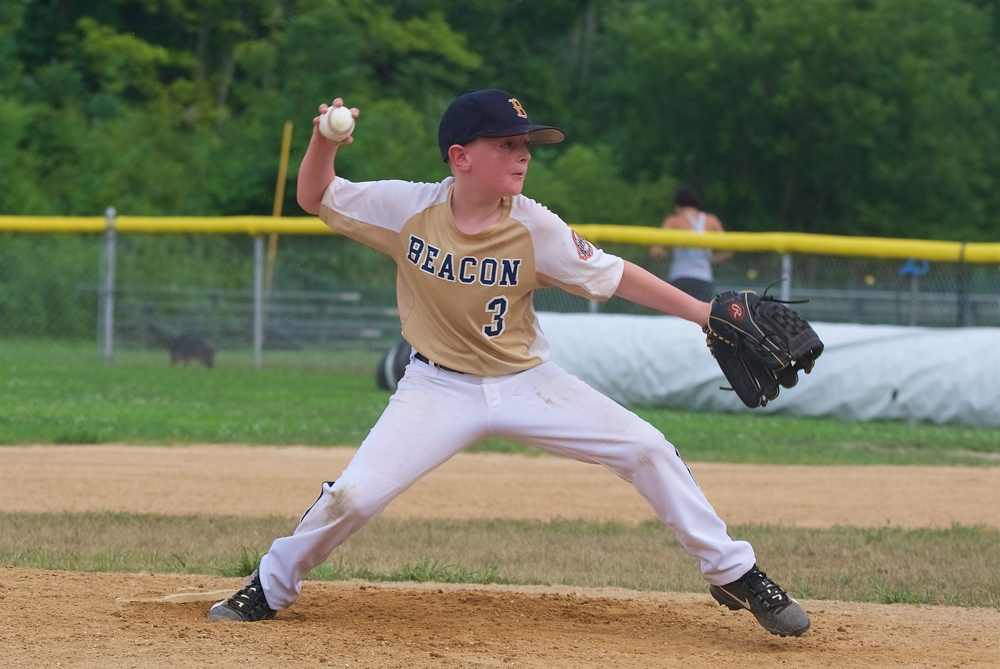 Aiden Heaton delivers a pitch last July for the Beacon 10U travel team during a win over the Northern Dutchess Rebels. (File photos by S. Pearlman)

If things continue to go well with the state’s reopening, there could be some happy young baseball players hitting the field for games after Independence Day. The Greater Hudson Valley Baseball League, which has more than 700 teams, including three from Beacon, is planning to begin its summer season on July 6.

Some questions remain because of the COVID-19 shutdown, such as which health protocols players, coaches and umpires must follow; the number of fans, if any, who can attend games; and whether towns and schools will allow the use of their facilities.

Since the Mid-Hudson Region began Phase 3 of the state’s reopening plan on Tuesday (June 23), teams have been able to practice in small, socially distanced groups, said David Zaslaw, the GHVBL’s founder and president. The league has spring, summer and fall seasons; the spring season was canceled due to the shutdown.

“The kids need to get out,” Zaslaw said. “They’ve been cooped up.”

The league’s Connecticut-based teams began playing on June 24. Gov. Andrew Cuomo has said teams in New York must wait, but “with kids getting ready, we can hit the ground running on July 6,” Zaslaw said. 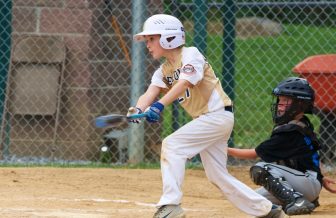 Nolan Varricchio connects at the plate last July for the Beacon 10U travel team.

Bob Atwell, the baseball coach at Beacon High School, coaches a team of players ages 13 and younger. There are also Beacon teams for players 11 and younger and 12 and younger.

“We just had our first socially distanced practice,” Atwell said of his 13U team. “You just keep them separate and they don’t use the same bats. And coaches will meet to decide more protocols if necessary.

“The teams and coaches are ready, but I’m not sure our national situation is ready for it,” he added. “The response from our parents has been concern, although there is also excitement for the kids to get started. Baseball is a much lower-risk than some other sports, and is one of the best options.”

Another challenge for the league, Zaslaw said, is that town and school fields are not expected to be available until the Mid-Hudson Region enters Phase 4, although that could happen as early as July 7.

“Some towns are ready for practices and games,” he said. “But some in lower Westchester aren’t quite ready. Still, I’m confident we’ll get fields.”

Zaslaw said Dutchess County Executive Marc Molinaro and his office have been pushing to get players back on the field. “He has probably been our biggest advocate,” Zaslaw said.

League officials were pleasantly surprised when 440 teams registered for the summer. “I thought some might hesitate,” Zaslaw said. The league typically has a 45-game schedule; despite the late start, teams should still each play 42 games by extending the season into August.

“We don’t want the kids to get cheated out of anything,” he said. “It’s a challenge for everybody — not just the league, but the kids as well. They lost their spring season, so they’re champing at the bit.”

A number of protocols will be put into place during games. Players and coaches not on the field will wear face coverings and maintain social distances, and players, coaches and umpires will not touch each other.

If spectators are allowed, each player will be allowed two fans who will be required to practice social distancing, as well.

“Some say our rules are stringent, but safety is No. 1,” Zaslaw said. “We are maintaining the integrity of the game inside the lines. But we will continue to take our lead from the government.

“At this point, everyone is happy to be on the field,” he said. “If they have to wear a mask, I think they’ll happily do that.”

He said that coaches and umpires will enforce the protocols, and that he hopes spectators will use common sense.

“The coaches can keep the kids under control,” Zaslaw said. “Kids are fast learners, and they will get acclimated to the new rules quickly.

“Hopefully, this is not forever,” he added. “We want to get back to baseball — the way it was meant to be played — soon. But for now, and in the fall, we have rules in place and we’ll adhere to those.”