A notice in the Baltimore Sun read: “If this should meet the eye of Henry Currie, supposed to be in Baltimore, and lately from Matteawan, Dutchess County, N.Y., in search of his mother and sister, and he will call at No. 357 East Fayette St., he will hear of something to his advantage.”

John Schmidt, a German bricklayer described as “deaf and dumb,” was killed by a southbound train as he watched the horse cars carry brick from Driggs’ yard near the Dutchess and Columbia Railroad junction. In addition, William Townsend, a brakeman for the railroad, was killed when his head hit an abutment.

The Brooklyn Daily Eagle reported that some residents of Fishkill Landing wanted to change its name to Ontiora [probably Onteora, said to mean “hills of the sky”].

Looking toward Newburgh in the 1880s, with Fishkill Landing (Beacon) in the foreground (Beacon Historical Society)

The first car traveled the 6-mile electric railway stretching from Fishkill Landing to Fishkill. The fare was 5 cents to the Matteawan border and 5 cents from there to the village. While excavating for the tracks, workers found a number of planks laid 44 years earlier for the old plank road. They also recovered copper cents and an iron bullet that was probably from the Revolution.

The Fishkill Landing correspondent for the Poughkeepsie Eagle-News asked: “Is there no law to enforce the closing of the three saloons of this village on Sunday?”

A tramp known only as The New York Pug was killed in Newburgh after being stabbed five times in the neck by another tramp known as The Harlem Spider.

Timothy Welch, 50, hanged himself with a bedsheet at the Matteawan Insane Asylum. His only known relative was a brother in the Willard Insane Asylum.

Frank Sutton was acquitted in Brooklyn of burglary but sent to Matteawan to face charges that he broke into the post office and shot a police officer. A Brooklyn newspaper noted that “throughout the trial, a beautiful young woman, fashionably attired, sat in the front row of the space reserved for spectators. She never once took her eyes off the prisoner, and when the jury returned the verdict of acquittal, she hurried to him, and wrung his hand, laughing and crying in return… It is whispered that she is the wife of a wealthy lumber merchant of Cleveland, whom she left for Sutton.”

The state superintendent of public instruction held a hearing in Albany for Herbert Pinckney of Fishkill Landing and W.S. Allen of Matteawan, who were appealing a decision to revoke their certificates for “conduct unbecoming teachers.” According to the testimony, Pinckney and Allen had written letters to local newspapers in defense of a “lady teacher” who had been dismissed for whispering during a lecture at a teachers’ convention.

Sarah Ann Smith, 76, a resident of Mountain Lane in Matteawan, received a mother’s pension after 12 years of filing claims based on the death of the youngest of her three sons to serve in the Civil War. She was awarded a back payment of $3,465 plus $12 a month.

After Harry Montross of Matteawan failed to show up for his wedding to Bessie McCormack, 18, of Newburgh, her mother took it in stride, saying: “He’s not the man for Bessie.”

Beniah Horton, 27, a merchant from Fishkill Landing, was arrested in Brooklyn on charges he refused to leave the home of his ex-fiancée. A magistrate advised him to find a new girlfriend.

Henry McCloskey of Fishkill Landing, who claimed to be a cousin of the late Cardinal John McCloskey [the first American to hold that position], drowned in the Hudson while bathing.

Joseph Seman, who claimed to be a Belgian count left penniless by the war except for a 1,200-acre estate ravaged by the Germans, found himself in the Dutchess County Jail on charges of stealing clothing, watches, fountain pens and handkerchiefs from rooms at the Hotel Bennett in Beacon. Seman told police he needed money because a woman he married three months earlier in Sacramento, California, had disappeared with everything he owned.

Edgar Fraleigh returned from Pontiac, Michigan, where he purchased a GMC chassis to begin a bus line to Poughkeepsie.

Following a visit to Colorado, Arizona and New Mexico, Edward Corwin of Beacon lectured at public schools in New Jersey about the Pueblo Indians.

Police arrested Princess Rosie Mitchell, a member of a “gypsy royal family” in a traveling carnival, on fraud charges. Although only 13, the princess had become “engaged” during an elaborate ceremony in Poughkeepsie to another member of the carnival, John Evans. When the troupe arrived in Beacon, Evans accused Rosie of stealing $2,000 from him. Her father, Henry Mitchell, then had Evans arrested on a charge that Evans had stolen $1,000 from him. A week later, both men withdrew their charges; Mitchell allegedly told Beacon officers he didn’t need the written law to get justice.

Barbra Wildbrett and Hugo Strangmueller eloped to Kingston and were married a few moments before her father arrived from Beacon.

After securing his hydro-aeroplane license, John B.R. Verplanck organized a squadron of three Curtiss boats that he called the Verplanck Flyers. The pilots took people for short trips around Newburgh Bay but declined to do stunts. 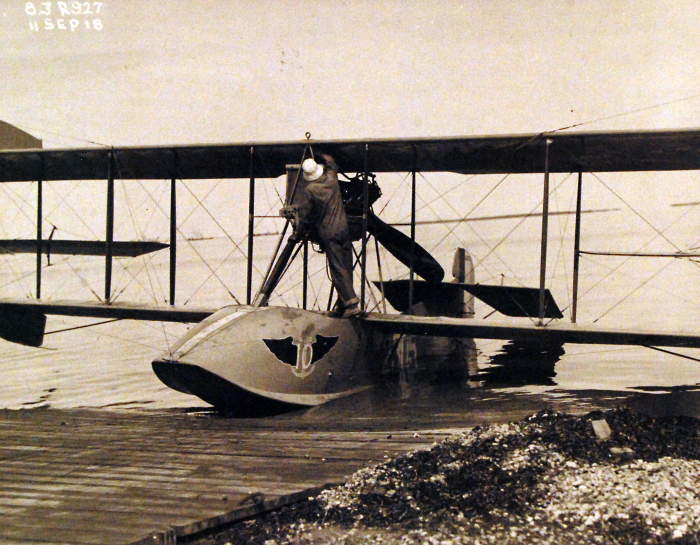 In 1920, John B.R. Verplanck of Beacon organized a squadron of three Curtiss flying boats such as the one shown here. (U.S. Navy)

A former Beacon man, 25, and two 16-year-old girls drowned when their canoe capsized in Orange Lake near Newburgh. The sole survivor said the boat flipped when one of girls wanted to switch seats.

On a Sunday morning, guest speakers from the Anti-Saloon League took over the pulpits at four churches to urge support for the 18th Amendment, which banned the sale of liquor.

After Joseph Muranski was charged with stealing $1,400 and jailed for seven days on a complaint by Joseph Vidoc, Muranski sued Vidoc for $5,000 for false arrest. Muranski said he had accused Vidoc of being unfaithful to his wife. Once released for lack of evidence, Muranski signed a complaint to have Vidoc jailed, noting he was not a U.S. citizen and claiming he said he would leave the country before paying any judgment.

The parents of a toddler who suffered a broken leg when he was hit while riding his tricycle on South Street sued the driver for $5,000, but a jury dismissed the case.

The Dutchess County Health Association reported that, over three days, 1,429 Beacon and Fishkill residents had been X-rayed to check for tuberculosis.

An inmate at the Rochester State Hospital who had killed a fellow patient with a snow shovel was found to be “dangerously insane” and transferred to the Matteawan State Hospital.

Although the Beacon Democrats nominated Reginald Conkling as their candidate for mayor, he refused the designation and called for Beacon to adopt a form of government led by a city manager.

Playing in the rain on a muddy field at Memorial Park, the Poughkeepsie Police Department softball team defeated the Beacon police, 12-5. 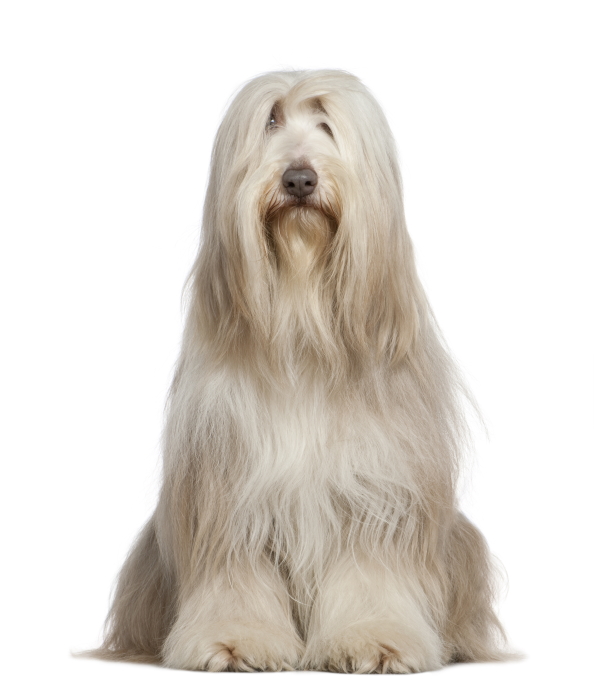 Dogs owned or bred by Cauldbrae Kennels in Beacon won Best Puppy, Best Adult and Best in Show at the first Bearded Collie match held in the U.S.

Figures released by the Census Bureau showed that while the population of Dutchess County had jumped by 24 percent since 1960, Beacon’s dropped by 7 percent, to 12,900. Concerned the city would lose state and federal aid, Mayor Robert Cahill demanded a recount, saying the census takers had not picked up 17 completed forms and that at least 25 people were missed on a street where most residents spoke Spanish.

People Against Pollution congratulated the City Council for its decision to stop using DDT to kill mosquitoes.

Superintendent Donald Sipe resigned unexpectedly, saying that any school leader could only be effective for about five years and he had been at Beacon for six. He was hired by the district in 1962 as the high school principal.

The city received a $10,800 state grant for its rat-control program.

Benjamin Cohen, chair of the local Conservative Party, was robbed at gunpoint of $1,500 at his salvage company on Long Dock. “I’m not blaming this robbery on the police,” he said. “I’m blaming it on the police chief [Samuel Wood], who refused to issue me a pistol permit.”

The body of a Beacon High School freshman was found in Fishkill Creek a week after his parents reported him missing when he did not return home from school. Police said he may have fallen from a cliff into the water.

Despite strong opposition at a public hearing, the City Council banned the possession of alcohol on city streets and in public parks. One man noted the law prohibited beer at softball games, while another complained: “We may as well live in Russia. Isn’t drinking better than drugs and stuff?” The council also lowered the speed limit in parks to 15 mph from 30 mph because of an onslaught of mini-bikes. 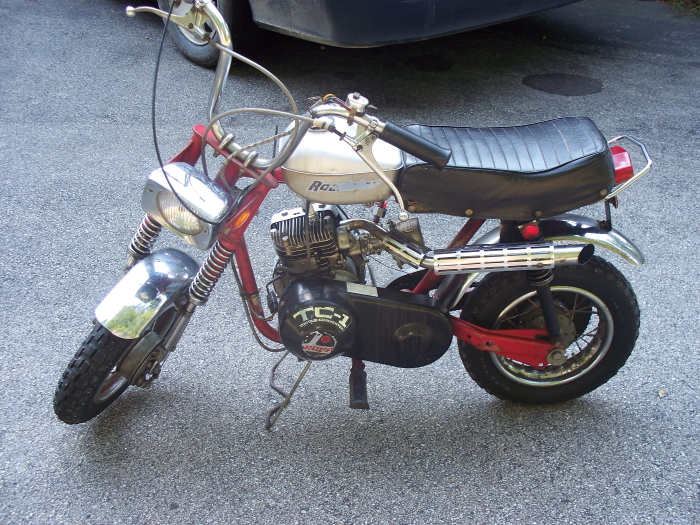 Riders of mini-bikes, such as this 1970 Rupp Roadster, caused Beacon officials to lower the speed limit in city parks. (Wikipedia)

Dutchess County began designing a $1.3 million transportation center to be built on land owned by the Beacon school district adjacent to Dutchess County Stadium. The center will allow commuters to make connections with the Dutchess loop bus.

Danny Soto threw a one-hitter, including 13 strikeouts, for Beacon High (17-4) in a 3-0 state tournament victory over Pearl River.

The Poughkeepsie Journal called for city officials to save the long-empty Beacon Theatre, whose owner, Guido Copolino, said he wanted to convert it into apartments and offices.

A 17-year-old Beacon High School student drowned in Sylvan Lake during a graduation party, despite the efforts of a lifeguard who saw him go under, pulled him from the water and performed CPR.

About 75 protestors marched from downtown Peekskill to Indian Point to demand the nuclear plant be shut down. “These plants are only 30 miles from New York City, and 10 percent of the world lives within 60 miles,” said Lucille Weinstat, a member of the Beacon Sloop Club. [The plant will shut down next year.]

Twenty-one teenagers from Bechyne and Sedlec-Price in the Czech Republic arrived for a two-week visit sponsored by the City of Beacon.