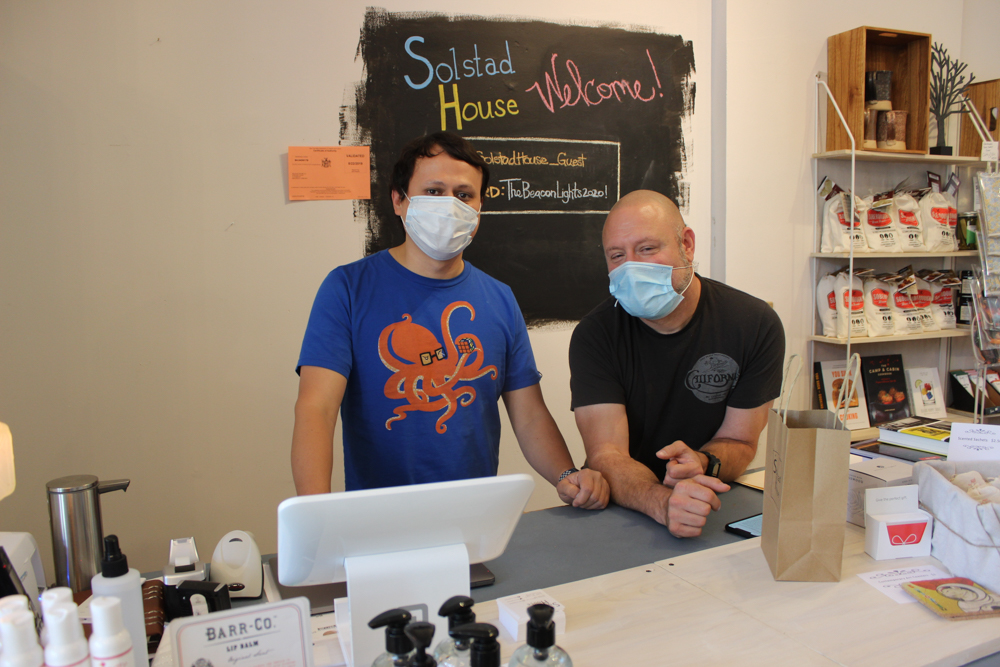 Frankie Martinez and Steve Yount. "I promise you, behind these masks, we are smiling," Martinez says. (Photos by A. Rooney)

Like many others before them, Frankie Martinez and Steve Yount set their sights on having a weekend home in the Hudson Valley.

The couple had a look at Beacon and found it had a similar vibe to Asheville, North Carolina, the artsy city in the Smoky Mountains where Yount grew up.

They bought a house and soon the weekends expanded into the weekdays. Three years ago they left Brooklyn and came north full-time with their five dogs (now six).

Not long after that, they decided to open a business. Yount has experience in retail; he was an operations manager in the early days of Bed, Bath and Beyond, among other management positions. Martinez works in software development.

Their first thought was a restaurant featuring Venezuelan street food because Martinez is from Venezuela and his mother is an amazing cook, Yount says. But the licenses and paperwork were daunting. They reconsidered and settled on the idea of “a cute little shop” they could use to publicize senior dog rescue. 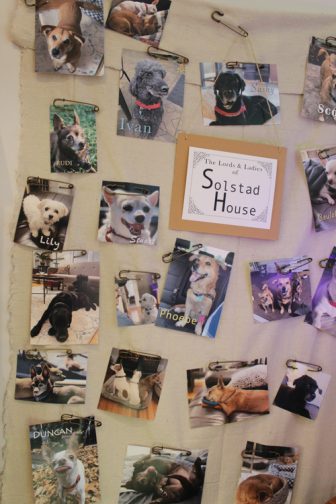 Their mutual affection for older dogs began with an 8-year-old who thrived in their care and lived to age 17. “This was a dog who had lived her whole life getting nothing,” Yount says. “Once she got love, it doubled her life.”

The retail concept was “a community general store that focuses on handmade products,” Martinez says. They called it Solstad House after a band Yount played in while living in Brooklyn, which in turn was named for a character in the Paul Thomas Anderson film, The Master.

The shop, located across the street from The Roundhouse and down the hill from the dummy light, opened on Nov. 1. After strong holiday sales, it had to close to customers in March because of the pandemic. Fortunately, the early sales have helped them weather the shutdown.

“We are very much skewed to locals, maybe because we’re off the beaten path and there’s no stampede of tourists, like on Main,” Martinez says. “We’ve made so many great friends, human and canine. We’ve survived the past few months because the town decided we would survive.” 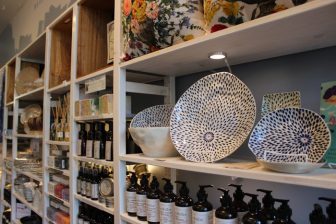 The shelves at Solstad House

The partners, who have been a couple for 20 years, find stock by scouring trade shows “for what could fall under a rustic Scandinavian aesthetic,” Martinez says. “We want to feature mainly handmade artisan products, made in America, and preferably made in New York, from a good mix of minority-owned businesses — basically, small companies with people doing it themselves.”

The rear of the store is home to an array of vintage lamps; 100 percent of each sale is donated to an organization based in Tennessee called Old Friends Senior Dog Sanctuary. “I’m part of a large Southern family and had to endure big family meals with crazy old lamps!” says Yount. “This started out as nostalgia, but we discovered each lamp had quirk and character.”