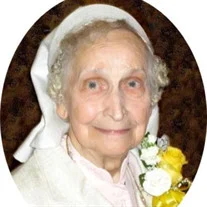 Sister Agnes Clare Vitale, 100, a Franciscan Sister of the Atonement from Graymoor who survived bombings and hunger while helping orphans in Italy during World War II, died on July 2 in the Lurana Health Care Residence at St. Francis Convent in Garrison.

Born Nov. 26, 1919, in the Upper East Side of Manhattan, as Josephine Marie Vitale, she was the daughter of Vincenzo and Carmela (Salvino) Vitale. She was raised in Brooklyn.

While in high school, Agnes attended an inspirational vocation fair offered by religious orders. She decided to become a missionary and, on March 29, 1937, at age 18, she entered the community of the Franciscan Sisters of the Atonement. As a novice, on Sept. 29, 1937, she received the name Sister Agnes Clare. She professed her first vows on Oct. 1, 1938, and her final vows on Sept. 2, 1944.

Over her 82 years as an Atonement missionary, Agnes served in various areas of parish, catechetical and pastoral ministries. Her missionary endeavors abroad included a 12-year assignment in Rome from 1939 to 1951 at our convent at Via Monte del Gallo.

While in Italy during World War II, she cared for war orphans. Agnes shared that she endured near-starvation, lack of running water, diseases, bombings and death threats. Several of the orphans from those years remained in touch with her for years — a couple of them until her death.

Agnes said she loved each of her ministry assignments; she was known for her generosity and hospitality, and had a special fondness for children and in reaching out to others in need, the colleagues said. She made many friends in Amsterdam who continued to write, visit and send gifts to her and the other Sisters, even after she returned to Graymoor.

She is survived by a brother, Thomas Ventura and several nieces and nephews. A wake was held July 2 at St. Francis Convent and a funeral Mass on July 3. A memorial service with family and friends will be held at a later date. Memorial donations may be made to the Franciscan Sisters of the Atonement, 41 Old Highland Turnpike, Garrison, NY 10524.