Snakebitten is slang for someone who is unlucky. For Neal Zuckerman, the word sprang to life while he was hiking off Fort Defiance Hill Road in Philipstown.

“It felt like a razor blade had just sliced my finger open,” said the Garrison resident, who was bitten by either a timber rattlesnake or a copperhead, both found in the Hudson Valley, on the morning of May 25. 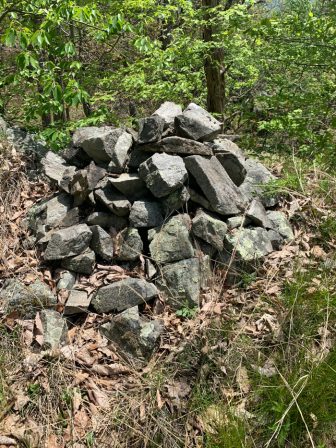 The cairn where Zuckerman was bitten

Zuckerman, who is a senior partner and managing director in the New York office of the Boston Consulting Group and the Putnam County representative on the Metropolitan Transportation Authority board, was shoring up a stone cairn built as a memorial to his father-in-law, who died 15 years ago. As he reached down to rearrange the rocks, a snake bit him on the middle finger of his right hand. Thankfully, he said, “I’m a lefty.”

It would be his only good luck of the day.

“It happened so fast I didn’t see the snake,” Zuckerman recalled. But two fang marks removed any doubt as to what had happened. And it quickly became obvious the snake was poisonous, he said. “Within an hour, it was the most intense pain I’ve ever had.”

The swelling began almost immediately, eventually traveling up Zuckerman’s arm past his elbow. “It was traumatic,” he said. “You’re alone in the woods, on a mountain, and you’re starting to sweat.”

A West Point graduate, Zuckerman said his navigation skills and knowledge of the terrain helped him keep his wits. He called his wife, Heather, staggered out of the woods, and met her at the nearest road. Within 25 minutes, he was at the emergency room at NewYork-Presbyterian/Hudson Valley Hospital in Cortlandt Manor. Because of COVID-19, Heather Zuckerman was not allowed in. 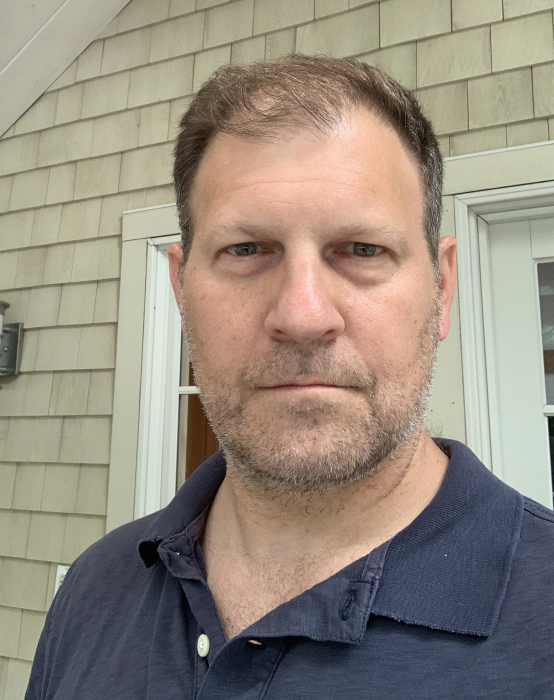 Neal Zuckerman, on the mend

Zuckerman was immediately given painkillers but said he had to beg the doctors to inject antivenom. He said he was asked what seemed like “hundreds of times” what had bitten him.

After three hours, he was transferred to Westchester Medical Center by ambulance.

“My wife and I became instant snake experts,” Zuckerman said. They spoke by phone to a snake expert in Montana. His wife called Jacobi Medical Center in the Bronx, which has a Snakebite Center that treats about 10 patients a year with help from herpetologists at the Bronx Zoo, which resulted in a conversation between doctors there and staff at Westchester Medical.

“You’re supposed to be given antivenom within two hours for maximum benefit,” Zuckerman said, but he did not receive an it until eight hours after the bite. “My arm was extraordinarily large and painful at that point.”

As he awaited treatment, Zuckerman said he was frustrated by a continuing debate among the medical staff about which type of snake had bitten him, especially since only timber rattlesnakes and copperheads are found in the Hudson Valley and the same antivenom, called CroFab, is used for a bite from either snake.

Choose your poison: A timber rattlesnake, or a copperhead

He suspects the culprit was a timber rattlesnake because its bite is more severe than a copperhead and its venom reduces the blood’s ability to clot. Zuckerman said his blood tests suggested that had happened.

The antivenom he received at Westchester Medical Center did not bring immediate relief. Zuckerman said he was in pain for about 24 hours after the bite. “It’s unclear if that was because it took so long [to get the antivenom] or because it takes that long to work through the system,” he said.

Six weeks after the bite, Zuckerman’s finger looks much better but is still swollen. He continues to receive treatment from hand specialists at NYU Langone Hospital in Brooklyn. 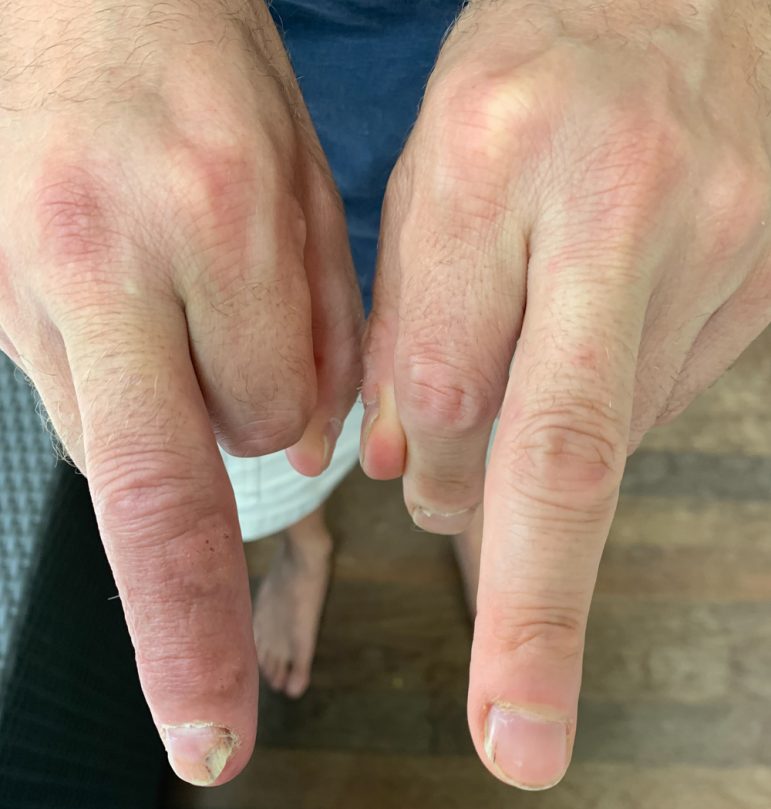 He said the scariest moment wasn’t being bitten, or staggering through the woods. “It was being alone in that hospital, surrounded by COVID-19, and not having them do anything,” he said.

Like many trauma victims, he sometimes relives the incident. “It does come up occasionally,” he said. “It definitely comes up.” He adds: “I never worried about snakes” but now has thoughts of Harrison Ford in the snake-filled tomb in Raiders of the Lost Ark.

“Maybe I have a fear of snakes now,” he said. “Or maybe just a very healthy appreciation for avoiding them.”

Zuckerman has advice for those who spend time outdoors. “Don’t pick up rocks in confined spaces and be aware of your surroundings,” he said. If bitten, “get yourself to Jacobi Medical Center.”

For a more graphic view of Zuckerman’s finger soon after the bite with the fang marks visible, click here.