Pamela Zaremba recalls sitting in the Beacon Artists Union gallery on Main Street during a showing of her photographs and having people wander in and presume she was the gallery owner, not the artist.

“They discussed what they thought the photos meant,” she says.

She says she was happy to hear their reactions to, and interpretations of, her intentionally ambiguous photographs.

“I’ve always had a different lens on what I see as beauty,” explains Zaremba, who has been a member of the BAU collective for five years. “I find it in abandoned buildings — I start thinking of people coming and going in and out of them, and the special light they have.” Or it might be “a cloudy aqua bottle from the past that takes on human qualities when held in a certain way.” 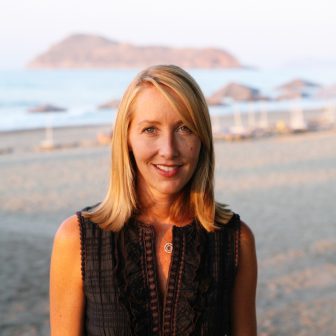 Her fine arts series have included meditations on disembodied vanity, apparitions, enchantment, home-wreckers and resurrection. Her goal, she has written, “is to distill the human and sympathetic qualities from these places so that others may see life the way that I see it.”

She was the youngest child in her family, and her father pushed her to study business. But she spent her junior year abroad at the London Polytechnic [now the University of Westminster] studying art, which cemented her affinity.

After graduating, Zaremba, who was raised and lives in Connecticut, found a job in the creative end of advertising. She moved to Dallas for six years, where she did mostly commercial work, including a shoot in Mongolia for Polartec fleece outerwear, before coming to New York. She married at age 31 and had two daughters (now 12 and 18), which made commercial work difficult. Instead, she focused on her fine art photography.

One of her current projects is Portrait Stories, in which she works with a young subject on a series of photographs to tell a story that he or she creates based on fairy tales.

“We talk about the story as we’re shooting it,” Zaremba explains. “We usually know the beginning and end, but we let the middle unfold. Some girls, for instance, would rather be the wolf than Red Riding Hood. The stories always wind up showing a transformation.

“Before I had children, I wanted to make things perfect,” she says. “Now the projects come more easily. I love building stories around the imagination of children. It’s the world I live in — the subconscious.”