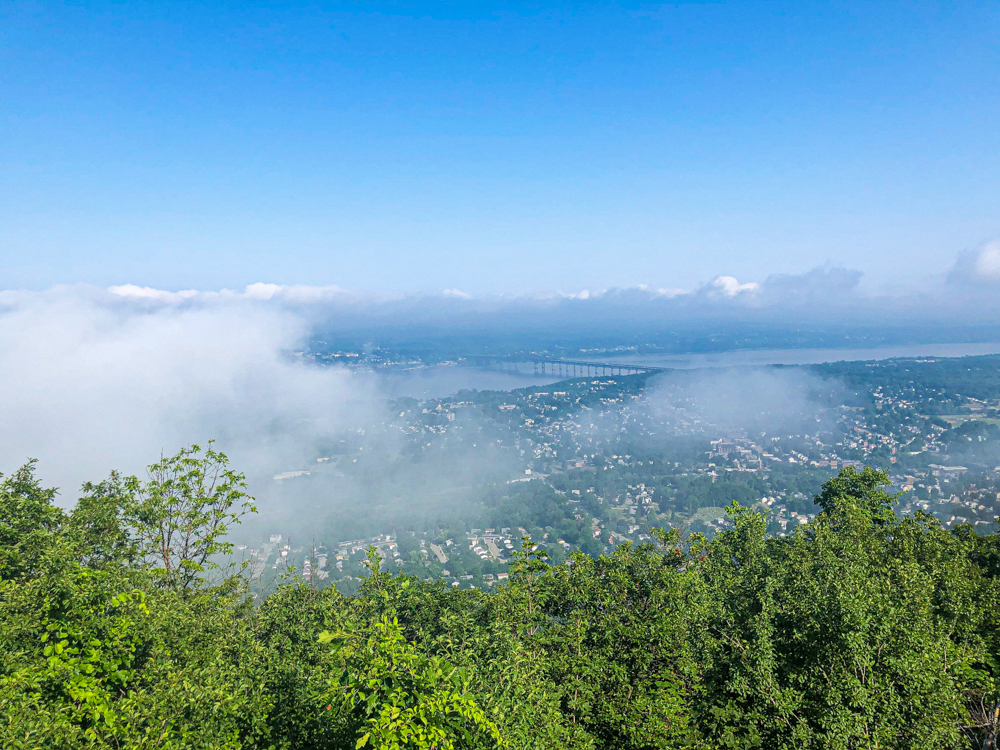 The clouds lifting over the city (Photos by B. Cronin)

I’ve never been happier to be in a thunderstorm than the one I was in last week running down Mount Beacon.

It’s not like the storm surprised me: From the south summit I could see the gray clouds lined up like infantry, marching down the Hudson River to deliver, as an old friend of mine from Alabama used to call it, “a gully washer.” And it’s not like I minded getting wet: I was already soaked from a cooling dip in a swimming hole mid-run.

It was the ferocity of the storm that pleased me most, with the wind whipping at frightening speeds, the rain limiting visibility, the trees bending sideways and the cannon shots of thunder bouncing from peak to peak. It pleased me because it felt as if the mountain were asking me a question: You missed me during those months of lockdown — but do you still miss me after all of this?

I was happy to realize that I did.

I hadn’t been on Mount Beacon since last winter. Even before the trails were closed because of fears of overcrowding that could spread COVID-19, the New York-New Jersey Trail Conference in late March began asking hikers and runners to stay away.

I stuck to the flatlands, but it wasn’t easy. We all have places that we have missed over the past few months. But it’s especially difficult when that place looms over you. When the Trail Conference announced that its trail stewards would return in late June, I calculated that, ethically and legally, July would be a good time to make my return.

I passed the barren months reading The Living Mountain, a slim and luminous volume by Nan Shepherd about the Cairngorm Mountains of Northeast Scotland. Shepherd’s Highlands are much like our own, in that they were near her house and she could walk into them at a moment’s notice. However, in height, character and temperament, they reminded me more of New Hampshire’s White Mountains: Rocky, exposed and inviting to particularly nasty and deadly spats of weather. 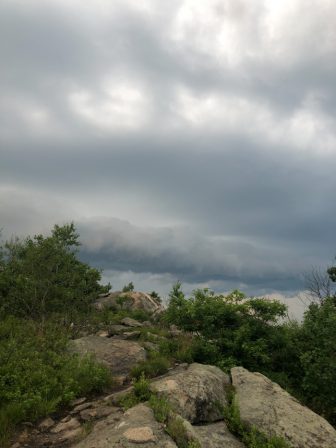 In for a “gully washer” on Mount Beacon

And still Shepherd loved them, returning throughout the years, always amazed. There’s no plot to her book; it’s best described as “Nan goes for a walk and looks around; decades pass.” She wanted to know everything there was to know about the mountains and was happy to fall short. “This process has taken many years, and is not yet complete,” she wrote. “Knowing another is endless.”

But she also wrote: “I believe that I now understand in some small measure why the Buddhist goes on pilgrimage to a mountain. The journey is itself part of the technique by which the god is sought.”

As I returned to the city’s beloved namesake in the rain, I thought about how my experience on the mountain has changed during my 13 years of going up and down it — based on weather, time of year, who I was with, and the person I was. It changes your perception of time when you mark the months by red newts, mountain laurel, blueberries, leaves falling, the first ice at the summit and the water level in the reservoir (currently surprisingly high compared to the severe drought several years ago that revealed the fuzzy backseat of a station wagon that someone later pulled to the shore).

I was happy to see on my recent return that a resourceful soul or group had found the “desire line” I spent all summer last year pounding into the tall grass between the end of the Hiddenbrooke Trail and Mountain Road and transformed it into an actual trail. On the other hand — and maybe it’s because I have been running only on flat ground for months — I’m upset with whoever decided to make the first two switchbacks on the mountain even steeper, because I don’t remember my legs hurting that much.

For the first time since COVID, I returned home encrusted with dirt. It took two days for my clothes to dry. A newt bit my toe. And next week I’ll return.

2 thoughts on “Out There: Return to Mount Beacon”