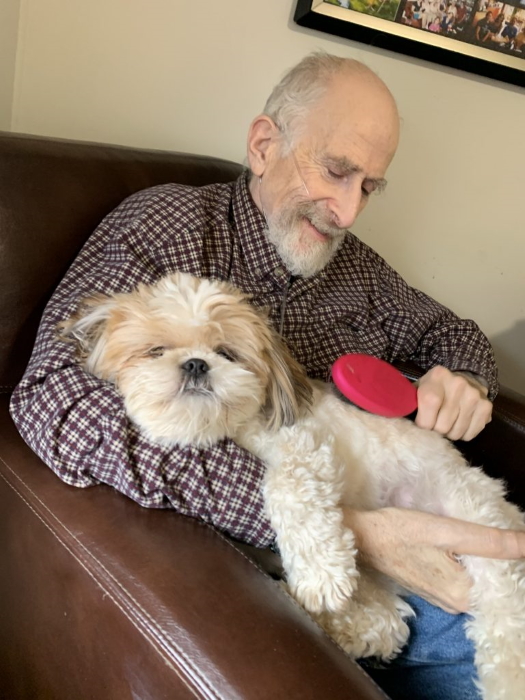 Stanley Lindwasser, 73, died May 3 at his home of pulmonary fibrosis, with his wife and children nearby. The artist had lived in Beacon since 2016 and had his last solo show in the city in 2019.

Stan was born Feb. 17, 1947, in Brooklyn, and lived in Hoboken, New Jersey, before moving to the Hudson Valley with his wife, Helen Crohn.

Stan was a painter for more than 50 years, working with acrylics on canvases large and small that evoked landscapes, sky, water, rocks, and mountains. Along with Beacon, he had solo shows in Manhattan and Hoboken. He produced his final works in April.

In an interview with The Current in 2018, Stan said he knew from an early age what he wanted to do with himself: “I was told in kindergarten I was gifted in finger paints!” He said he benefited from an inspiring high school art teacher. Before his senior year, his family moved to Manhattan; he later earned his bachelor’s degree and a master in fine arts from Hunter College.

His first works were installations. He painted on cord, then strung the cord on frames, forming three-dimensional grids. One was exhibited in the courtyard of the Brooklyn Museum and others at the Brooklyn Public Library and the Bertha Urdang Gallery in Manhattan.

I question the place and role of color: on lines, as lines, or replacing lines. The works I have been doing reflect my career long interest in the details of line and color, the creation of shapes and the placement of these on paper, or in space. These paintings reflect my thinking about direction and how changes in density of paint or use of water define and subtly change the composition.

As the paint flows, it changes directions. Paint flow into lines of denser color. Areas formed are not defined by enclosed lines; rather they indicate new colors. The paintings may suggest by chance, landscapes, mountains, rocks and whatever the viewer sees.

In addition to his wife, he is survived by three children and three grandchildren.