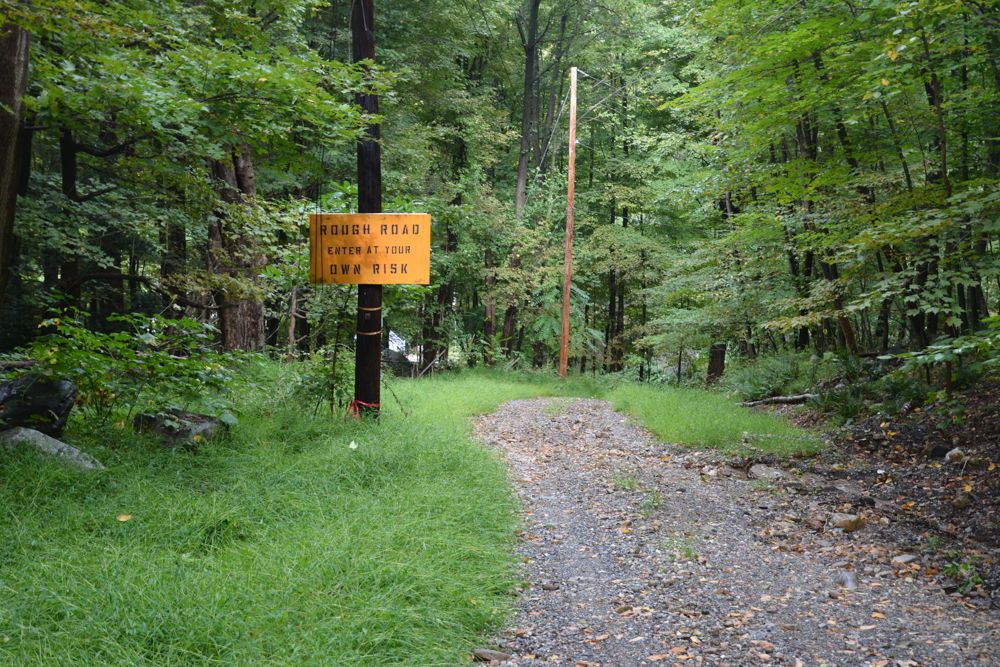 A sign on Upland Drive warns drivers to use caution (Photo by L.S. Armstrong)

At opposite ends of town, different requests of board

In Continental Village, at the southern tip of Philipstown, residents want the Town Board to step up and take control of a deteriorating private lane.

At the northern edge of town, residents want the board to back off and cancel plans to pave a half-mile dirt stretch of a mountain road.

Residents from both locales attended a July 9 Town Board meeting, held via Zoom, but the board took no action on either issue.

In June, the board proposed a six-month moratorium on development around hillside Upland Drive in Continental Village, which at some points resembles a rocky cow path. It connects Old Albany Post Road and Winston Lane.

According to the draft law, the moratorium would apply to Upland, the dead-end Cliffside Court and Ridge Road off Aqueduct Road, about a mile away. The ban, which would exempt repairs to existing structures, states that further construction would pose “potential adverse impacts to the environment.”

Supervisor Richard Shea blamed the proposal on Putnam County, which he said has made clear it plans to sell parcels in the area acquired in tax foreclosures.

More development there “is not going to be helpful to any of the residents,” he said. The roads named in the moratorium are substandard, with grades that sometimes exceed what is allowable under the code, he observed.

Shea said the town board needs time to consider zoning changes “before we get slammed with a lot of development.”

Councilor Mike Leonard noted that some of the roads, particularly Upland, are dangerous. “I don’t think they should even be open [to vehicles], especially at night,” he said.

Residents who attended the meeting backed the moratorium.

“I just can’t imagine this road could handle any more building and traffic,” said Maria Natiello, while Nancy Lovell noted Upland’s blind curves and that “torrential downpours eat away whatever portion of the road remains dirt.” Justin Herminghouse, an ambulance corps member, recalled “instances where we have had trouble getting emergency vehicles” up Upland.

Residents also expressed concern about well-water supplies if new houses are built, with Shea noting that “Continental Village is a tough spot for groundwater already.”

Some residents suggested the town take over Upland, but Shea cautioned that converting a private road “is a fairly long process.” A majority of residents must petition the town and take responsibility for a bond for repairs over several years; only when the bond is paid off can the town claim the road, he explained.

The lower stretch of East Mountain Road South is paved, but the pavement ends before it joins East Mountain Road North. The town plans to continue the paving, but residents from that area of town who attended the July 9 meeting objected.

Councilor John Van Tassel reminded them that the Town Board approved the work several years ago but paving of the half-mile stretch had been delayed.

Roy Rosenstein, who joined the Zoom meeting from Prague, where it was about 3 a.m., said residents are “concerned about the progressive paving of the mountain, which many of us do not want.” He and others asserted that paving promotes speeding. “We don’t want to see our country road turned into a speedway to Dutchess County or an altered throughway to Route 9,” he said.

Vit Horejs said that, setting aside “the romantic preservation of rural character,” the dirt surface has potholes, which he called “natural speed bumps. I will praise those potholes.” He suggested that Philipstown might use money earmarked for paving to instead install speed bumps around town.

Shea said board members would discuss the plan further with residents before acting. “I understand the will of the people,” he said. “If we’re compelled” by sufficient opposition to paving, “we’ll take another look at it.”