On a Wednesday afternoon, a messenger of the National Bank of Fishkill standing on the porch of Baxter’s Hardware Store at Main and Rock streets while he waited for the 12:55 train, was robbed of $8,000 [about $150,000 today] by a stranger in a blue flannel suit who threw red pepper in his face. Five minutes later, Elijah Jones, a native of Germany and coachman to H.H. Munsell, was mortally wounded when the fleeing robber fired a Remington five-shooter as he fled along Stone Street. The Cold Spring Recorder congratulated village residents for not lynching the suspect. [Update: The Recorder identified Jones as a native of Germany, but this was corrected on an obelisk erected at Fishkill Rural Cemetery that reads: “Elijah Jones, a native of Poland, died by the hand of an assassin at Cold Spring, July 29, 1870, age 40 years. Erected by the National Bank of Fishkill and Fishkill Savings Institute as a tribute of respect for one who lost his life arresting a desperado who had robbed their messenger.”]

Samuel Reed, a former member of the Engineer Corps at West Point and a veteran of the Mexican War, was found drowned after apparently falling into the Hudson. By way of tribute, The Recorder noted that “he worked occasionally at shoemaking but only sufficiently to keep himself in funds for drink.”

The coroner was notified that a stillborn infant had been found among the weeds by the fence at the village cemetery. 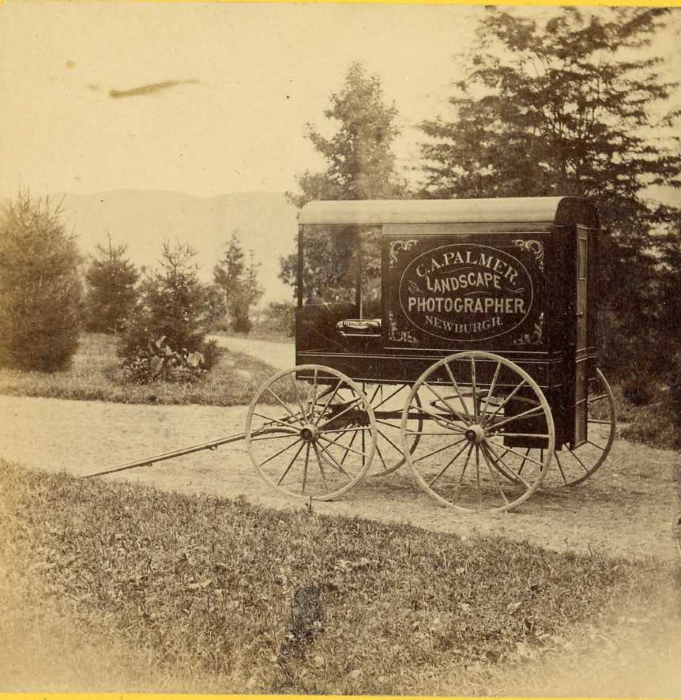 C.A. Palmer, a Newburgh photographer whose wagon is shown here, sold his stereoscopic images in Philipstown.

A boy named John Fury was holding gunpowder when it ignited, burning his hand and singeing his eyebrows and hair.

John Bates returned to the village after spending nine years in New Zealand.

John Maher was sentenced to 60 days in the county jail for striking his wife.

Despite a strong wind, a stovepipe fire at the Longfield House on Market Street was extinguished on the first alarm.

The editor of The Recorder wrote: “We wish to reiterate our position that the editor of a paper that has contracted to furnish several hundred people with the local news for $2 per year is ‘minding his own business’ when he endeavors to fulfill that contract.”

A silver pocket watch belonging to Timothy Casserly, who was paving the south gutter of Main Street near the corner of Kemble Avenue, went missing after he hung his vest on a fence. Two teenage strangers who had been spotted nearby were tracked to Fishkill Landing but did not have the watch. Nevertheless, the teens were returned to the village and jailed for five days for “examination.”

O.M. Baxter had the unpleasant task of shoveling his load of coal twice after a rear wheel on his wagon broke while his team pulled it up Vinegar Hill.

John Sloan was arrested for threatening the life of Uriah Furguson but the case was settled when the Jehu [coachman] agreed to leave town.

A tramp who asked for lodging and food from the Overseers of the Poor for Philipstown was found to have $80 in his pockets.

The Brooklyn Eagle shared a bicycle run to Newburgh that noted that, once reaching Garrison, “follow the turnpike, and when three-and-one-half miles out take the right fork of the road to Nelsonville, the road being fair, although rather hilly. Take left fork at Nelsonville direct over the Highlands to Fishkill village. It is a good road, but the hills are the worst the wheelman encounters on the trip.” 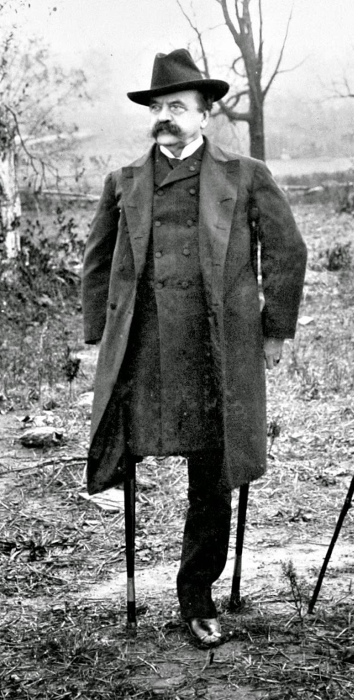 Gen. and Mrs. Butterfield entertained Gen. Daniel Sickles at their Cold Spring estate, Cragside [now the Haldane campus. Sickles was notorious for killing his wife’s lover in 1859 in broad daylight across the street from the White House. He pleaded temporary insanity and was acquitted. During the Civil War, he was wounded at Gettysburg and had his leg amputated. When he visited Cold Spring in 1895, he had most recently been a member of the U.S. House.]

Ada Barker, 11, a “colored domestic,” was found dead in his bed at the home of the Rev. A. Coons, rector of the South Highlands Methodist Episcopal Church. A citizen jury ruled that the death was caused by “acute inflammation of the bowels.”

A traveler known as “The Strange Young Man” who passed through Cold Spring on his journey from Mexico to Jerusalem arrived in the village on his return trip and pitched a tent in the lot next to Post’s confectionary store.

The Cold Spring Village Improvement Association moved the bandstand to a lot at the corner of Main and Furnace streets.

Harry Allchin said he planned to make ice cream on Saturdays and Sundays and that orders could be placed at the Garrison Hotel.

Burglars broke into the home of Judge William Wood and stole a silver teapot, as well as the home of Mrs. Thomas Coe, where they took the Sunday dinner she had prepared.

A jury ruled for the siblings of John H. Iselin of Garrison, a family of bankers, who argued he was incompetent to handle his finances on account of an overindulgence in liquor and drugs. Days later, Iselin, who was a trustee of the Garrison School and a vestry member at St. Philip’s Church, died of gastritis.

The Rev. F.W. Overhiser, a former pastor of the Baptist Church, was granted a patent for a ribbon mechanism for type-writing machines.

A storm brought down 12 telegraph poles between Cold Spring and Garrison. 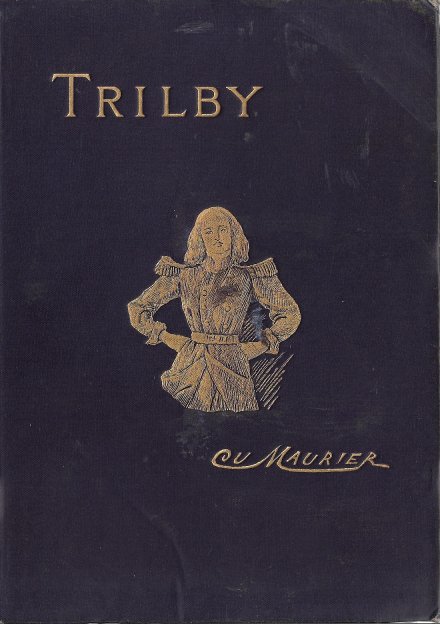 Trilby, a novel by George du Maurier, was a sensation in 1895.

William Dalzell named his cat Trilby in response to the “Trilby craze” — a novel by George du Maurier called Trilby that was a sensation in the U.S. and U.K. Its protagonist is Trilby O’Ferrall, an artist’s model in Paris who falls under the spell of a Svengali who turns her into a star singer through hypnosis.

A northbound New York Central train struck a man near Anthony’s Nose with such force that he was thrown into the river. The train crew retrieved the body, placed it aboard and brought it to the coroner in Cold Spring.

Dr. Clark of Cold Spring was summoned to the home of Maud Howlette of Storm King, who accidentally shot herself in the chest. She said she was out walking when she spotted five men picking up wood near the railroad tracks. She pulled her Savage 32 from her pocket to make sure it was loaded, and it discharged. The Poughkeepsie Eagle-News noted the accident was a surprise because Mrs. Howlette was “one of the best revolver shots” in that part of Orange County.

A children’s dress factory began operations in the former Rite-Form Corset factory space at Depot Plaza leased from Guiseppe Giachinta. It is expected to employ between 50 and 75 operators.

Principal William Hageny of Haldane Central School announced its playground would be open weekdays from 9 a.m. until noon under the supervision of Clara Malone, a student at the College of New Rochelle.

Pvt. 1st Class Joseph Delaney of Parsonage Street returned to the U.S. after spending 24 months overseas as a crew member of an air transport plane.

Pvt. 1st Class Antonio Giachinta of Cold Spring, serving with a detachment of the 8th Tank Battalion, was awarded the Bronze Star. During an attack in Germany, the medic drove under heavy fire to the head of the column and returned with seven badly injured men. Although his vehicle was severely damaged by gunfire during the rescue, he repaired it on the spot and continued evacuating wounded.

Thirty-seven “overage” ordnance soldiers, including Corp. William Austin of Parsonage Street, were honored at a ceremony in Europe for declining to return to the U.S. in 1943 when they reached the discharge age of 38.

The Putnam County Historical Society on Chestnut Street opened an exhibit of the summer wardrobe that a lady of fashion would have worn in the 1870s. It was part of a collection donated by Marguerite Walker Rogers that included European gowns, petticoats, shawls, bustles, hoop skirts, slippers, silk mitts and beaded bags.

Construction was completed on the new firehouse at North Highland Road.

Garrison school district voters passed a $575,000 contingency budget, 147-112, after voting down the budget presented in May.

John Dietrich, who lived at 12 Secor St., died at age 89. He moved to Cold Spring in 1930 to open his own electrical contracting business, retiring at age 82. During World War II, he worked on the construction of the Pentagon.

Mary and Mike Scalpi of Beacon purchased the Riverview restaurant. Mike had worked at the Old Whitestone in Beacon as a teenager and, after a stint in the Army, returned to become its head chef.

Adrian Haar complained in a letter to the editor that three U.S. flags had been stolen from outside his insurance agency over the previous six months. In two cases, the thieves also took the poles.

With Metro-North workers expected to strike, Philipstown riders were instructed to drive to the Dutchess Mall near Interstate 84 for bus service to Manhattan. The railroad said it would provide 15 buses to take up to 540 passengers.

Haldane named Larry Brigati as varsity football coach. He dismissed rumors that there would not be enough players to field a team in the fall.

After a 30-minute search, Putnam County sheriff deputies located Elizabeth Mori, 3, who had wandered into the woods near her Garrison home.

The Hudson Valley Hospital in Peekskill announced it would establish a paramedic training center at Butterfield Hospital.

Roosevelt Basso died. He was remembered for throwing a school-record 20 strikeouts in a Haldane baseball game in the early 1950s.