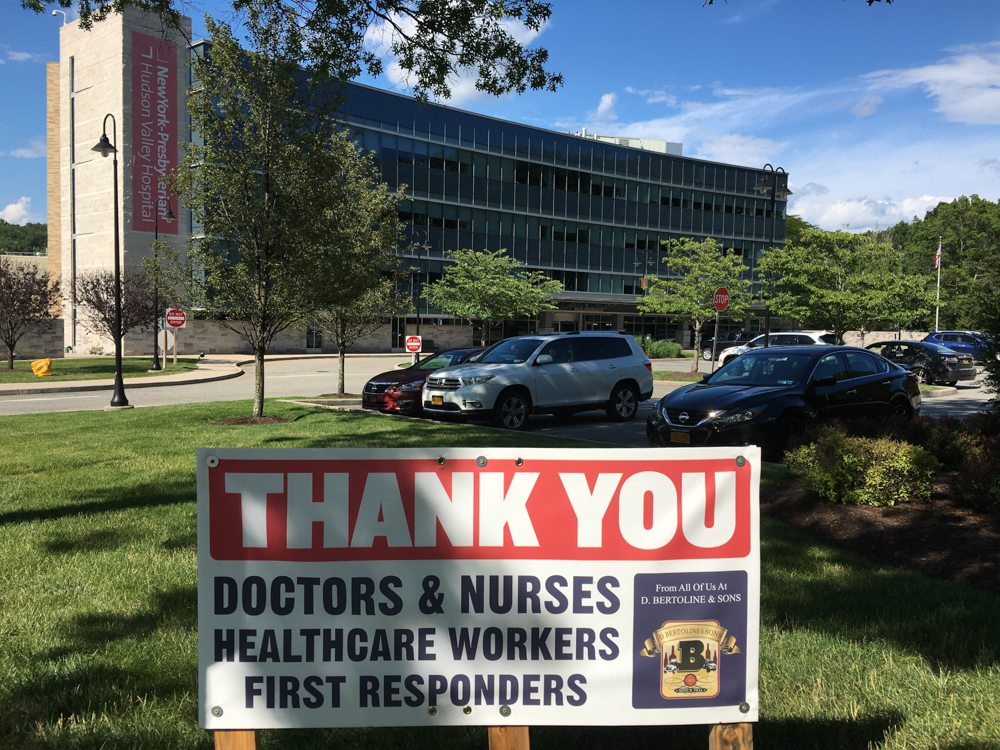 A sign outside NewYork-Presbyterian/Hudson Valley Hospital offered thanks to its workers. (Photo by L. Sparks)

Nadia Amin will never forget her experience tending to COVID-19 patients at NewYork-Presbyterian/Hudson Valley Hospital as infections and deaths soared in March and April.

A primary-care doctor, she volunteered to treat emergency-room arrivals and inpatients in frenzied 12-hour shifts at the Cortlandt Manor facility. There was a shortage of beds and a triage to determine who needed to be hospitalized and who could be sent to isolate at home.

She watched patients “crashing” without being able to help and returned to her basement between shifts, where she slept to avoid contact with her family.

“It’s not an experience that I’d ever want to relive,” Amin said. “You saw things that you generally don’t want to see.”

Three months ago, New York and its hospitals were at the epicenter of a global pandemic. On April 12 — 45 days after New York’s first confirmed case of the virus — 18,825 people were hospitalized, including 1,851 in the Mid-Hudson Region, which includes Dutchess and Putnam counties.

That same day, 5,156 people statewide and 559 in the Mid-Hudson were struggling to survive in intensive-care units.

“I’ve been through the H1N1 [swine] flu epidemic,” said Amin. “This is unprecedented.”

Now, more than 100 days after that low point, the situation is dramatically better.

On Thursday (July 23), 706 people statewide were hospitalized with COVID-19 (including six in Dutchess County and none in Putnam) — the lowest total since March 18 — and hospitals had resumed elective procedures and surgeries. Doctors such as Amin who volunteered for COVID duty have returned to their day jobs and family members once again can visit patients.

For the hospitals, however, what has emerged from the rubble is a new normal: testing every new patient for COVID-19 and screening visitors for symptoms; continued mask and social-distancing rules; monitoring mask and gown supplies for staff; planning for a potential surge of infections; and combating fears some people may have about even going to the hospital.

At the same time, hospital executives are pushing for federal funds to balance the loss of revenues and rising expenses.

“Suffice to say, there was nothing normal about our operations beginning on or about March 6,” said Kerry Eaton, the chief operating officer for Nuvance Health, whose system includes Northern Dutchess Hospital in Rhinebeck, Putnam Hospital Center in Carmel and Vassar Brothers Medical Center in Poughkeepsie.

“Although the peak is behind us, business is not back to normal, and we foresee that the way we provided care in the past will be altered going forward for a long period of time, perhaps permanently,” she said.

A surge in patients

On March 23, Gov. Andrew Cuomo ordered hospitals to increase their capacity by a minimum of 50 percent. Under one projection, Cuomo said at the time, the state could need 110,000 hospital beds, including 37,000 ICU beds with ventilators.

On the front lines, fatigued doctors and nurses pushed past long hours and a lack of treatments to save as many patients as they could. Administrators reallocated personnel and supplies, created ICU beds in operating rooms and consulted with patients online.

As the infections and hospitalizations accelerated, NewYork-Presbyterian/Hudson Valley Hospital quadrupled its critical-care beds, said Stacey Petrower, the hospital’s president, and still, “every one of those beds was occupied.”

“There were days where we didn’t have beds to move patients into the hospital,” said Amin.

By April 11, Vassar Brothers had 150 confirmed and suspected COVID-19 patients, including 40 on respirators. In addition to its 20 ICU beds, the hospital converted other areas into ICUs, including its pediatric unit, cancer center and its unit for post-surgical patients, Begg said.

MidHudson Regional Hospital in Poughkeepsie, which is part of the Westchester Medical Center Health Network, increased its ICU and “medical-surge” beds by 50 percent, said Anthony Costello, the senior vice president for professional support services at WMC. Fortunately, he said, that was enough.

Local hospitals spent money creating and equipping new units; buying personal protective equipment for doctors, nurses and staff; and covering overtime. The biggest financial hit occurred between March 25 and April 29, when hospitals in Dutchess and Putnam had to forgo elective surgeries and procedures under an order issued by Cuomo.

The lost revenue from those canceled procedures had “an enormous impact” on the Nuvance system and continues to lag compared to the months before COVID, Eaton said.

The impact on the books at MidHudson Regional is still being evaluated, Costello said. But operating procedures are up 40 percent over the months before COVID, and the number of patients is higher than this time last year.

“You would have thought it was through the backlog for the first month, but it’s continuing,” he said.

Money was set aside in the package to reimburse “hot spot” hospitals for costs and lost revenues. Overall, hospitals in New York state received $5 billion in April and $680 million this month.

The day before the funding was announced, Schumer visited Putnam Hospital Center, where he called on the U.S. Department of Health and Human Services to release more CARES Act funding.

Only select entrances at Hudson Valley Hospital are in use and inpatients are allowed one visitor at a time. Visitors must be at least 18 years old and have their temperature taken and be screened for symptoms. Appointments are spaced out to reduce crowding and wait times.

Nuvance’s hospitals and MidHudson Regional have also resumed visitations, with a one-person limit, and every hospital continues to provide COVID-19 testing.

Keeping patients and visitors safe is not the only challenge.

Despite the precaution, many people who postponed or delayed non-emergency procedures are wary of using hospitals. At Nuvance, some patients suffered complications — to the point of risking emergency surgery — because they delayed seeking care, Eaton said.

Light in the darkness

Over the last four months, medical personnel and staff at area hospitals were treated like heroes.

The Dutchess and Putnam governments delivered masks and other supplies. Organizations and restaurants delivered meals. Schoolchildren created artwork honoring their efforts. Actors such as Matt Damon and Jennifer Lopez recorded video tributes for the staff at NewYork-Presbyterian. Signs expressing gratitude are planted along a grass expanse fronting the entrance.

The pandemic has “been life-changing for everybody in our area,” said Begg.

“We pulled together as a team and we developed relationships that we’ll have forever,” he said. “It’s not quite the same, but it’s similar to fighting a war.”

Much attention has focused on the more than 25,000 confirmed COVID-19 deaths reported by the state. But at the same time, nearly 72,400 patients had been treated, recovered and been discharged as of Tuesday (July 21).

Begg, when asked to name something that stood out during the crush of patients, recalled those who went home after being hospitalized for weeks, and sometimes more than a month, without seeing their family.

“Seeing those reunions was emotional,” he said. “It gave you a reason to get up and go to work every day.”

One thought on “Local Hospitals in Recovery Mode”