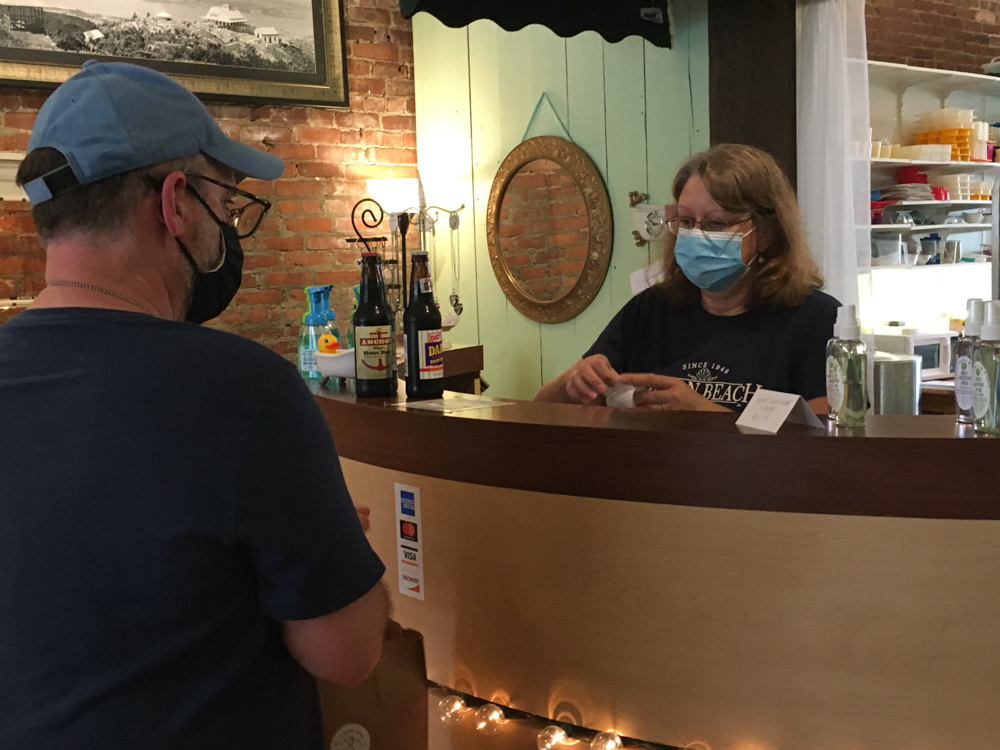 Susan Early emerged from the rear of her C&E Paint Supply store on Main Street in Cold Spring one day last week to find a maskless man browsing.

She reminded him of a New York mandate that masks must be worn and offered him one from a supply she keeps on hand. His response, said Early: “It’s not the law yet.”

Early had her own response: “We’re not having this conversation. You have to put one on or leave.” He put one on, she said.

In New York State, under an executive order issued by Gov. Andrew Cuomo on April 15, anyone over age 2 is required to wear a mask or face covering in public and where social distancing — at least six feet of separation — cannot be maintained. Violators can be fined up to $1,000.

Employers are also required to provide masks to workers, who must have their faces covered when interacting with the public. Under an order issued by Cuomo on April 28, business owners can refuse entry or service to anyone not wearing a face covering.

The only people exempted from the requirement are people with “a medical or other health condition that prevents such usage,” according to the state Department of Health.

Nationwide, “you have to wear a mask” have become fighting words for some people. As the pandemic grinds on, videos of unmasked scofflaws have proliferated, with cell phones recording confrontations that include attacks on store employees, fights between customers and the brandishing of firearms and knives.

Those kinds of incidents have been largely absent in the Highlands, where store owners report that customers almost always wear masks or, if asked, return to their cars to retrieve one. Like Early, many shop owners also have a supply.

Barbara Fisher, who owns Barb’s Butchery in Beacon, said only two customers have entered her shop without their faces covered. One retrieved a mask from his car. The other “said something to my staff and stormed out,” she said.

“I don’t understand the fight about the mask,” Fisher said. “It just seems like a simple, scientific, easy solution to this. It’s baffling to me as to how it’s turned into this nonsense.”

Elsewhere in the U.S., the nonsense has included:

“Don’t help them and don’t service them,” she said. “If they make a scene, call the police and call me next.”

On July 14, the federal Centers for Disease Control and Prevention credited masks with preventing the spread of COVID-19 to customers seen by two infected hairstylists at a salon in Missouri. Both stylists were exhibiting symptoms of the virus but were wearing masks under a local law requiring them. No illness was found in 139 clients or secondary contacts, according to the CDC.

Over the last two months, New York has slowly allowed businesses to reopen, bringing people together in workplaces, stores, cultural sites and other places. The risks of reopening, and the continued importance of masks, are highlighted by health advisories that Dutchess and Putnam counties issued in July warning people that they may have been exposed to COVID-19 at local businesses.

Dutchess is tracing people who visited the Ashley HomeStore in Poughkeepsie from July 11 to 15 because an employee tested positive for COVID-19. Putnam issued three advisories: for the Tops Friendly Markets and Salsa Fresca, both in Carmel; and Tom & Jerry’s Bar & Grill in Brewster.

The state is also cracking down on bars and restaurants with liquor licenses that don’t enforce mask wearing or social distancing. As of July 29, the state liquor authority had suspended the licenses of 57 establishments, 43 of them in New York City and on Long Island, with five receiving fines ranging from $5,000 to $35,000.

No businesses in Putnam or Dutchess counties have had a license suspended, but the Publick House in Pleasant Valley was charged in May with failing to comply with the state’s shutdown guidelines.

Noah Katz, the owner of Foodtown in Cold Spring, said “everyone is cooperating” with the mask requirement at his grocery store. People who forget a mask are given one for free, he said. Foodtown also sells masks for $1 each, with the proceeds donated to charity.

At Beacon Bath and Bubble on Main Street, in both display windows mannequins lounge in bathtubs filled with faux bubbles. Each one has a face covering.

“It’s not that big of a deal to put on a mask,” said owner Brenda Murnane.