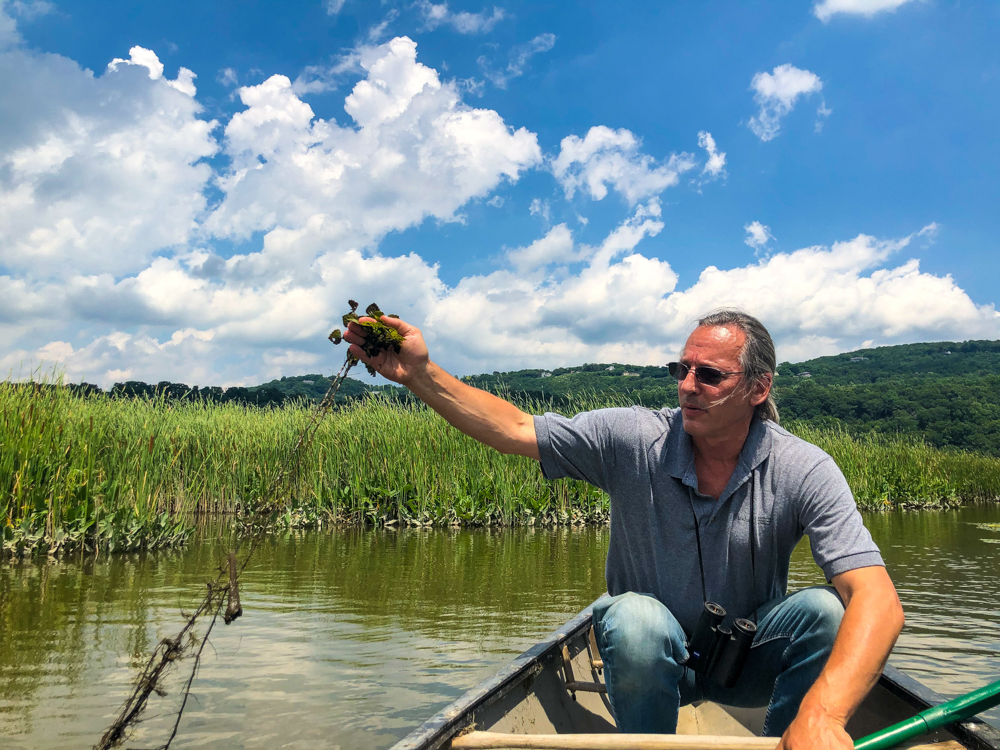 Scott Silver pulls a water chestnut vine from the waters of Constitution Marsh. (Photos by B. Cronin)

The channels of Constitution Marsh were eerily quiet one afternoon last week as the heat index inched toward 100 degrees. No bird calls or frog peeps, just the gentle swish of the canoe as Scott Silver and I paddled through corridors lined with cattails. The bald eagles, ospreys, great blue herons and kingfishers watched us silently from the shade of distant trees.

“We’re the only ones dumb enough to be out here,” said Silver, director of the Audubon Center and Sanctuary, which oversees the marsh.

As we steered around a corner into one of the slower-moving channels, the water was clogged with throngs of intricate green rosettes. They were beautiful, and it was that beauty that inspired a gardener at Harvard in the mid-1870s to pick some from the university’s botanical garden (where, at the time, they were the only such plants in the U.S.) and toss them into Cambridge waterways. 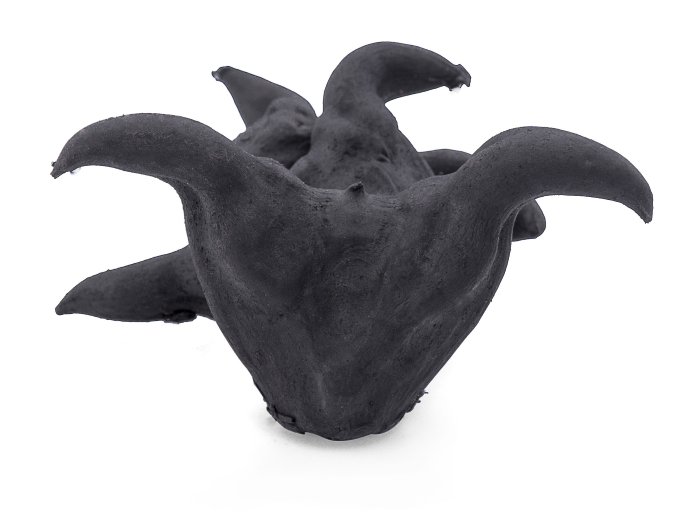 This caused some local cries of alarm, although botanist George Davenport dismissed any concerns. “That so fine a plant as this, with its handsome leafy rosettes, can ever become a ‘nuisance,’ I can scarcely believe,” he wrote.

One hundred and 50 years later, any Hudson River swimmer who has stepped on one of their devilishly spiky seed pods might be inclined to disagree.

The water chestnut (Trapa natans) should not be confused with the water chestnut (Eleocharis dulcis) that is a mainstay of Chinese food. Trapa natans hails from Europe, where insects that feed on the plant keep it in check. Because those bugs don’t exist in U.S., it wasn’t long before the plants spread to waterways all along the Northeast. The prickly pods even stuck to birds, who carried them to freshwater sites, such as the Finger Lakes.

Between July and mid-August, anywhere the current slows, the plants bloom and choke waterways. Silver said kayakers have told him they avoid Constitution Marsh after July 4 because the channels become so clogged. It’s easy to see why: As we pass through the patch, Silver and I begin to resemble gondoliers.

The beguiling rosettes conceal a surprising amount of biomass; it took Silver several minutes to wrestle one plant out of the water with both hands. When the plants die in August, killed by a salt front that moves up the river, they sink, forming a giant clump of vegetation that smothers everything that’s living. Unless they are swept to shore, the plant’s spiky seed pods also sink to the marsh bed, where they can survive for as long as 12 years, patiently waiting for their chance to bloom again.

“People think that because we’re the Audubon Center, we only care about birds,” Silver said. “But if we want to boost bird populations, we need to care about fish.” 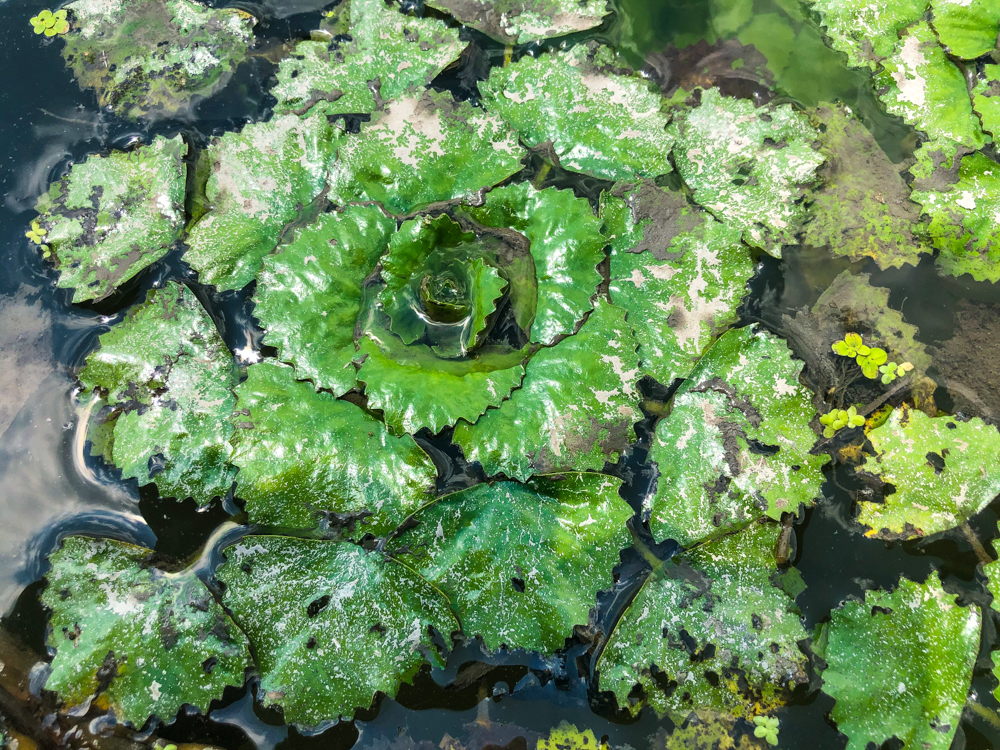 A water chestnut rosette (Photo by B. Cronin)

This year’s crop of water chestnuts isn’t as thick as last year’s, which Silver thinks may be because we had a cooler spring. The bad news is that the problem will only become worse as the climate heats up in years to come.

Researchers are trying to identify a safe biological control that can be used to beat back the chestnuts, Silver said. In the meantime, the only thing that can be done is to scoop up the plants before their seed pods form. That is a daunting prospect if done by hand, but a modified flatboat could do the job quicker. Unfortunately, it would cost $70,000, an expense that Silver suggested could be shared by the overseers of other waterways, such as Foundry Cove and Wappingers Creek.

“It’s hard to get things funded when you’re not solving the problem,” he said. “That’s why I don’t bother spending a week trying to pull all this stuff up by hand.”

Silver paused mid-paddle, looking across the marsh. “Although I might end up doing that.”