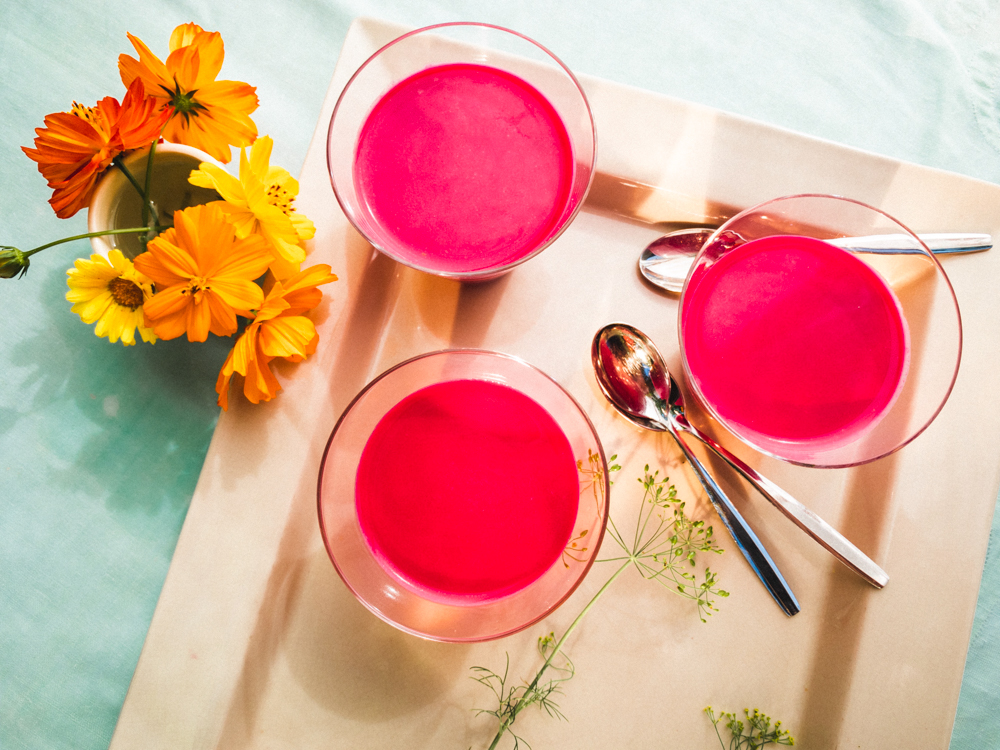 I feel as if I’m going backward whenever I make this soup. I think, “Hang on, C — didn’t you spend five decades running away from pickled beets?” My childhood encounters with canned, pickled beets had placed this root squarely in the vegetables-I-abhor camp, an aversion I didn’t manage to overcome until I tasted roasted beets at a Manhattan bistro in my late 20s. So how did I allow vinegar, sugar and spices to sneak back into my beet repertoire?

In my defense, I offer this: I had no choice. There comes a point every summer when a body craves foods that are not merely cool, but vibrantly, scalp-achingly chilly. Tart lemonade instead of chocolate milk. Sweet-spicy-aromatic Vietnamese salads in place of American coleslaw. Middle Eastern concoctions laced with bitter and sour notes in place of cold, mayonnaise-y pasta. And this dazzlingly tangy beet soup. At the onset of summer’s first heatwave, it suddenly feels like the best possible way to consume beets.

As it happens, beets and vinegar are natural companions. That’s because beets contain a flavor molecule called geosmin, which gives them their earthy aroma. (Here’s a curious fact: geosmin is also found in certain bottom-feeding freshwater fish and accounts for the creatures’ “muddy” flavor). It isn’t generated by the dirt beets grow in but rather is manufactured by the plant itself — evidently some kind of vegetal when-in-Rome behavior. Vinegar neutralizes this compound, allowing beets’ sweet, rich and almost orangey fruitiness to shine through. For this soup, coriander, cloves and bay leaf add floral, spicy and eucalyptus notes to the mix, and chili flakes give it a fiery kick.

This soup shares a trait with many of my favorite dishes. It’s a quality known in the business and marketing worlds as “stickiness,” which has nothing to do with the way your T-shirt feels against your back after you walk through a parking lot, but rather a product’s ability to lodge itself in memory, and stay there.

So sticky is this recipe that for the past several years, it has been the first — and only — thing that comes to mind when I encounter fresh beets in high summer.

For me, this soup also represents another kind of look backward. It’s a dish I used to serve at the start of summer dinner parties. I love offering a simple, pureed soup at the beginning of a celebratory meal. I used to serve it in little tea cups or glasses, passed around on trays like some kind of fancy cocktail. Those parties are now a hazy memory, but, armed with a glass of this cold soup, I am ready to boldly go forward into August.

This recipe was inspired by David Tanis’s Cold Pink Borscht in a Glass, which in turn was inspired by the borscht from the legendary Barney Greengrass Deli on the Upper West Side of Manhattan. I use ice in Step 2, in place of additional boiling liquid to make the blending and cooling go more quickly. If you don’t use ice, add 4 more cups of water to the pot.

Trim and peel the beets, and cut into rough quarters. Place cut beets in large saucepan. Add enough water to cover, along with all the remaining ingredients, except for the ice. Bring to a boil, reduce to a simmer, and cook until the beets are tender but not falling apart, about 15 to 20 minutes.

Transfer soup in batches to a blender, taking care not to fill pitcher more than 1/3 full or the hot soup will splash out the top. Puree on highest setting until very smooth. Pass through a sieve into a bowl, then stir in ice cubes until melted. Taste and correct the seasoning, adding more vinegar, salt, and/or sugar to give it a nice kick. Refrigerate until ready to serve.

Just before serving, whisk the yogurt into the soup, or serve it dolloped on top.