Officer Mike Confield is vice president of the Beacon Patrolmen’s Benevolent Association, the union that represents the city’s law-enforcement officers. 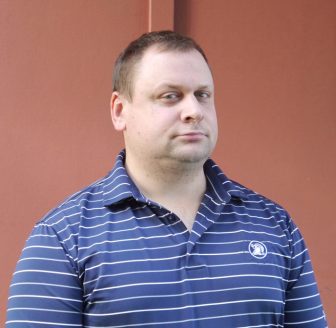 Has it been challenging for officers to be assigned to protests or other events they may perceive as anti-police?

We don’t have an issue blocking off the streets and allowing people to protest for any reason. If we did, we wouldn’t be doing our jobs. Part of wearing a badge is to allow people to express their First Amendment rights. A lot of the marchers, regardless of their cause, thank us for being there.

How is morale in the Beacon Police Department?

It’s fairly low, not necessarily because of what’s happening in Beacon, but the perception of police across the country. There are a lot of young guys in the department, and during their first few years they’ve experienced a lot of negativity toward the profession. That’s tough for someone who’s 21 or 22 years old.

Do you believe the Black Lives Matter movement is anti-police?

No. I believe it started as a movement for equality and against police brutality, which we’re all against. I do believe there is a small group, around the country and locally, that uses the Black Lives Matter movement to push an anti-police agenda, and that takes away from the actual message.

Is there a need for police reform in Beacon?

There’s always room for improvement and if there’s something that makes us more effective, we’re all for it. But we want to be part of the conversation. We don’t want to see change for the sake of change just to appease a crowd. In Beacon, we’re an accredited agency, which is not easy. I don’t personally see the problems that are being discussed [as existing] in our department, but if there’s something like bias training or understanding how to deal with an emotionally disturbed person that can help us do our jobs better, we’re all ears.

The PBA and mayor’s office issued a statement two weeks ago seemingly declaring a truce. Are you guys good?

There was a lot of miscommunication. We felt alone, like no one was standing up for us. The mayor and I agreed that even if we don’t agree on everything, we’ll keep the lines of communication open.

What would you like to see in the city’s next chief?

A qualified, experienced leader who looks out for the community and employees. We encourage public input, but there are guidelines on who the city can hire. We don’t want people to think we’re picking who we want, because that’s not the case. He or she will have to be qualified to be appointed to the position.

Are there misconceptions about the police?

I hear a lot that people believe the police are more against the community than for it, which couldn’t be further from the truth. We have a good group of men and women here who care about what they do. We’re here for the community and we take pride in how we’ve helped the city grow. I remember when the east end of Main Street was boarded up, and now the city is flourishing. We don’t want to ruin that; we want to keep the city growing.

What’s your take on calls to “defund the police?”

There are different versions of it — one where people want to find money that could be allocated other places and then there are calls to completely defund the police, like you don’t need them. I’m never going to say that we don’t need more resources to do our jobs. And taking away all the money from the department would be outrageous. That would destroy what we’ve accomplished here.

One thought on “Q&A: Mike Confield”