There’s something going on in Sascha Mallon’s attic in Beacon: things being moved about, hammering noises and the occasional sound of something shattering.

Too scared to investigate? Don’t be. It’s “just” an installation, although just is relative when considering a work-in-progress that already has more than 400 parts. 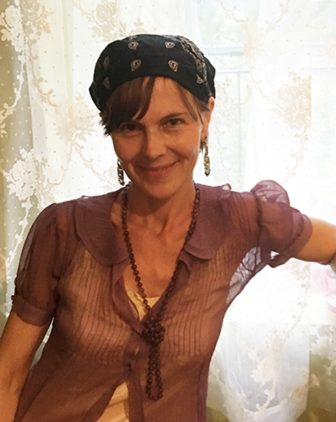 Mallon, a native of Austria who studied art therapy there, is an artist-in-residence (albeit her own residence, at the moment, because of the pandemic) for the oncology and hematology, and the bone marrow transplant programs at Mount Sinai Hospital in Manhattan.

Her attic installation began as a “meditation on dying, a way for me to meditate in a peaceful way,” she says. “It became specific to people, events, like the Connecticut school shooting [in Newtown in 2012] and the deaths of my patients.”

She prefers drawing but switched to clay to make her images “more real and adaptable.” A friend gave her an old kiln and a bit of advice to operate it, but “most of it came to me very easily, as if I was meant to do it,” she says. “It all happened very late, but it felt like coming home when I started the ceramics.”

Quickly, the forms turned into installations that filled walls because, she says, “I see my work as three-dimensional drawings in motion.”

The smaller parts of the whole are frequently life forms: female figures, plants, animals. “My work is predominantly about the cycle of life, and within that context my sculptures serve as pictograms, carriers of hidden messages,” Mallon explains. “There are figures covered by flowers and insects, an unusual sense of scale, bodies opening up to reveal scenes inside. I love when people have their own interpretations and their own magic.” 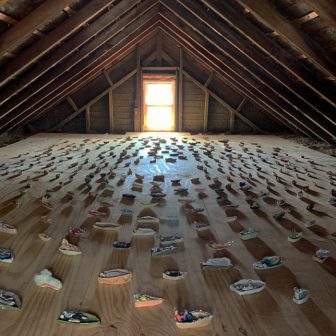 “About Forever,” an ongoing installation in Sascha Mallon’s attic in Beacon (Photos provided)

Much of the work is improvised. “One piece leads to the next and the next,” she says. “Once I have all the pieces, I bring them all to the space, where sometimes, the story changes.

“All the installations feel like they’re all part of one; it’s fluid — I could go on forever and have to cut myself off,” she adds. “When it feels good, balanced, holds together, it’s done, but it always wants to keep moving. The installations also change over time, evolving as new pieces are added and adaptations are made to display in new spaces. We all have to adapt to unpredictable situations, so these installations do, too.”

Mallon’s installations have been shown in New York at the Samuel Dorsky Museum, the Garrison Art Center, the Katonah Museum and Albany’s Collarworks, among other locations. In 2017 she was invited to participate in a residency and exhibition in Taiwan and in 2019 had a solo show at Walnut Hill Fine Art in Hudson, where she created an installation of ceramics, yarn and wall painting. She will have solo shows in the near future at the Woodstock Artist Association and Museum and at the BAU Gallery in Beacon. 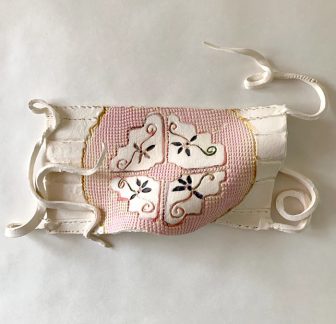 She says the biggest change to come with the pandemic has been having her daughter at home. “We’re trying to keep a schedule, distinguishing between weekends and weekdays,” she says. “During the week we work and have school. It’s important for keeping sane because time is such a watery thing.

“I try to focus on positive ways to deal with all of this,” she says. “I’ve stopped listening to the news so much. For my art, it has changed a little bit. I used to do much-larger-scale work, but I find myself now working in the kitchen, making tons and tons of little ceramic flowers, looking forward to placing them as an installation in the yard.”

Mallon has been working at Mount Sinai for nine years, interacting with patients, which she continues to do remotely. “When I came to the U.S., my plan was to work as an art therapist, but regulations were such that I would have to redo my master’s degree,” she says. “That was too much of a financial commitment, as I was already in my 30s. After attending an arts-in-health-care conference, I knew that’s what I wanted to do.”

At Mount Sinai, “I learned how to pay good attention to another person’s needs, how to face impermanence better and also to let go, because it’s a tricky relationship that mixes being professional but also giving people a lot of warmth and comfort,” she says. “What I learned is how art is magic, how it can bring happiness to people in awful situations. My hospital work connects to my own art; I practice it and give it back.”