Comes back from 9-0 deficit 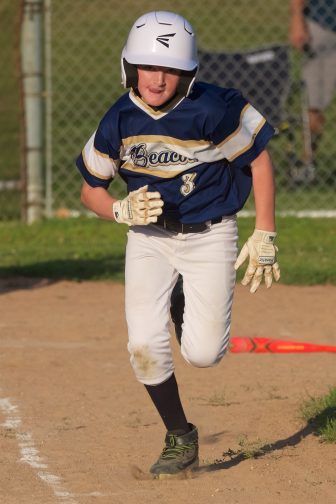 Aiden Heaton, shown here in an earlier game, hit a two-run double to give Beacon’s 10U baseball team its first victory of the summer, in the team’s final game. (File photo by S. Pearlman)

The Beacon travel baseball team for players ages 10 and younger had been searching for a win all season long, and with one game left, it wasn’t looking good.

The Bulldogs were behind, 9-0, going into the fifth inning against the Poughkeepsie Lightning on Aug. 13 at Memorial Park but pulled off an unlikely feat, scoring 10 runs in the last two innings of their season to walk off with a 10-9 victory.

“We took a lot of lumps playing in the A division this season, but we finally got our first win,” said Coach Jed Varricchio. “It was great. The kids were as happy as if they’d won the World Series.”

Caellum Tripaldi went 3-for-4 at the plate and drove in four runs for Beacon, while Hudson Fontaine was 3-for-3 with three RBI and Jake Deluise went 2-for-3 with one RBI.

“Heaton had been struggling a little at the plate, but today he and Fontaine came up big,” Varricchio said. “Nolan [Varricchio] had a nice game at short, and Jesse Apostolou played well in left field. Overall, our defense has gotten better all season.”

“We always struggle against Poughkeepsie, so this was big for the guys,” the coach said. “Now we’ll keep working hard and take it into the fall.”