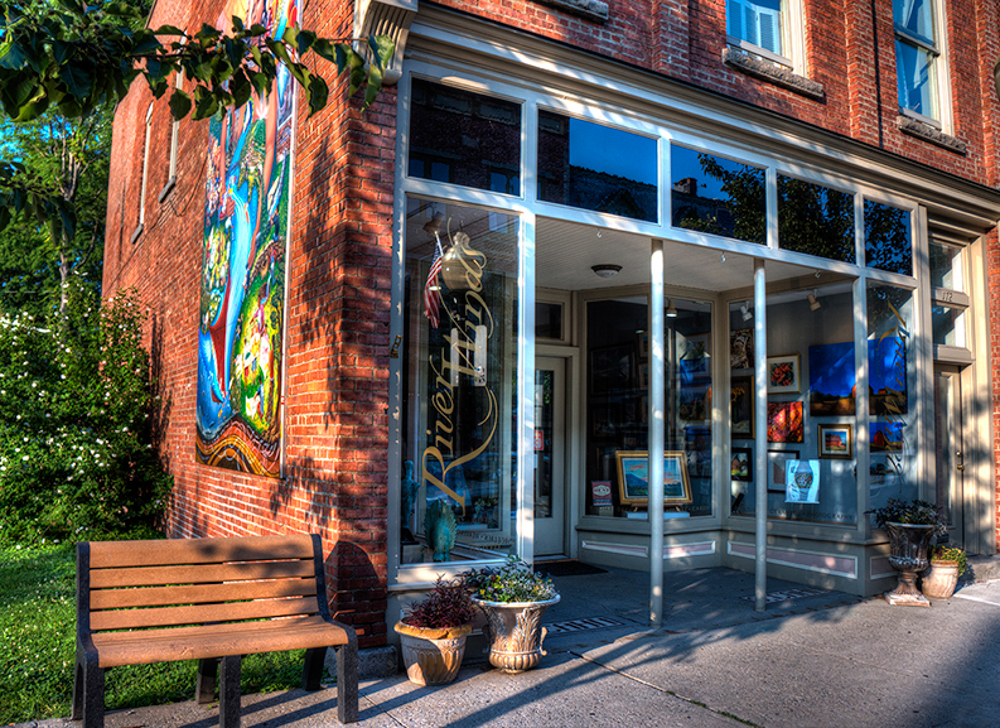 The RiverWinds Gallery in Beacon will close on Aug. 31. (Photos provided)

Gallery to close in Beacon after 17 years

On Aug. 31, RiverWinds Gallery, part of the first wave of art galleries and artisan shops to open during Beacon’s resurgence in the early part of the century, will close its doors after 17 years on Main Street.

An economic casualty of the pandemic, RiverWinds weathered the three-month March-to-May closing but found reopening in June to be on shaky ground. With so much uncertainty, the four co-owners — Virginia Donovan, Mary Ann Glass, Karl LaLonde and Kathy LaLonde — decided that enough was enough.

“We never quite recovered from 2008 — the big recession — but we kept going along until the pandemic,” Glass said. “We were closed like everyone else, but still had bills to pay. We were sort of just waiting to see how it would all turn out. When we opened again in June, it was clear that the economy wasn’t vibrant and we weren’t going to make enough money to pay the rent. We suspect that there may be another lockdown coming up; no one knows.

It’s been more than 20 years since Glass, who then lived in New York City, put in a request for a leave of absence with Chase Bank, where she was a vice president in employee communications.

“Everyone else was getting a leave of absence approved for pregnancy,” she recalled, remembering her comments at the time: “That’s not happening here, but I want to take the summer off to do an intensive at the Rocky Mountain School of Photography, in Missoula, Montana. How about me?”

To her surprise, her request was granted. Soon after spending three months in Missoula, she began selling her work at crafts fairs, she says. After moving to Cold Spring in 1999, she quit her job and moved to Beacon, where she rented space at a gallery called Allagash to sell her work.

“I didn’t lose money, made some sales, then did the same thing again, this time with friends, with the same result,” she recalled. “The rental gallery was a good way for me to get it known that I was in town, especially back then, when there was no social media. It felt like there were opportunities in Beacon.”

Glass and four friends — Paola Bari, Virginia Donovan, Linda Hubbard and Kelly Shultis — decided to open a gallery together. “In 2001 and 2002, the east end of Beacon was where the action was — people wouldn’t even drive down to the west end — but we felt that the west end was coming into its own,” Glass recalled.

Three businesses had opened: Highland Studios, Kate Rogovin Jewelry and Cup and Saucer, she said. “We looked at a store where Mary Madden had bought the building and Ron Sauer had renovated it; we were their first tenant. Hudson Beach Glass opened, and that was huge. They became our [west end] anchor. We opened in July 2003, just a few months before they did, the same year as Dia:Beacon. 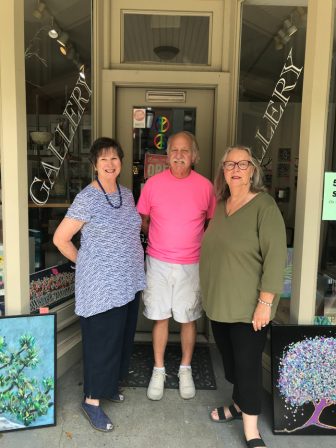 “There were five of us, and we all put some money in,” she said. “Luckily, we didn’t have 20 people at meetings, each with their own opinion! Most of us had quit our corporate jobs: three of us were from IBM, and me from Chase. We had the time and energy and some knowledge of how to run something. Because we had been in the crafts business, we knew good artists and craftspeople.”

RiverWinds worked with artists on consignment and at one point had the work of 50 artists on display. “Our product diversity kept us in business: fiber wear, jewelry, glassware, cards, along with paintings,” Glass said. “So many people came in to buy gifts. You probably don’t buy a painting for someone for holidays, because you don’t know what they like.”

Beacon was still in flux, Glass recalled. “It took a while for people to realize there were good things happening down this end. Galleries alone were not quite enough — it was when the restaurants started coming in and were scattered about; that was a big help.”

Then, as now, RiverWinds attracted many tourists. “Dia generated a huge amount of publicity,” she said. “For a while we were getting a lot of people from Europe, but that died down. But we always have had a lot of people visiting for the day or weekend from Connecticut, New Jersey, Westchester, Long Island. Even this past weekend, we had a fair number of people from the city coming up.”

Over time, the partners added and subtracted numbers. Two left, Galina Krasskova came in for a while, then retired, as did Linda Hubbard, who moved to Connecticut. Finally, there were four: Glass, Donovan and the LaLondes, who joined four years ago.

“It helped to have a lot of partners,” Glass said. “To do it on your own: the sales, the financing, the social media, it’s a lot. We divvied up the tasks based on people’s strengths. I can hang things on the walls but don’t get me near bookkeeping.”

The support of the community also helped the business, particularly from Beacon Arts, Glass said. “They’ve come up with such great promotions, such as Second Saturday. They’re responsible for a lot of what has happened that’s good.”

Although insisting that she is “not a civics person,” Glass mentioned limited parking and rising rents as impediments to the arts and small businesses in Beacon.

“If the rents get too high, that becomes a problem because the storefronts are small,” she said. “The stores are going to have to work on their online sales; most of the new ones are. Beacon has changed a lot in 17 years, but what was true is still true: The more galleries you have in a place, the more business there is for everyone.”

Now, along with the melancholy of closing RiverWinds, Glass and her partners are basking in the affection they are receiving from the community. “It’s been gratifying that since we announced our closing, we’re getting all these wonderful messages of support, rather than an ‘Oh, OK.’

“We want to continue to sell our artwork somewhere or another, whether it’s a brick-and-mortar building somewhere less expensive, or online or a combination,” Glass said. “We need to reinvent ourselves.”

One thought on “A Bittersweet Farewell”