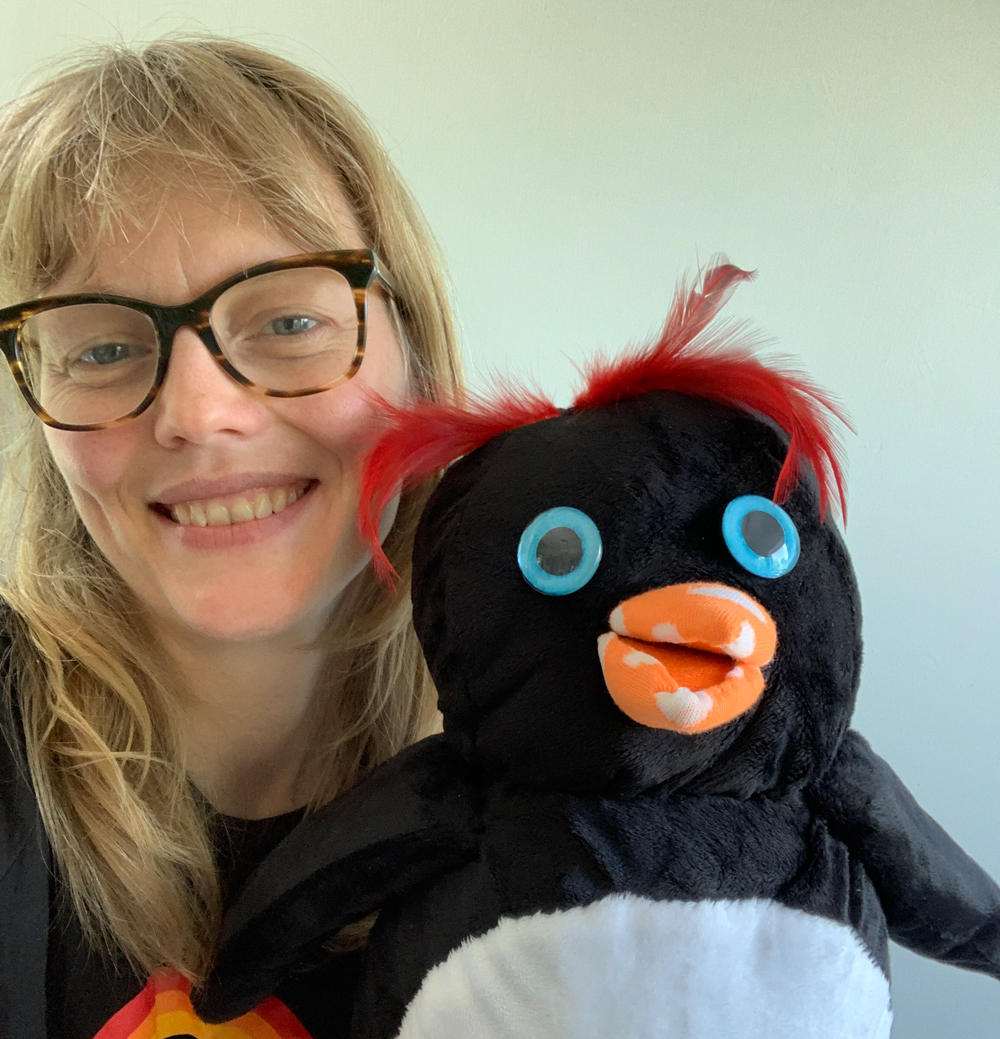 Vibeke Saugestad, of Beacon, is a Norwegian-born translator and musician.

How did you learn ventriloquism?

I fell into it. A few years ago, I was watching a lot of Christopher Guest movies, and there’s one, less widely known, For Your Consideration, in which ventriloquist Nina Conti plays a weatherperson with a monkey puppet. I loved the fact that her monkey was his own little being. When the coronavirus hit, like everyone else I was stuck at home, trying to study a pamphlet on learning to drive, because I never have. But it was so boring, I decided instead to try ventriloquism.

How did you begin?

I found a book online, Ventriloquism Made Easy. And then I learned that Nina Conti would be streaming from her home for charity. I bought a ticket, thinking she’d be doing a show. It turned out that some people were chosen to be on a Zoom call — I was one of them — so I was on Zoom with Nina, her monkey puppet and about 20 other people. It turned out to be an inspiring experience.

Is there any secret to throwing your voice?

Practice is important. Not moving your lips while talking isn’t that hard, but making the reactions seem natural while you’re talking to someone else — who is actually yourself — is hard. I videotape myself. It’s also about illusion, little things you do to draw people’s eyes from what they shouldn’t see. The voice isn’t the most important part. You have to be funny or have something that will make people want to watch. It’s about psychology and mannerisms.

Why did you choose a penguin as your partner?

I began by looking at puppets online, but they weren’t inspiring. So, I made one instead. I have always loved penguins — they’re quirky and fun and sweet, so it felt like a nice animal to choose. I watched videos on puppet-making. I wanted to use things I already had in the house and recycle stuff. I love crafts, making things. We were having some food deliveries and I used some of the packaging to create the body and built him from the ground up.

As he came alive, it was sort of ‘There you are’ — he became easier to bond with, which makes the act of ventriloquism much easier. I do feel he is my little buddy, and that’s the key to it. I have no ambition other than doing something fun for myself. I feel what’s important is to create the bond between yourself and this being. Before he came into physical being, I was thinking he would have a Norwegian accent, but once he got on my hand, his voice was not an accent. Instead, he was soft-spoken.

Do you play a character, as well?

I am me. A funny thing was, early in this process, my husband came home and heard me practicing, and shouted, “Where are you guys?” 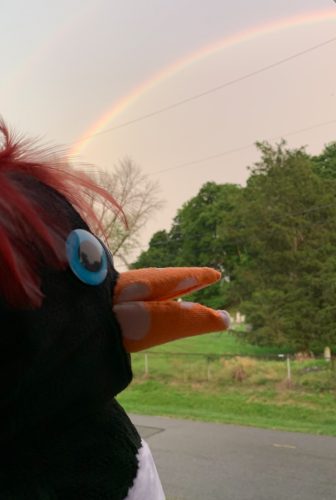 Punguin is in awe of a Beacon rainbow.

You named your puppet Punguin. What’s his back story?

I love puns as well as penguins, and when a friend heard this, he suggested Punguin. What I have learned is that he’s from Norway; his family emigrated to the U.S.; his aunt retired to the Bergen Zoo; and he’s proud of his cousin, who had a part in Happy Feet. Also, Punguin loves licorice and pancakes — he uses the flipper to eat them. Also, he is musical. He made his debut with a song by The Velvet Underground and when it was played on YouTube, a request came in for another Velvet Underground song!

How did Punguin make his debut?

I started by making a little video, a pre-movie “please turn off your cellphones” kind of thing. Friends thought it was fun, so I made a couple more and now Punguin has hit Instagram.

You sing with the three-part harmony group The Wynottes. Could there be a fourth part?

My fellow Wynottes, Daria Grace and Sara Milonovich, and I are working on a Christmas album, but Punguin will be sitting this one out.

Is Punguin ready to go out and about in Beacon?
He is one of a kind and has a white belly, so he can’t be out and about too much. The other day I was holding him outside my house and a boy walked by and wanted to play with him but he had chocolatey fingers. I had to say, “So sorry, dude.”

Is it true that some people don’t like talking puppets?
Yes. The thing with ventriloquist puppets is they have a history of being the person’s alter ego. Nina Conti’s puppet, Monkey, says all the things she doesn’t want to say. That’s their dynamic. But Punguin is cheerful, into spreading love, making cheer-up videos. Although he’s all about happiness, there’s a mischievous side to him, too. But the darkness hasn’t shown itself yet. That’s part of why he came about now. I needed a place to escape, and those places, unfortunately, are getting harder to find. Punguin has been a bright spot.