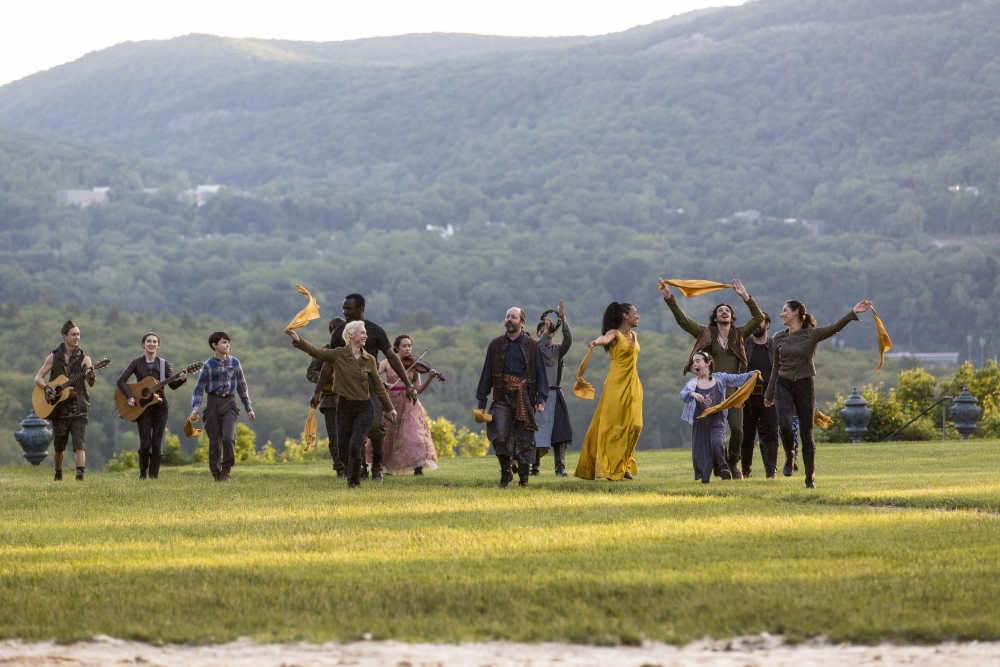 The new home of the Hudson Valley Shakespeare Festival will still have a tent and a pristine view of the river. (Photo by T Charles Erickson/HVSF)

The Hudson Valley Shakespeare Festival, which since 1987 has held hundreds of summer performances at Boscobel in Garrison, will move in 2022 to a 52-acre parcel donated by Chris Davis, who owns The Garrison country club.

Davis offered in October to donate the land, along with The Garrison’s restaurant and catering business, while the HVSF board was discussing a new, long-term lease with Boscobel. Davis McCallum, who has been HVSF’s artistic director since 2014, called the gift “a transformational opportunity” for the festival that could change it into a regional cultural anchor as well as a community center.

The 2020 season, which would have been the festival’s 34th, was canceled on April 30 because of concerns about the spread of COVID-19. The festival will return to Boscobel for a “farewell” season in 2021 before moving to what is now the back nine of The Garrison, which will become a nine-hole course, McCallum said.

The festival will replace its iconic view at Boscobel, which was used as a backdrop for its performances, with a view of the Hudson that is presently the 11th fairway.

“I might suggest it’s even more spectacular than Boscobel,” McCallum said cautiously on Tuesday (Aug. 25), noting that “it has Storm King and Breakneck framing the gateway to the upper Hudson Valley. For those of us who aren’t golfers, I don’t think people are aware of what an amazing view there is from that fairway.” 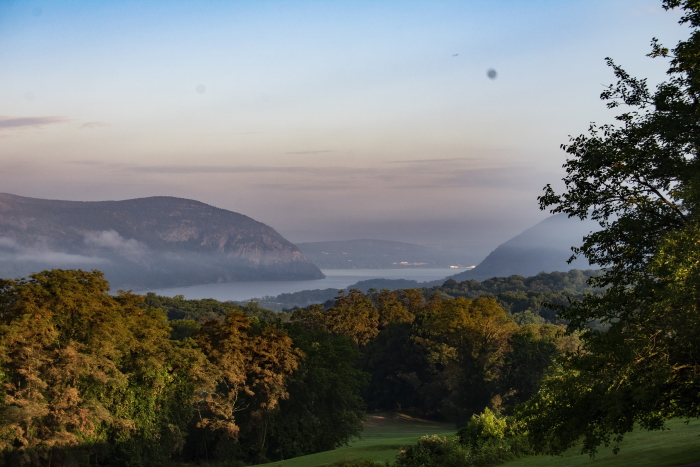 The view from the 11th fairway that will be the new home of HVSF. (Photo courtesy of The Garrison)

Added Kate Liberman, HVSF’s managing director: “The actors will still come across the ridge and you’ll still hear the crickets and feel the breeze and there may still be a skunk that walks across the stage,” alluding to a particularly memorable moment in the tent at Boscobel.

According to the plans that the HVSF will present to the Philipstown Planning Board, likely in October, The Garrison property would be divided into four parcels: 52 acres for HVSF; 95 acres for the golf course; 28 acres for Davis’ private residence; and 27 acres along Route 9 that may eventually also be gifted to HVSF, McCallum said.

The 52 acres given to the nonprofit HVSF would presumably be removed from the Philipstown tax rolls. There was no value given for the gift, but the acreage would be taken from two parcels that total about 142 acres and have been given a full-market value of about $8.5 million by the town assessor.

As part of the gift, the Shakespeare Festival will create a separate, for-profit entity to oversee The Garrison catering business and Valley Restaurant, with profits returning to the festival, McCallum said. Davis will continue to own and operate the golf course.

The festival plans to begin a capital campaign soon to raise money to build a new tent for the space that will be designed to remain up year-round. (Under its lease with Boscobel, the tent must be taken down each fall.) The current tent holds about 530 audience members and HVSF expects its new tent will be about the same size, if not smaller. 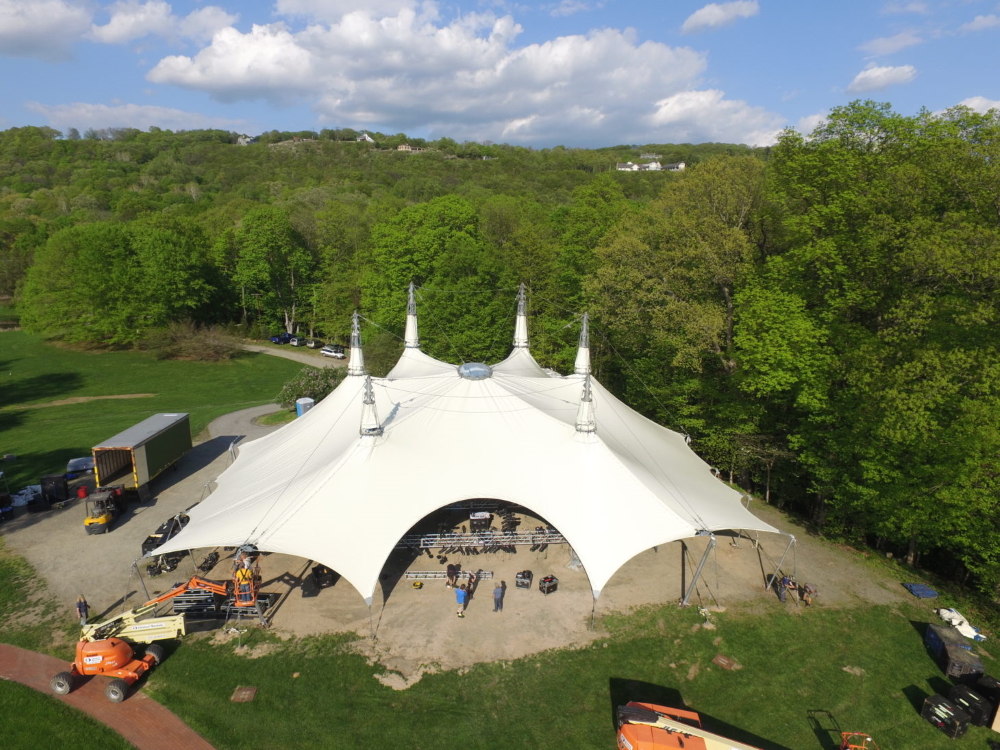 The move also will allow HVSF to consolidate the five rented spaces it uses to store costumes and equipment, which include Winter Hill in Garrison and a Putnam Valley barn.

The festival said it will commission artists to “animate” the new site, including Marti Lyons, Ryan Quinn, Kholoud Sawaf, Madeline Sayet, and Melissa McGill and composer Heather Christian, both from Beacon.

Davis has owned the 200-acre parcel, located at the intersection of Route 9 and Snake Hill Road, for more than 20 years, McCallum said. Davis is a director of the Hudson Highlands Land Trust, which he chaired for more than 15 years, and the chair of the newly formed Hudson Highlands Fjord Trail. He also is a vice chair of the American Museum of Natural History, a former director of Scenic Hudson and a generous financial supporter of the Shakespeare Festival, McCallum said.

Jennifer Carlquist, who in April was named executive director and curator of Boscobel, said in a statement released by the Hudson Valley Shakespeare Festival that the historic site was “thrilled for our colleagues and excited for the opportunities that this opens up for all of us.”

In an email on Wednesday (Aug. 26), she elaborated: “Like all nonprofits, Boscobel depends upon donations to stay vibrant and strong. HVSF was a large part of Boscobel’s earned revenue, but we were working around each other’s schedules, so their move gives Boscobel the opportunity to develop and program our own site and earn revenue more freely.

“Boscobel believes strongly in collaborating with and expanding our audience through partnerships with other organizations, such as the Cold Spring Farmers’ Market,” she added. “That said, people seek out Boscobel for what we do best — fostering personal experiences with the beauty and history of our iconic landscape, house and collections. The overwhelming demand and feedback that we’ve received from visitors this year indicates that will continue to grow.”

Davis McCallum at HVSF had nothing but praise for the festival’s longtime hosts. “I want to say how truly grateful we are to Boscobel,” he said. “When you think about 75 performances a summer — that’s hundreds of performances on that site — and all of the stories that have been told and memories that have been made there. We’re looking forward to being back in 2021 to celebrate that.”

McCallum noted that the pandemic has put open-air performance spaces in demand, and that he has fielded calls every week since March from artistic directors of theater and opera companies and music festivals.

“I know what they’re going to ask about” even before the conversations begin, McCallum said. “They want to know about the tent. Where did you get it? How much does it cost? How quickly can they make one?”

HVSF expects next month to announce the plays for its 2021 season. “We are hopeful we will be able to gather outside with an audience,” Liberman said.

McCallum noted that when the 2020 season was canceled in April, “we weren’t making guarantees to roll over the shows [which included Richard III and Love’s Labor’s Lost, as well as a commissioned adaptation of a 1747 play, The Venetian Twins]. We canceled three gorgeous plays and each one hurt in its own particular way.

“But I’m glad we didn’t [roll them over] because part of the fun of planning a season is trying to find plays that speak to the moment, and so much has changed in the past five months,” he said.

Liberman said that although the pandemic has been “horrifying,” the festival was fortunate to be able to cancel its season before it began, while many other theaters were in the midst of rehearsals and performances. HVSF also received a federal Payroll Protection Program loan to pay its artists during the lost summer — “it was not significant, but it was at least something,” she said. “The shutdown shifted the whole company into a planning mode.”

The HVSF is viewing the gift as a mandate to become even more environmentally conscious than it is already, McCallum said.

“Chris Davis has, I think, for several decades been looking for a community-minded, sustainable, adaptable reuse for the space,” McCallum said. “I think he saw in the Shakespeare Festival a local organization that could be the next steward of the land. 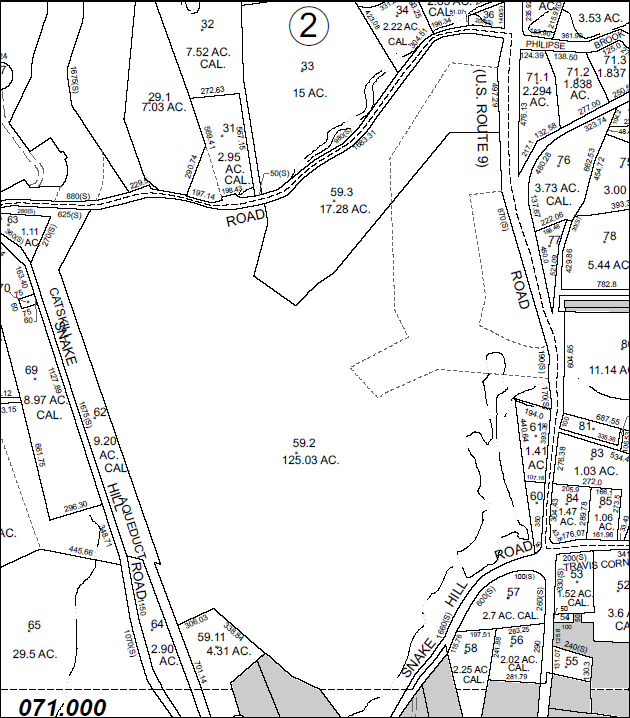 A Philipstown tax map shows the large parcel from which much of the acreage to be donated to HVSF home will be taken.

“The gift is truly historic because things like this just don’t happen in nonprofit theater anymore,” he added. “It’s miraculous that there are these 200 contiguous, immaculately preserved acres 50 miles from New York City, and add to that Chris’ vision to choose an arts organization as the next steward of this natural resource. We have an opportunity to model what a green performing arts center can look like,” while noting that “a tent is about the most environmentally friendly space you could come up with.”

McCallum envisions the new tent in 2022 including natural convection cooling (“the hot air can up the masts”) and that the festival will consider “ways to generate power on-site, how we organize concessions, what sort of bathrooms we design” based on environmentally friendly concepts.

In addition, HVSF is looking at ways to open the site to the community. “There are amazing event spaces at The Garrison that are used for weddings on weekends but are pretty much empty Sunday night through Wednesday night that could be used for meetings or galas,” McCallum said.

The restaurant kitchen will allow the festival to prepare concessions on-site and to offer indoor dining before shows, said Liberman. The food sold at Boscobel is prepared by local vendors but brought from elsewhere, she said.

Finally, the new site will give HVSF its own space for rehearsals and programming.

“We will probably still start rehearsals in the city,” where many of the actors live, Liberman said, “but we have always rented space for summer rehearsals.”

The festival each year sends teaching artists to about 60 schools in the Mid-Hudson Region but will be able to bring students to its campus for matinees and workshops, Liberman said. It also will be able to host fall and winter readings held at spots such as the Philipstown Depot Theatre and summer camps held at Haldane Middle School.

“And our season won’t be capped at Labor Day” when the Boscobel tent comes down, she said. “We can continue into the fall when the foliage is spectacular and summer nights are not as hot.”

Join us for a conversation with Davis McCallum at 7 p.m. on Wednesday (Sept. 2) via Zoom about HVSF’s plans. Register here.