Review of Route 9 project held over for another month

After inviting residents’ questions and raising some of their own, Philipstown Planning Board members last week prolonged scrutiny of a proposed Route 9 warehouse to allow more time for the public to review traffic data and for the applicant to supply additional details.

At its Aug. 20 meeting, held via Zoom, the board voted unanimously to extend a public hearing on an application by CRS International to construct a 20,340-square foot warehouse with offices on a 2.5-acre lot on Route 9 about one-third mile south of Route 301. The site is zoned highway-commercial.

Founded 38 years ago, CRS is a Philipstown-based firm that imports and distributes fashion brands and provides the logistical and related services necessary for overseas firms to reach U.S. markets. It plans to keep its current location but said it needs room to expand. 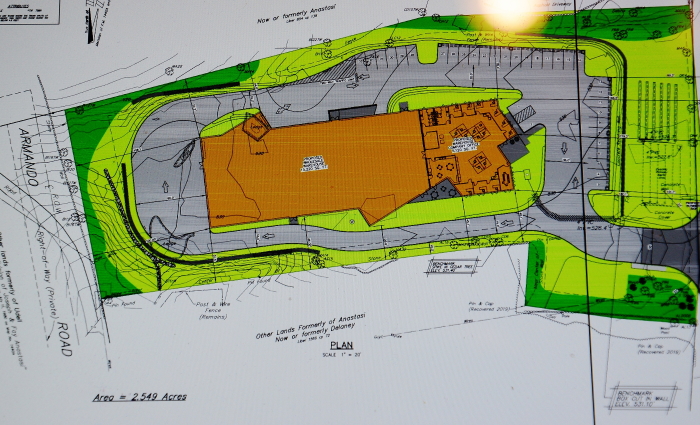 The proposed CRS warehouse; the entrance and Route 9 (not shown) is to the right.

When the public hearing opened in July, neighbors said they worried that tractor-trailers entering and exiting the site would increase traffic hazards on a stretch already plagued by speeders. Those concerns surfaced again on Aug. 20, although data presented by John Canning of Kimley-Horn, a traffic consultant hired by CRS, showed there would be little impact.

CRS would employee about 30 people at the site, according to materials filed with the Planning Board.

In his written report, Canning stated that the warehouse would only increase traffic volume on Route 9 by about 1 percent during peak hours, or weekdays between 7 and 8 a.m. and 4 and 5 p.m.

Canning also said the average speed of traffic passing the site was 44 miles per hour, or 6 mph lower than the speed limit.

Board members expressed their doubts about that assessment.

“It’s pretty unrealistic to report that traffic is going below the speed limit at this spot,” said Board Member Heidi Wendel. “That strains credulity” and contradicts both her experience and residents’ testimony, she explained.

“There is no way people are driving less than the 50s [mph], or rarely,” added Neal Zuckerman, who chairs the Planning Board.

Canning responded he was confident his numbers were accurate but promised further analysis.

Lawrence Smith, who lives near the site, described Route 9 as “one of the most dangerous roads I’ve ever driven on.” He said that “adding more capacity to that road is a terrible idea.”

Madeline Rae said the CRS project would mean that 53-foot trucks, “the largest tractor-trailers, are going to be in the heart of Philipstown.” She predicted that “if we have one massive warehouse we’re just going to have more and more” and observed that warehouses already exist around the I-84 and Route 9 interchange in Fishkill, where empty shopping mall space also invites occupants.

Rae urged the Planning Board to reject the CRS warehouse because “it will be devastating for Philipstown.”

Eric Barreveld of CRS told the board that the firm does not intend “a dramatic expansion in traffic or business” and only anticipates two or three tractor-trailers a day using it. “We want to do this the correct way” and to “satisfy our needs as well as the needs of the public,” he said.

The board scheduled further discussion for September.