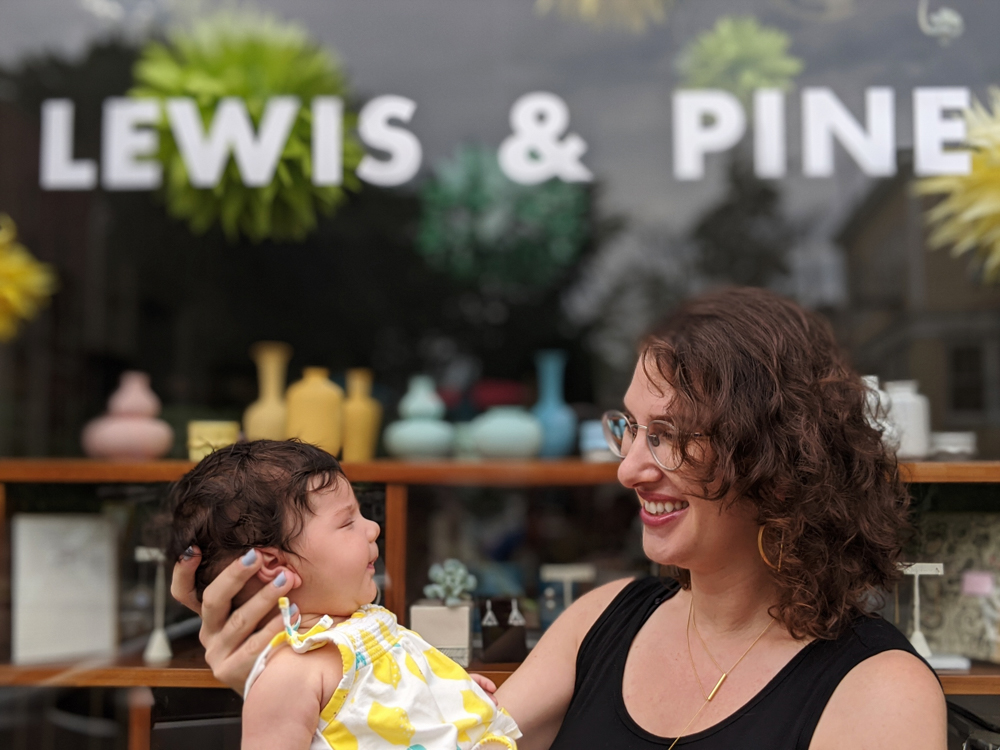 Yali Lewis had it all figured out.

She had a May due date for the birth of her daughter, and knowing she’d have less time to devote to Lewis & Pine, her store in Beacon, she built up the inventory of jewelry she designs and makes, as well as works by other artists.

Then came the pandemic, in March, which shut the store down (although online sales continued). Now, Lewis and her husband, Steve Jacobs, the proud parents of Liora, have reopened, determined to get the business going again.

“It was a challenging time to be pregnant,” Lewis says, although she noted that with a newborn, she was not affected as much by the shutdown. “You don’t run around like regular people do,” she says.

Lewis has been working with metal since the seventh grade, when she was inspired while taking a metalsmithing class. “There’s something magical about being able to take immovable material like a hard metal, heat it and hammer it and transform it into something that can do all these different things,” she says.

After studying art history and fine art as an undergraduate, Lewis, who grew up in Poughkeepsie, moved to New York City, where she earned an MFA in fine arts from Parsons School of Design.

She later taught art history and photography there, then landed a teaching job at a high school. All along she made jewelry. “My interest in art history informed the kind of designs I was able to make,” she says. “Looking at contemporary art pieces like those of Richard Serra at Dia, and Sol Le Witt’s line-making — looking for forms in other media opened up the horizons in design for me.” 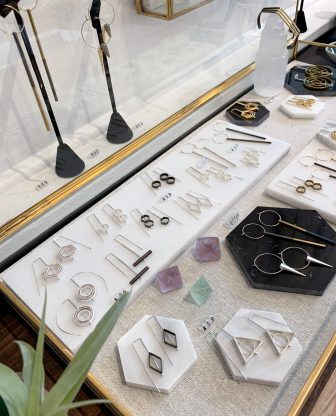 After raising $7,000 from a Kickstarter campaign, she bought a folding table, jewelry and necklace busts, and a tent to show and sell her work at craft shows and to open Lewis & Pine inside Brooklyn Flea. (The “pine” is a nod to an eastern white pine that her father planted when she was born.)

When she had enough capital, she moved to the Bryant Park Holiday Market in Manhattan. “The rent is a lot, and you have to build it out yourself — lighting, heating, flooring,” she says. “Since it’s open every day, with long hours, you have to hire help. It’s a significant investment but there is a huge amount of foot traffic, so it gives you name recognition and lots of return customers.”

It was that experience that gave Lewis and her husband — who works in digital communication and marketing — the courage to open a brick-and-mortar location in Beacon, where they had moved after being lured by nature, the arts and a sense of community. The store opened in December 2018.

Some of Lewis’ designs follow modernist lines, while pieces made since the move to the Hudson Valley are inspired by the natural world. “Collecting material while on hikes has shifted my work toward the botanicals,” she explains. “I make a mold of, say, a leaf or twig, and that mold is used to create the jewelry piece.”

Lewis also produces apothecary products such as diffusing oils, and there are soaps, notebooks and ceramics made by others. 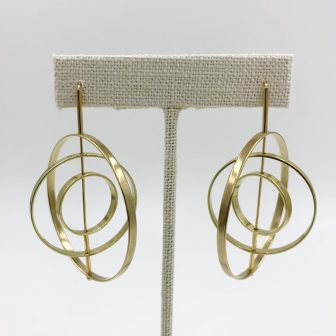 Saturn” earrings designed by Lewis that, she says, “Illustrate the kinetic, sculptural and modern qualities of my work.”

Although the first weekend’s sales after the reopening were better than expected, the couple admits they had misgivings. The two storefronts to the east are empty, and foot traffic is half of what it was a year ago.

In the past month, however, the number of customers has increased, she says, and “the mood feels more upbeat, with more strolling, looking in windows.”

Lewis says she will not be surprised to see more Beacon shops close because of the shutdown. “I don’t think everyone can sustain a much-longer period of low sales,” she says. “We’ll make it, but other businesses may have smaller margins.”

The pandemic has changed her perspective, as well, Lewis says. There’s a “feeling of reassessing priorities,” she says. “So many of the things I cared about just aren’t important anymore. My life has shifted with being a mother and the intensity of concern about health.”

She said the business is important to her “particularly in connecting to the community. When I meet other business owners, or just people in town, and I say ‘Lewis & Pine is my store,’ it gives you an identity, a part in keeping the community alive, keeping Main Street vibrant. Every business that closes makes that world smaller. Keeping the lights on in all of our businesses means more to us than just as owners. This business has ways of meshing in our lives, beyond a paycheck.”