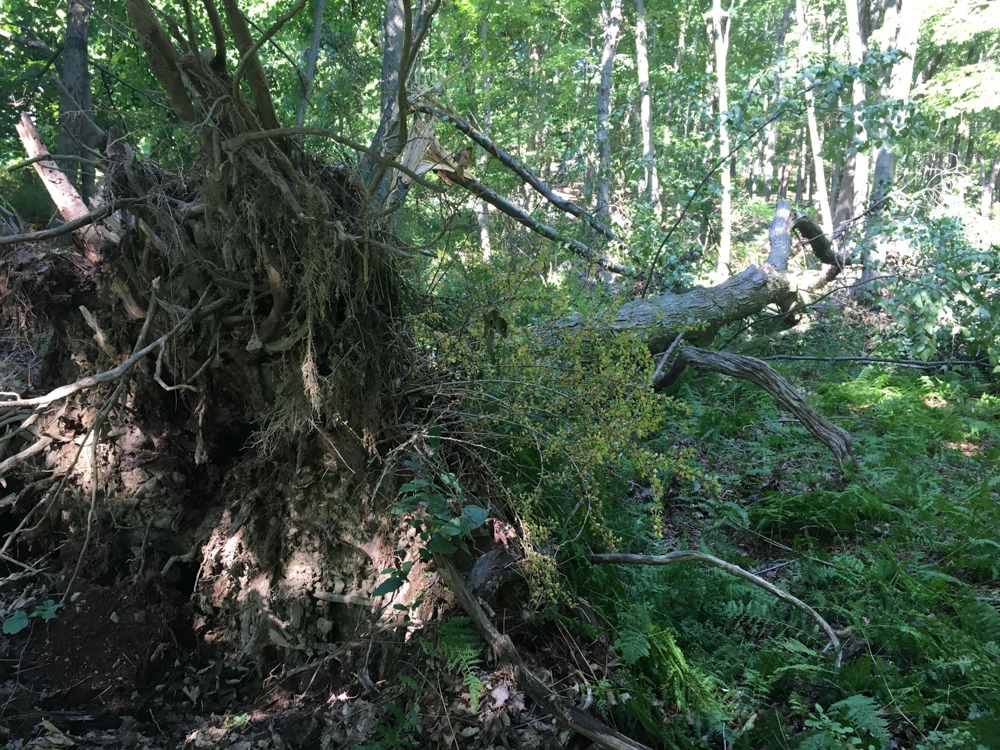 One of the many trees downed during the recent tropical storm. When you add up the lost benefits of this tree and others, the damage is significant. (Photo by P. Doan)

After 10 years of living in the Highlands and experiencing many storms, including Hurricane Sandy and Tropical Storm Irene, I expected Tropical Storm Isaias to be uncomfortable — lost electricity, internet, etc. — but not too damaging. I was so wrong.

While I watched from the windows, trees in my yard were cracked, broken and thrown over by the wind. Previous storms, even the microburst in 2018, didn’t topple or damage as many trees in our landscape as Isaias. In a future column, I’ll explore why that happened and how some trees are more vulnerable, but for now, I’m trying to turn the loss into an opportunity.

In the 9 acres we steward on East Mountain in Philipstown, at least a dozen trees were lost. Fortunately, none was close to animals, buildings or people. Trees we loved, including the white pine behind our house that I’ve estimated is about 250 years old, were damaged. No insurance policy or repair service can restore them.

Here’s a breakdown for a single lost sugar maple that was about 20 inches in diameter, according to the National Tree Benefit Calculator (treebenefits.com):

Loss of canopy trees means openings for sunlight on the ground and in the understory, and here is the opportunity. Since much of the native understory, herbaceous and woody plants, has been browsed out-of-sight by deer and replaced by invasive plants like Japanese barberry, I can improve the landscape with plantings that will thrive now. As long as I protect these plantings with grow tubes or fencing, I might have a chance at creating little pockets of regeneration.

This is a 15- to 20-foot-tall multi-stemmed tree with berries that birds love and spring blooms, and it’s a host species for the striped hairstreak butterfly.

The nuts are eaten by a wide variety of wildlife and birds. It is also a host for several moth species and its flowers are important to pollinators.

Witch-hazel
(Hamamelis virginiana)
When you find a tree blooming in the woods in winter, it’s probably this one. Many species of birds eat its seeds and it is a host plant for the spring azure butterfly.

Eastern red cedar
(Juniperus virginiana)
This is actually a juniper, not a cedar, and it’s important habitat for 50 species of birds, as well as small animals. It needs full sun and reaches more than 50 feet in height and can live for 500 years. Its root system stabilizes soil and it tolerates drought, heat, wind and other stressors well.

Since I’m trying to establish a herbaceous layer as well as understory trees, I am going to split the difference and experiment with part-shade plants that will tolerate some shade as the trees and shrubs grow up around them. Here are perennial plants for sun to part-shade and shade:

Foam-flower
(Tiarella cordifolia)
I’ve cultivated this spring-blooming flower and the deer haven’t been eating it (yet?). It spreads nicely and is easy to grow.

White snakeroot
(Ageratina altissimo)
Pollinators will appreciate its white flowers while most animals will avoid it. It will also spread out and I’ll allow it to seed itself.

Wild ginger
(Asarum canadense)
Forget the hostas, which are deer candy, and plant wild ginger instead. In the woods, it will hold its leaves throughout the season and deer will leave it alone.

Black cohosh
(Actaea racemosa)
This is familiar as a medicinal herb but, in the forest, its tall, white flower stalks have a striking appearance and it is a host plant for the Appalachian azure butterfly and is important for pollinators.

While these plantings will take many years to do the work that the lost trees performed for our benefit, I’m prioritizing increasing biodiversity in this plot of land over replacing hardwoods. Every situation is different.