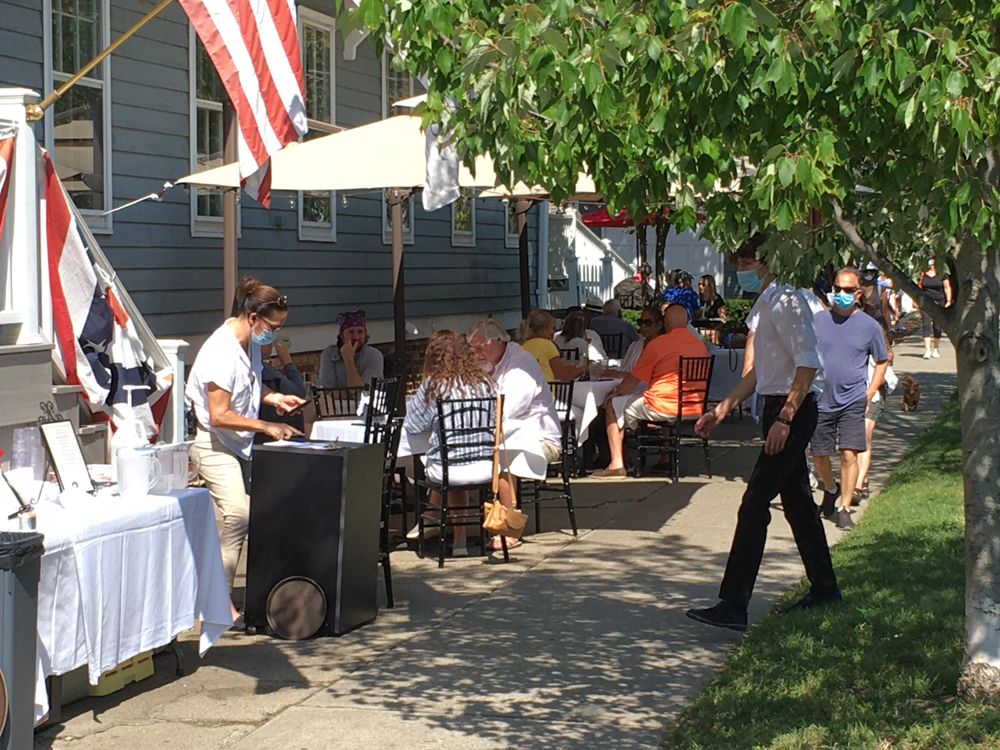 A surge in customers has the Hudson House River Inn looking for additional help. (Photo by L. Sparks)

August and a run of rainless days have brought crowds of day-trippers from New York City and New Jersey to Cold Spring, fueling for some eateries a better-than-expected summer season that began late following the three-month COVID-19 shutdown.

Owner Regina Bei cannot “recall the town being this busy — ever.”  She also never needed to hire a full-time bartender.

The unexpected demand is palpable.

At the Village Board meeting on Tuesday (Sept. 8), Deputy Mayor Marie Early reported that the municipal parking lot on Fair Street was filled to capacity from Sept. 4 to Sunday.

“That has never happened before,” she said.

It was a far cry from March 22, the date Gov. Andrew Cuomo ordered all non-essential businesses shuttered to prevent the spread of COVID-19, and May, when retail shops, restaurants and other closed businesses began getting approval to reopen. In between, owners had to lay off employees and pivot to online-only sales and takeout.

Before the shutdown order, as customers hunkered down in fear of becoming infected, Greg Pagones, owner of the Cold Spring Depot, was weighing whether to stay open even for takeout. On the afternoon of St. Patrick’s Day, March 17, he had received just five orders for corned beef and cabbage dinners.

Business is down 45 percent for July and August compared to last year, but the last three weeks “have been the best of the summer by far,” Pagones said on Thursday (Sept. 10).

“I attribute it to lower temperatures and little rain,” he said. “I’m hoping, with many working from home and schools still on remote learning, we will see a good turnout between the weekends.”

When shops and restaurants in Dutchess and Putnam counties were allowed to begin reopening in phases starting in May, they faced myriad challenges: limits on capacity, hesitant customers and the widespread cancelation of crowd-drawing events like the Hudson Valley Shakespeare Festival.

In July, the Cold Spring Village Board voted unanimously to cancel large-scale events through the end of the year, including the Putnam County Wine and Food Festival and the Hops on the Hudson beer fest. The board also canceled visits by the Seastreak cruise line, which brought hundreds of shoppers to the village each fall.

When Bei reopened on June 24, business “was building back at a steady pace but not normally where I would have been.” Since the beginning of August, however, “it’s just been crazy down there,” she said.

Cathryn Fadde had a “very low bar” for the summer, but on Sunday, Cathryn’s Tuscan Grill did about the same amount of business that it did for all of May, when she could only serve food via takeout.  Business has been “much better than expected,” she said.

Eliza Starbuck, president of the Cold Spring Chamber of Commerce and owner of Flowercup Wine on Main Street, has also seen the difference.

“In speaking with different business owners, and from my own experience, I can report that customer traffic has been good in the past few weeks,” said Starbuck.

It has also spurred a need for workers.

In addition to seeking a bartender, Bei, during the last week in August, posted on Facebook a need for other positions, including a dishwasher and line cook.

Higher up on Main Street, Fadde has been unsuccessful in her search, since July, for a waiter to take the pressure off her and the existing staff.

“I am one good waiter short,” she said. “And I’m just not getting that person.”

Some business owners believe that, despite the widespread layoffs of service workers during the shutdown, a $600-a-week payment in extra unemployment benefits, approved by the federal government in March and offered until July 31, convinced some people to stay home rather than return to work when businesses reopened.

Some studies have concluded just the opposite. A study by Yale University researchers “found no evidence that recipients of more generous benefits were less likely to return to work.”

Finding employees has been a “mixed bag,” said Brian Arnoff, who owns both the Kitchen Sink and Meyers Old Dutch Food & Such restaurants in Beacon. Early on, as unemployed workers received the extra payment, there was difficulty, but “after the extra money expired, “we had people who wanted to work again,” he said.

The bigger challenge, he said, is keeping employees healthy.

“Our policy is, if you have any type of suspect cold, sneezing, basically anything, we tell you to stay home,” he said. “To then have to find somebody to fill that position is difficult.”

In Beacon, foot traffic has been down but still “pretty good,” said Arnoff. Neither place is offering indoor dining, and Kitchen Sink is operating under limited hours.

While Meyers Olde Dutch is still behind the level it was at last summer, “we’ve dug ourselves out of the hole significantly in terms of how far down we are, so that’s doing OK,” said Arnoff.

“I always tell people, at this point, we’re just kind of holding our breath and trying to survive until spring of 2021,” he said.