Printmaker’s process leaves much to chance

People who have attended more than one of Jebah Baum’s exhibitions often find them quite different from each other. This may be because Baum moves between media — his last show at the Beacon Artists Union, where he is a member, featured sculptures he made from downed trees using a wood mill on his Gardiner property, while his new show there, which opens Oct. 10, consists of prints. 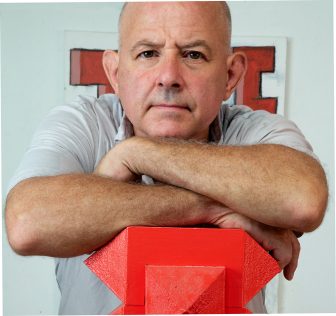 “People often have the impression that one group of my work is different from the next, but I don’t feel that myself,” Baum says. “I tend to work in two lines: one is more reductive, minimal and geometric, though not terribly rigid or mechanical. There’s also a lyrical, gestural side. Overall, I like balance, composition, line and body — all the elements of design.”

A thread running through all of Baum’s art is spontaneity. “I’m always trying to subvert my own expectations and preconceptions,” he explains. “For example, with the wood sculptures, I enjoyed flipping the pieces around, seeing how they worked three-dimensionally, then adding surface work to give them a feeling of both wood and another material at the same time. What emerges is a response to the process, rather than something pre-meditated.”

It’s important to Baum “to leave traces of the process — the story of my work is its own creation: how it was made, the material aspect of it, the choices that were made in the process: what’s present and what’s not present.”

As Baum grew up, with a painter father and a dancer mother, the arts were front and center in the household, and he took classes at the Brooklyn Museum and the Arts Students League in Manhattan. Hoping to learn a trade in the arts, Baum earned a BFA in printing from SUNY Purchase, then worked at several studios, where he helped print work by artists such as Frank Stella, Helen Frankenthaler and David Hockney.

In quick succession, he went to graduate school at Cornell, then, fed up with the challenges of living as an artist in New York City, moved to Sweden for six years — where, he notes, he was able to live off selling his art. (He and his wife still own a small house in Sweden where they decamp each summer — except for this year.) Returning to New York, he became a teaching artist in the New York City public school system while developing Interart Space, a nonprofit gallery on Mercer Street that was open from 1990 to 1995.

Baum taught printmaking and art theory at Wagner College for a decade, then left to focus on his art. “The last 10 years I’ve been cobbling it together,” he says. “I have a small frame-making business, plus I build things for people. It generates income, and it’s a creative tool and a good way to not waste materials that exist on my land,” he explains.

In this latest BAU exhibition, Baum says he took the approach of “inventing — or reinventing — techniques that are themselves difficult to control. The images in this exhibition are made using lithographic plates that I made myself from paper. Although I can create many plates quickly, I am only able to achieve a few impressions from each before they start to degrade. As a means of reproduction this is a poor method, but I find the resulting images are stimulating and full of vitality.”

Some of the works, such as a series called Flaneur, were the result of a collaboration with composer Steven Takasuga. The two met at the Virginia Center for Creative Arts, where Baum was on a residency and working on developing his lithography, enjoying its qualities of “some nuance, but also a bit crass, brusque, so you can see a lot of artifacts: fingerprints and grease marks get in and they become part of the image.”

After hitting it off, the artists began exchanging digital files. “It’s been an exciting intellectual dialogue, involving sympathetic understanding of each other’s work,” Baum says. “He creates digital samples, and he was using coordinates to generate some of the files that I converted into plates, and responded to them, and added color. We’ve found that we had sympathetic ideas about expression and chance.”

Overall, Baum says, “I don’t tend to sit around thinking about things. I tend to respond to things, but this particular group of prints — they’re an interesting reaction to what we’re going through. We all are experiencing our lives; they’re familiar, yet everything is different, and there’s an ominous quality.”

2 thoughts on “Familiar, Yet Different”