Even though home computers have been around since the late 1970s, when the pandemic closed schools last spring, it created a challenge for some parents trying to help their children navigate the new world of distance learning. 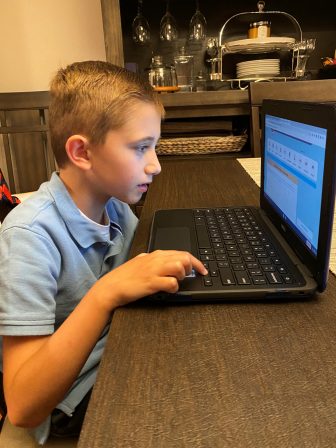 Owen Mekeel, whose father, Tom, is a tech-help volunteer, works on his computer. (Photo provided)

“A lot of families were caught off-guard,” said Aaron Freimark, one of the group’s founders. “Their devices didn’t work, they had trouble with their home network, or maybe they needed a printer and didn’t have one.”

Freimark, now retired, worked in information technology throughout his career.

“The problems are often small and can be solved with little experience and a lot of patience,” he said. “But the idea of a kid missing a day of education because of a tech problem — that moved me.”

Last August, when it became apparent many students would be returning to a virtual classroom, Freimark and other tech-savvy volunteers worked with the Haldane school district and the PTA to set up a support group for parents.

A live chat service offered by the group at the website haldane.help offered assistance to a dozen families during the first two weeks of the fall term, Freimark said.

Diana Hird was among the parents to reach out. “The tech support blew me away,” she said. “I typed a question into a dialogue box and someone responded almost immediately.”

Eliza Starbuck also benefited. “Three volunteers immediately responded to help me; they answered my questions and took the weight of figuring it out alone off my shoulders.”

The site also includes a list of “tips and tricks,” with topics such as “How do I send a file to my student’s school email account?”

Freimark said questions posed by parents have been all over the map, including complaints about internet speed. “Often the problem isn’t actually the Optimum cable into your house; it’s your computer struggling to keep up with too much demand,” he said.

His advice to parents and students in that situation? “Turn off your fancy Zoom background, close apps you aren’t using, stop multi-tasking. That often does the trick.”

Cindy Cohen, another tech volunteer, said that during the first couple of weeks of school, parents spent a lot of time searching emails to find logins and instructions about how and when their children were supposed to sign on.

“Not all parents are tech-oriented,” Cohen said. “It’s a lot to learn because of the many different platforms being used in the schools.”

Internet access, especially with Optimum the only option in Philipstown, is a common problem, Cohen said. “The service is less than ideal when so many people are videoconferencing at the same time.”

Parents should not be shy about asking for assistance, Freimark noted, even if they feel they don’t “get” technology. “It’s always changing,” he said. “People who get it one day are often left behind the next. We all feel left behind and dumb at some point; nobody should feel ashamed to ask for help, because at this point tech skills are life skills.”