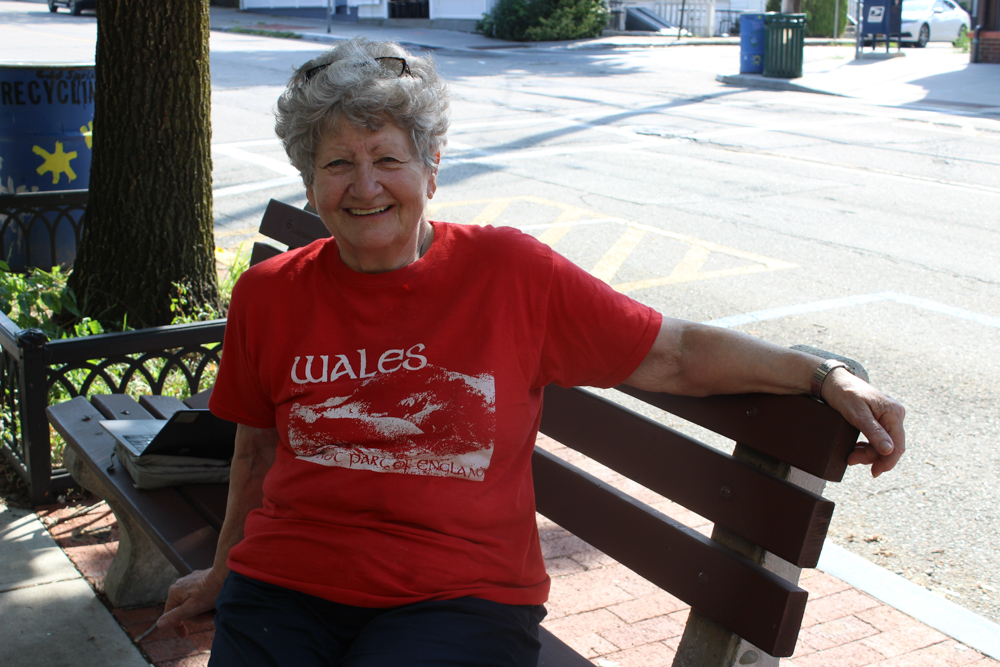 Leonora Burton outside her Main Street shop (Photo by A. Rooney)

Leonora Burton is the proprietor of The Country Goose in Cold Spring and the author of “Lament of an Expat: How I Discovered America and Tried to Mend It.” She spoke to Alison Rooney.

I was in high school, at a private boarding school in Worcester, England. My oldest sister was a secretary for our father’s transportation business. My two other sisters were nurses. I was in my final term of school and had been accepted at a teacher training college.

We were all in class, and someone came in and said, “Leonora, would you go to the headmistress’ office?” There, the headmistress, Miss Roden — she had a twitch in her eye — said:

“I have some sad news for you: your father just declared bankruptcy. You’ll have to leave the school.”

“But he paid for my three sisters to come!”

I went back to my room and started packing; I was in disbelief. Then the housemistress came in and told me, “I have your father on the telephone.”

“I’m so sorry,” he said. “I’ve just found out my accountant for all these years has been stealing from me. Your mother and I are going to live with your grandmother in Wales — I’m coming to pick you up.”

The accountant ended up in jail for many years. He’d never filed taxes for his clients, including my father, and had been pocketing the funds. My father had to sell everything. He had inherited the business from his father. Originally, it was a business where they collected bones from butcher stores and sold them to a glue factory. It was considered an essential service during World War II. My father had turned it into a transportation company.

Teacher training obviously was no longer for me. The only feasible career was nursing, which paid a salary during training. I applied to the Royal Masonic Hospital. It was June, and they accepted me for January. During the six months of waiting, I applied for a job in the accounts department at Monsanto Chemical in Newport, Wales, where we’d moved. The problem was, I was 17 and could never do math. It was obvious in the first month that I had no idea what I was doing.

The woman who hired me, Miss Drew, was helpful, though, and told me: “It’s not working out for you, but my sister has a dry cleaning store and she’s looking for a receptionist.” At the dry cleaners, there was another Miss Drew — the first Miss Drew’s sister. Soon after, she sat me down and revealed: “We’re both your aunties, and you also have a great-aunt living here in Newport.”

I was thoroughly confused. “What’s going on?” I asked.

“Oh, so many years ago, your grandfather was still living in Yorkshire, and he was engaged to your grandmother, [also named] Leonora. When he was 20, he got into some trouble and was sent to prison for two years. Leonora visited him every day. His sister — your great-aunt — decided to leave Yorkshire and set up a business here in Newport so that when he got out of prison, he could come to Wales, start a new life, and no one would know he had been in prison.”

When my grandfather joined his sister in Wales, he met and fell in love with a Welsh girl, but his sister was adamant that he should marry loyal Leonora, who had stood by him while he was in prison.

They did get married and stayed in Newport. Their business flourished, and was handed down to their only child — my father — who did well until the crooked accountant came along. Not long after my father was born, my grandmother and my great-aunt had a huge argument and my grandmother severed the relationship.

After telling me that story, the second Miss Drew invited me to meet her mother, my great-aunt, who had stayed in Newport, married and had two girls. My great-aunt had kept an eye on her brother but never came forward to identify herself to her nephew (my father).

It was eye-opening — a whole branch of the family I never knew existed. My great-aunt was forthcoming, fully aware that she probably forced her brother into a marriage that was not going to be particularly happy for him; I think she regretted that. She must have been a stalwart lady to leave Yorkshire and come and start a business so her brother would have something to do when he came out of prison.

The question at that point became: What do we do with this knowledge? Despite all of us being in the same place, dad never knew they existed. Should we tell him about his great-aunt, who lived two blocks away? We agreed we should.

So, we all met and it went well. We have been friends ever since. The secret only came out because I happened to be working for the dry cleaners. They had never intruded. They always said, “We were just so happy we were able to help you.”

My father was reluctant to talk about anything. He was devastated when the business went into bankruptcy. He found a job through a charity and dedicated the rest of his life to raising money for the disadvantaged, including in New Delhi. My mother was strong — she helped him. My secretary sister stayed living with them.

We all adapted swiftly to all these changes. You have to — it’s what life serves you up.

2 thoughts on “Something You Don’t Know About Me: Leonora Burton”