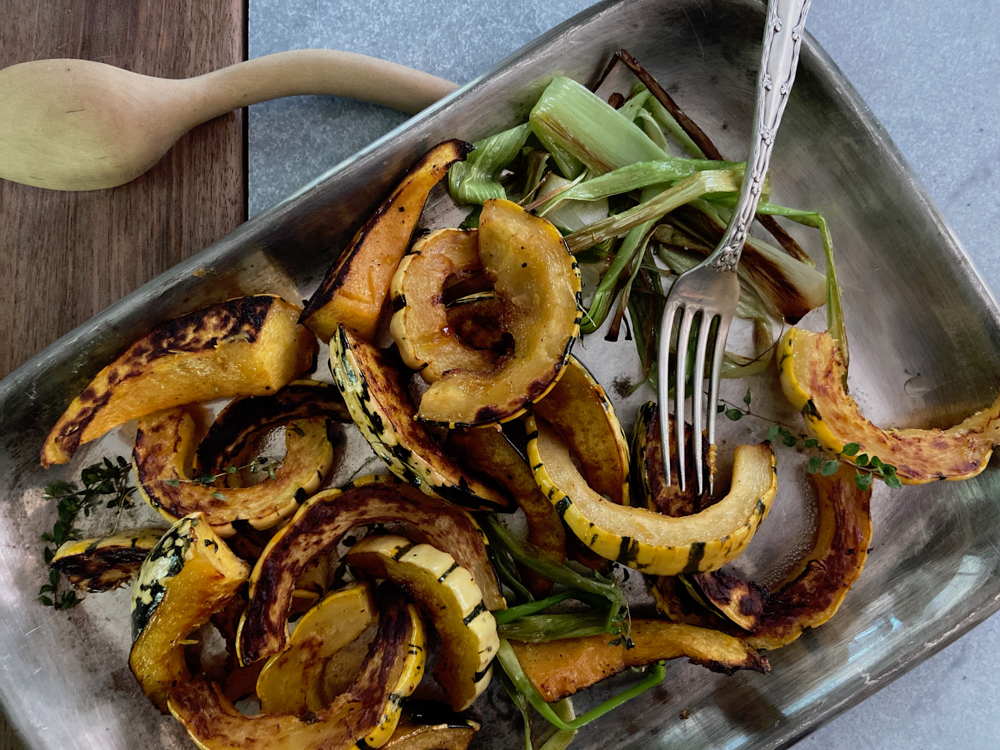 Nigel Slater wrote that sentence. Upon reading it in The Kitchen Diaries several weeks ago, I thought: Ooh, I might have to steal it when the time comes. Who’d ever know?

Luckily, the time did not come. I was thus saved from committing an act of crass plagiarism, not because I had an attack of conscience, but because there was nothing the least bit slip-y about the way summer’s 70-degree mornings met with fall’s 30-something contenders last weekend.

I puzzled over how to describe the shift. Did summer slam into autumn? Did it plummet into it? Collide headlong with it? After perseverating a bit, I realized that I was looking at the whole event backward — that, in fact, autumn had barged in on summer like an angry parent bursting into a teenager’s bedroom: Party over.

Of course, the actual party is far from over. Not only is the temperature likely to bounce around the dial for a long while yet, but also autumn is arguably our region’s most festive season — the year’s splashiest party, at least as far as nature’s concerned.

Still, for me, the seasons are marked as much by cravings and flavors as by dates and temperatures. And last week, I suddenly found myself eyeing the delicata, kabocha and sweet dumpling squashes at the market, whereas just the week before I’d only had eyes for zucchini.

The former are referred to collectively as “winter squashes,” a category which also includes acorn, butternut, hubbard and various pumpkin kin; they generally have tougher skins and hollow seed pockets filled with inedible (unless roasted) seeds. So-called summer squashes, like zucchini and its ineptly named cousin, yellow summer squash, are eaten when young and tender from skin to core.

You may notice that, like our recent weather, these classifications skip a season, jumping from summer to winter without so much as a fare-thee-well. The garden, meanwhile, prefers not to slam through this transition. Winter squashes typically start showing up in late August, and summer ones ripen well into October (and are available year-round at the grocery store).

But most of us experience the difference between these categories on our plates and palettes, where winter squashes appear garbed in caramel-apple-worthy coatings of maple syrup and butter, whereas summer squashes prefer to doll about in claddings of basil leaves, tomatoes and mint.

Many years ago, I discovered an easy, delicious way to roast fall squashes by tossing them with a dollop of apricot preserves along with the usual olive oil, salt and pepper. The apricots introduce a bit of rich acidity to the sweet, mellow squash, and the preserve’s sugars help the vegetables caramelize at the edges to a crisp-chewy golden brown. A few sprigs of thyme make the whole mess even better.

I began adding apricot jam to my basic roast squash back in the 1990s, around the same time that I first laid eyes on the Hudson Highlands. I clearly remember the autumn morning when I drove north on Route 9 from the Bear Mountain Bridge toward Beacon, en route to a photo shoot, through a tunnel of magenta, orange, crimson and gold — sugar maple, scarlet oak, gingko, copper beech. Wow, I thought: Remember this place. And I did, through many long years of city-living, family-starting and career-building, and through the writing (and ghostwriting) of hundreds of articles and cookbooks, many filled with sentences that, every once in a while, other people were tempted to borrow.

The roasting time will vary depending on the ripeness of the vegetables. This glaze is also good with any roast roots — carrots, beets, parsnips, leeks, etc. You can even layer the vegetables under a roast chicken, though the vegetables will cook faster than the bird, and should be added during the last 30 to 40 minutes of cooking.

Heat oven to 375 degrees. Cut the squash in half lengthwise, stem to tail, and scoop out the seeds and strings. Place each half cut-side down on your work surface, and cut into ½-inch slices.

Trim the leeks, cut in half lengthwise, and place in a basin of water to soak out any dirt and grit, swishing now and then. Remove and pat dry.

In the bottom of a large bowl, mix together the olive oil, preserves, salt and pepper. Add the squash pieces and leeks, and toss to combine.

Spread the vegetables and the thyme sprigs in a single layer on a rimmed baking sheet. Transfer to oven and roast until tender, golden and caramelizing in places, about 25 to 30 minutes.