Recent clusters of COVID-19 cases in Orange and Rockland have raised fears of a spread to other counties and prompted the state to deploy rapid-testing resources.

The outbreaks also dramatically raised the Mid-Hudson Region’s positive rate, one of the measures used to determine if businesses, schools and other places can remain open not just in Orange and Rockland, but in Dutchess and Putnam.

Three of the four-highest rates of positive COVID-19 tests from Sunday (Sept. 27) were in Rockland County ZIP codes: 30 percent in Monsey, 25 percent in Spring Valley and 18 percent in Suffern. The 10950 ZIP code in Orange County, which includes the Town of Palm Tree, had a positive rate of 22 percent, the third-highest rate in the state. 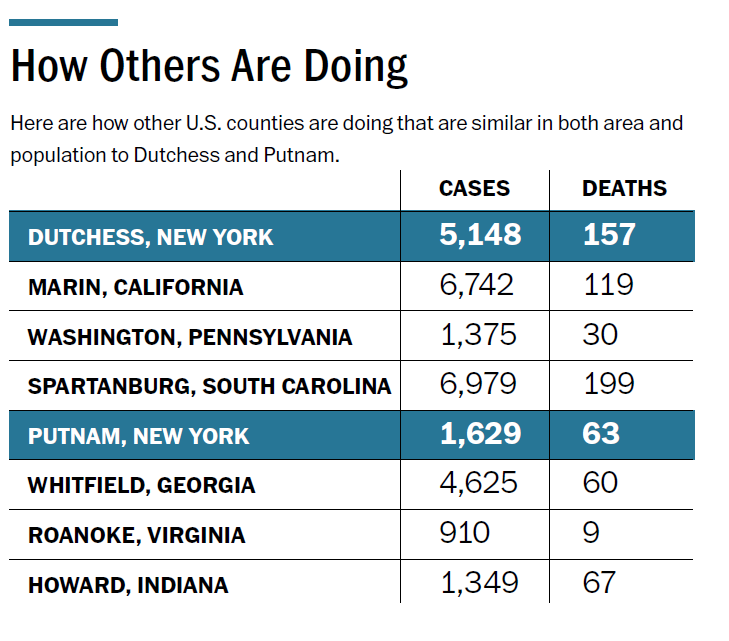 Sunday’s positive rate for the Mid-Hudson Region, which also includes Sullivan, Ulster and Westchester counties, was 3.1 percent, nearly double the rate from a day earlier. Under the state’s guidelines for reopening businesses, schools and other places, each region’s “control room” — a team of local officials — can “slow or shut off reopening if indicators are problematic.”

The trend continued into Wednesday (Sept. 30), with positive rates of 17 percent in the ZIP code that includes Palm Tree, 14 percent in Monsey and 15 percent in Spring Valley. The rate for the region was 2.8 percent.

Residents in 10 ZIP codes comprising just 3 percent of the state’s population added up to 27 percent of Sunday’s positive tests, according to the state. In addition to the four ZIP codes in Orange and Rockland, the list included four areas in Brooklyn, one in Queens and one in Broome County, which is part of the Southern Tier Region.

On Wednesday, the areas in Orange and Rockland counties were among 20 ZIP codes representing 6 percent of the state’s population and 26 percent of all positive cases.

Steve Neuhaus, the county executive for Orange County, said on Monday that the increase in his county over the weekend was “by far” the largest since May. More than half those cases, 56 percent, were in the Hasidic-majority Town of Palm Tree, he said. Palm Tree and other Jewish communities have been celebrating the High Holidays, which began on Sept. 18.

Cuomo said the state was making available 200 rapid testing machines to Orange and Rockland counties, to Brooklyn and to Broome County. The machines are capable of delivering COVID-19 results in 15 minutes. He said he also spoke with leaders in the Orthodox communities on Wednesday (Sept. 30).

“I explained the situation frankly and candidly and we had a good exchange,” said Cuomo. “I think it’s fair to say that the leaders of the community understand and they’re going to take action and we’re going to come up with an action plan.”

For months, Cuomo has criticized local governments about enforcing compliance with masks and social-distancing laws. He reemphasized that during his briefing on Tuesday, saying the clusters can be kept from spreading if local governments “respond in a way they haven’t done up until now.” 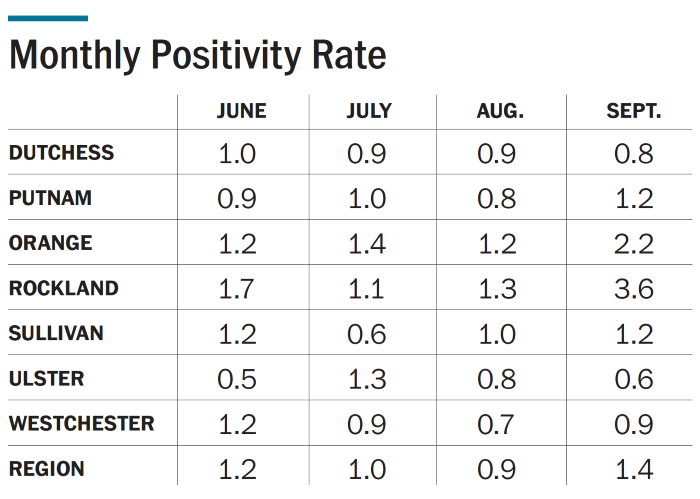 Ed Day, the county executive for Rockland, said in a statement released on Monday that his administration is “continuing to work closely with municipal, community and religious leaders” to remind them of the state’s guidelines.

He also said he was “privately and publicly urging local municipalities” to use building and fire inspectors and police officers in “educational efforts” and that he expects “appropriate enforcement actions to be taken, as necessary.”

“We in government must focus all our energies on ensuring residents follow the common-sense precautions that limit the spread of this deadly disease,” said Day.

“As you can imagine, God is quite busy right now,” Neuhaus said, adding that “it’s been a frustrating effort on all of our parts.”

While cases are far below what they were during the height of the pandemic in the state, each of the Mid-Hudson’s counties has been guarding against outbreaks since businesses, churches and cultural and entertainment sites began a phased reopening in May, followed by schools last month.

Just last week, Dutchess and state Department of Health officials responded to an outbreak among residents and staff at the Hedgewood assisted living facility in Beacon, and Rockland announced that anyone attending one of three Spanish-language Masses at a church in New City may have been exposed to someone positive for COVID-19.