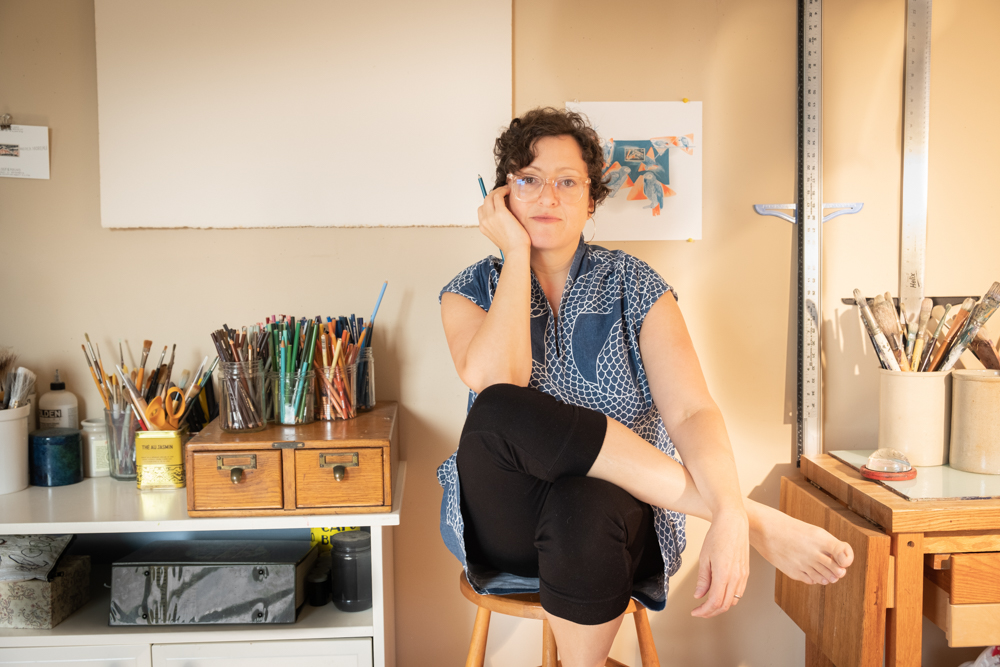 When  she was a child, Andrea Moreau’s father tried to foist his interest in stamp collecting on her, she says. He bought her an album, but his enthusiasm never took hold.

Yet some sort of “passive interest” emerged years later, the Beacon artist recalls, when she rediscovered postage stamps she had saved from a backpacking trip to Mexico during college.

“I felt wistful looking back at them and, purely for myself, I began doing these little drawings of the imagery in my journal sketchbook as a way to put myself back there, in that place,” says Moreau, who contributed to a group show that is part of the annual Beacon Open Studios this weekend.

While pursuing an MFA in painting and drawing at The Ohio State University, Moreau showed her old sketches to a professor, who encouraged her. She has since used stamps as a jumping off point for “a dialogue between the printed and the drawn, the official and the personal, the real and the imaginary.”

Moreau says each piece of art begins with a stamp that transfixed her in some way. Then she draws around it.

“In almost all of them, the stamp is in there, untouched,” she says. “Each is a drawing in response to an artifact, a piece of the world, and that piece of the world needs to be a part of the work itself. I’m able to put myself in places I’ve never been to by studying a tiny fragment of a huge place, in this half-inch.

“I don’t use the beautiful stamps,” she adds. “I use those which suggest something beyond the border. When I go to stamp conventions, I don’t want the ones that are worth anything, I want the ones that tell a story. I like stamps with cancellation marks, not the pristine ones. Even if I do happen to know the background of a stamp, I try to just take it on face value, just work from the imagery.

“The stamps are often etched and precise. I work a lot with colored pencils and I like the labor of having to keep sharpening them. It’s more about the effort than the finished outcome. I never want a drawing to be about how good I am at drawing something. The clumsier they are, the stronger they are. I have a whole drawer of failures because there has to be that risk of not turning out in order for there to be any chance of success.”

Moreau, who teaches at SUNY New Paltz and the Garrison Art Center and is a guide at Dia:Beacon, finds her stamps at conventions; through an online stamp club where stamps are offered by themes or countries of origin; or through friends and acquaintances. “It’s amazing the people who come out of the woodwork with these beautiful old stamp collections, which they donate to me,” she says. “It’s wonderful.”

Sometimes, Moreau does a series of drawings; she recently completed one on space travel. “You and I have never been to outer space but we have an image of what it looks like,” she says. “We have photographs, but we still see it in our own way. I’m intrigued that there are countries which put out stamps celebrating space travel even though they have no space program of their own.”

Moreau says she prefers to know as little about a subject as possible. “When I pull a stamp, there has to be something that I don’t quite understand, which looks like it could be the tip of an iceberg,” she says. “Sometimes the jumping-off point might be a tiny bit of a pattern peeking out from a corner of the stamp.

“I’ve recently started working on a series of American senators, diplomats from the 1940s and 1950s. I don’t know who they are, and it’s not important that I know anything about them before I begin working, because I’m just trying to figure out this meeting of the official and the individual. I could do research, but in a way, not doing the research is part of it; I try to lose myself in the drawing.

“The stamps all have something about them that seems like it’s presenting something that I feel I need to poke, to take it further.”