State laws that went into effect in September

This law passed as part of a larger budget bill in which legislators could not vote on its individual provisions and which passed along party lines. It decreased the gross weight rating of commercial vehicles that are prohibited from operating on a highway or parkway from 26,000 pounds to 10,000 pounds.

Another law in the bill amended the arms of the state (which appear on the state flag) to add “E pluribus unum” (Latin for “out of many, one” — the motto of the U.S.) below the shield argent and “Excelsior” (Latin for “ever upward”). The current arms had been unchanged since 1882. 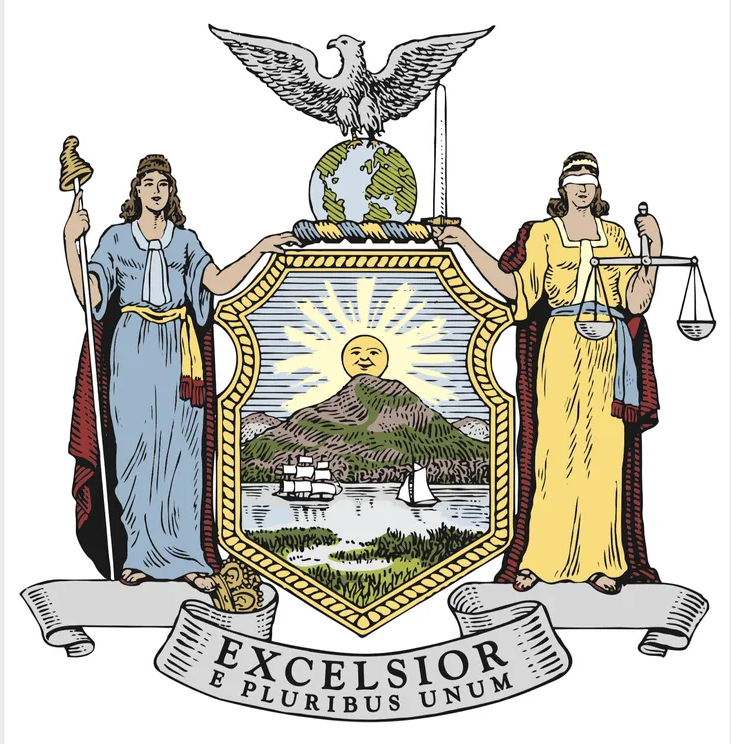 The new state arms; it had not been altered since 1882. On the left is Lady Liberty and on the right is Lady Justice. The masted ship and the sloop on the Hudson River at center are symbols of inland and foreign commerce.

A third law prohibits businesses from charging a “pink tax,” or higher prices for “substantially similar” consumer goods or services marketed to one gender or another. For example, the bill’s sponsors said, pricing a child’s swimming pool at $89.99 for blue and $69.99 for pink would be illegal, as would dry cleaning a woman’s suit jacket for $12 and a man’s suit jacket for $8. The law requires a business to provide a written price list upon request for any service.

This law requires a police officer who discharges his or her weapon where a person could have been struck to immediately report the incident.

This law passed as part of a larger budget bill in which legislators could not vote on its individual provisions and which passed along party lines. This law extends access to annual sick leave to all private-sector employees. Employees can begin accruing sick leave on Sept. 1 but cannot begin using it until Jan. 1, 2021.

A second law allows recipients of public assistance to receive a free identification card if they do not have a valid driver’s license.