That was in 2009, just before the 2010 federal census provided local population counts that would guide the effort. The Democrat-controlled Legislature created a five-person committee but it was dismantled the following year after the Republicans won control. 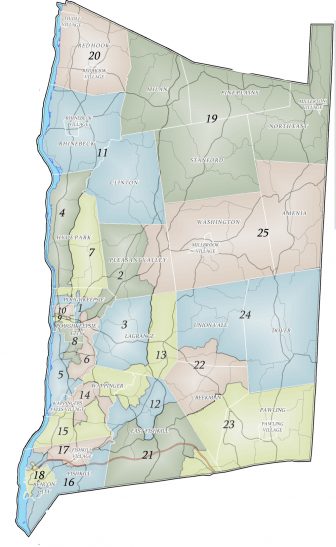 Ten years later, the issue appears on the general election ballot. Last year, the Legislature again created a redistricting commission — this time with unanimous support from both Democrats and Republicans — and Dutchess residents are being asked to give their OK. If approved, the seven-person panel would redraw the county’s legislative districts next year based on data from the 2020 census.

The Legislature established the commission as part of a package of reforms that included term limits and a new ethics law. But state law requires that any measure that “abolishes, transfers or curtails any power of an elective officer” must be approved by voters. The commission is meant to be an antidote to gerrymandering, or the drawing of legislative districts for political advantage.

Republicans, who hold 15 seats, and Democrats, who have 10, would each choose two members of the commission, and those four appointees would choose the other three. The districts redrawn by the commission would not be allowed to favor any party and must be “contiguous” and “uninterrupted.” Each district must have roughly the same number of residents, which is currently around 12,000 people based on the county’s population of about 300,000.

Any Dutchess County resident who qualifies, which includes being registered to vote and past employment restrictions, can serve on the Reapportionment and Redistricting Committee. Visit dutchessny.gov/DrawTheLines or send a letter of interest with your address and a statement affirming your eligibility to County Executive Marc Molinaro at 22 Market St., Poughkeepsie, NY 12601. The goal, according to the county, is to create a commission that reflects the county’s “geographic and demographic diversity.”

While the county Board of Elections could make “minor technical adjustments,” the new boundaries would “have the force and effect of law” and be used beginning in 2023.

Frits Zernike, a Democrat whose district includes one ward in Beacon, said the proposal before voters was “watered down” from the version proposed by Democrats but “way better than the alternative.”

Nick Page, a Democrat whose district covers the other three wards of Beacon, called the law a “safeguard for part of the democratic institution.” While the votes to approve and then repeal the 2009 commission largely fell along party lines, he said “it feels like there is a real consensus on this, which is nice.”

Among active voters in Dutchess County, nearly 68,000 are registered Democrats and just over 52,000 are Republicans, according to the state Board of Elections.

“It’s a purple county, so there’s a mutual recognition that anybody would be hard-pressed to say who’s going to have the majority going forward in this body,” said Page, who is the assistant minority leader. “It also reflects general recognition that the partisan divide hasn’t narrowed.”

If approved by voters, the law would prohibit former elected officials and political party officials from being commissioners unless they have been out of office for at least three years. The same restriction applies to state and municipal employees.

In redrawing legislative districts, the commission will not be allowed to use voting results and patterns, polling and enrollment data, “or any other data relating to the expected partisan allocations of vote totals” unless the data is required under federal or state laws, such as the Voting Rights Act.

Commissioners are required to open their meetings to the public, post minutes within five days after each meeting, hold at least two public hearings and allow county residents to comment on their draft plan.

Gregg Pulver, a Republican who chairs the Legislature and represents North East, Stanford, Pine Plains and Milan in northeastern Dutchess, said he could not point to any egregious examples of gerrymandering, although he said some districts have boundaries that “don’t make total sense.”

No matter which party controls the Legislature, “this is a good move,” he said. “In this day and age, government gets a bad-enough rap. We have to do something to instill some confidence in the constituency that we’re trying to do the right thing.”

If the commission is approved by voters, the four legislative appointments would have to be made by Feb. 1 and the three remaining members appointed by Feb. 15. The commission would be required to adopt a plan by a least a 5-2 vote, and the Legislature would need to approve the commission’s proposal before it was submitted to the county Board of Elections.

Dutchess is not alone in hoping to redraw districts based on 2020 census data. In 2014, state voters approved a constitutional amendment to create a 10-member commission that will redraw state Legislature and congressional districts.

The U.S. Census Bureau is expected to release population figures for redistricting by April 1. According to the state law, districts must be “convenient and minimize the division of communities of interest to the extent practicable.” A “community of interest” denotes areas “with recognized similarities of interest, including but not limited to economic, social, cultural, institutional, geographic or historic identity.”