Sheriff criticizes cuts to his department

Putnam County Executive MaryEllen Odell on Tuesday (Oct. 6) presented county legislators with a draft 2021 budget of $164.2 million — although it assumes no reduction in state aid despite the economic impacts of the COVID-19 shutdown.

It also projects that the county will collect $59.7 million in sales tax, or only about $1 million less than in 2020, although sales tax revenues through August were down $2.7 million, or 6.4 percent, from the same period in 2019.

According to Odell, her proposed budget represents an increase of less than 1 percent over the final 2020 budget, meets the tax-hike cap imposed by New York State and anticipates a levy of about $45.6 million in property taxes. She estimated that a home with an assessed value of $357,000 would pay $1,182 in taxes, or about $25 more than in 2020.

The nine-member county Legislature, which convened and heard Odell’s presentation by audio connection, can revise her draft before approving a final budget in late October.

Odell told legislators that the pandemic had “upended” her financial team’s budget preparation. But, she said, “we believe we have delivered a sound budget that meets our fiscal and social responsibilities to constituents and employees.”

But it might not hold. Gov. Andrew Cuomo has withheld some state aid due to economic uncertainties and Odell acknowledged that “these deferrals may be permanent in the absence of a federal stimulus package.” If a cut of 20 to 50 percent in state aid occurs, it “could result in the loss of significant revenue, perhaps $7 million” for Putnam, Odell said. “That could result in layoffs and service cuts” and “the people of Putnam will suffer.” She termed it “imperative that New York meet its commitment to the counties.” 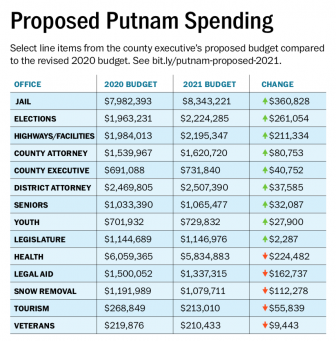 Dissatisfactions with Odell’s draft surfaced before the Legislature adjourned. Sheriff Robert Langley Jr., who lives in Philipstown, and Nancy Montgomery, who represents Philipstown in the Legislature, criticized Odell’s proposed cuts to funding for the Sheriff’s Department. Langley and Montgomery are Democrats; Odell and the other eight legislators are Republicans.

Langley also faulted the budget-drafting process, saying he was excluded from discussions and only allowed to review the budget with Odell 30 minutes before she sent it to legislators. The county released the draft online on Oct. 2. 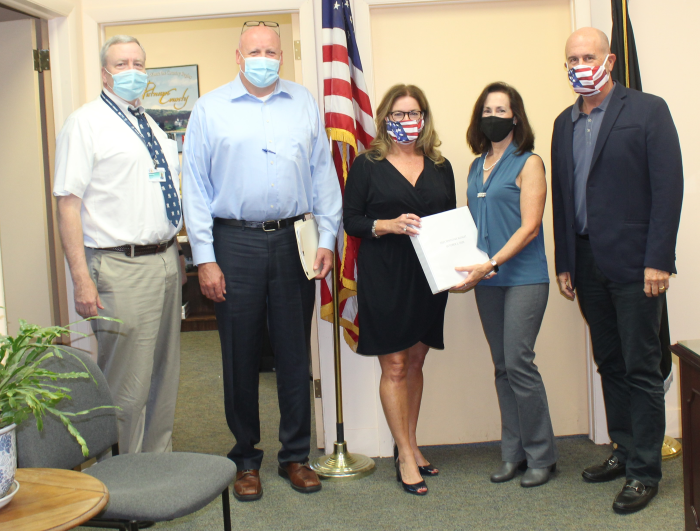 In a public hearing that occurred immediately after Odell’s presentation, Langley expressed concerns about the impact of the cuts on public safety at a time of unrest across the nation. The last-minute nature of his meeting with Odell also provided “no opportunity to negotiate other areas we could cut from,” he said.

Montgomery added: “I see from the get-go that it looks like we are defunding the police.”

The legislator also questioned raises proposed in the draft for some county officials and staff, although no details were provided in the budget documents released to the public. Citing a statement attributed to Odell that “we’re here for the people of Putnam County,” she said now those people “are hurting” and often “out of work. Handing out the raises I see in this budget is not serving the people of Putnam.”

Although the money was shared by several towns, “that’s going to be a definite hit on us,” he said. “I just can’t believe that in this county we’re going to allow” cemeteries with tombs of “our sacred dead, the war veterans” and others to be overgrown.

Not maintaining the cemeteries sends the message that “we don’t care,” he said. “It’s disgraceful.”

Philipstown Supervisor Richard Shea said that over the past five years Putnam County has received $10 million in “excess” sales tax — totals that surpassed expectations — which it doesn’t share with the municipalities where it was collected. Now Putnam cannot even find $18,000 for burial grounds where some graves date to the 1600s, he said. “It’s complete mismanagement. It’s horrifying.”