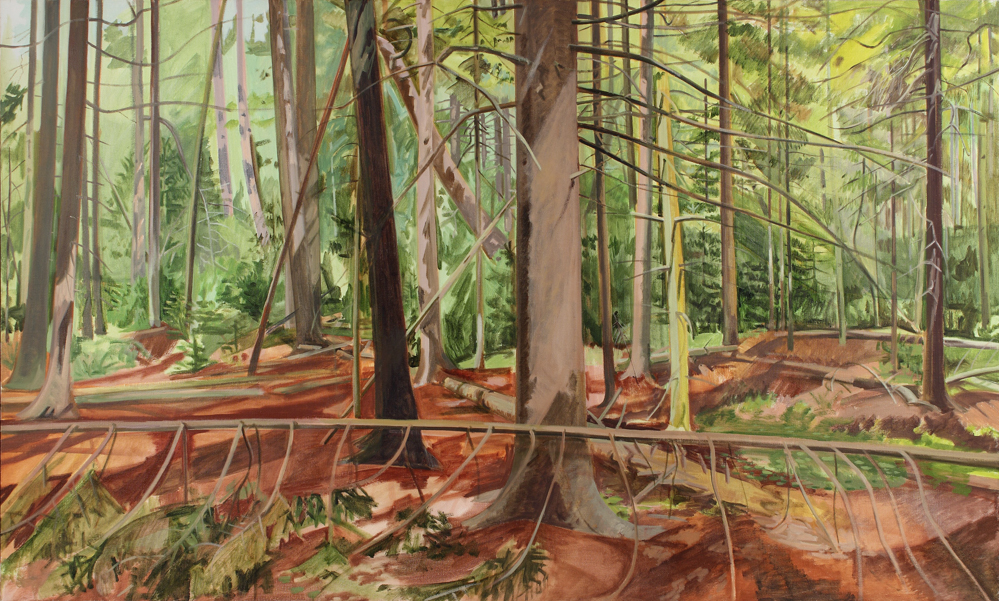 Parts & Labor Beacon was one of the first galleries in the city to reopen to visitors during the pandemic, but it had the advantage of an expansive space that allows easier social distancing.

Its second show since March is now in its final stretch, running through Oct. 25. Visitors must make appointments and wear masks. 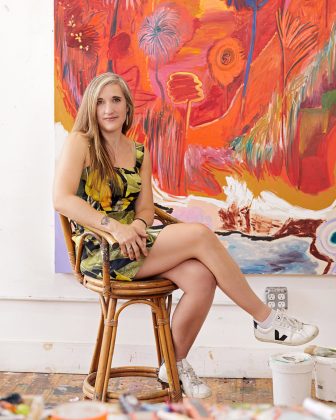 “It’s just been nice to have this space open,” says Nicelle Beauchene, who owns the North Avenue gallery with Franklin Parrasch. “Every appointment has been booked. There have been more people seeing shows outside New York City, which has been great. We’ve had museum groups come through, dealers. We’ve had artists and artists’ estates coming to us to ask for exhibitions.”

The current show, in keeping with Parts & Labor’s usual model, pairs an emerging or mid-career artist (in this case, Shara Hughes) in conversation with a more experienced and recognized artist (93-year-old Lois Dodd). Both are landscape painters.

“They were excited to get to know each other, and they worked together to choose the work,” says Beauchene. “Shara’s work is free-form, with surrealist colors. Lois’ work involves making studies; she’s painting more from life, en plein air.”

Dodd studied painting at Cooper Union in the late 1940s and in 1952 was one of the five founders of the avant-garde cooperative Tanager Gallery. She spent summers in Maine, which served as a foundation for much of her work.

“I work best going back to the same places,” Dodd says. “I change, they change or the weather changes. I used to think the subject would dry up, and I would have to make a move. But that never happened; it is the reverse.” 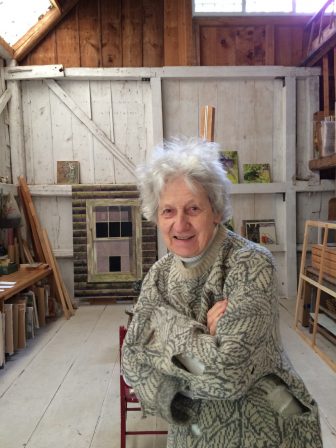 Hughes, who was born in 1981 in Atlanta and still lives in the south, paints in bold, lush strokes and colors. After developing an image, she says, her process involves allowing it to change “until the space starts to emerge and I can see what kind of landscape is showing up. The minute I start controlling the color or the narrative of the painting, I change my mind and take a left turn. It remains exciting and fresh for me because I let the painting have a mind of its own.”

Hughes’ intersections with Dodd’s work, Beauchene says, are in her creation of “portals that allude to spaces beyond the picture plane — anticipating the mystery of what is on the other side of a floral pathway, for example.” The contrasts between the two artists are mainly in Dodd’s “fidelity” to the space and light before her, Beauchene says, and Hughes’ journey to where those same elements take her imagination.

The works hang together. “In some shows we keep the artists more separated, but with this, their colors riffed off each other. For instance, there is a space with a predominantly yellow forsythia painting of Lois’, and placing Shara’s work right next to it made pinks and other colors in Lois’ work come to the foreground.”

Parts & Labor Beacon, at 1154 North Ave., is open by appointment on Saturdays and Sundays from noon to 6 p.m. Text 413-687-9449. The entrance is at the rear of the building, down the grass slope. See partsandlaborbeacon.com.