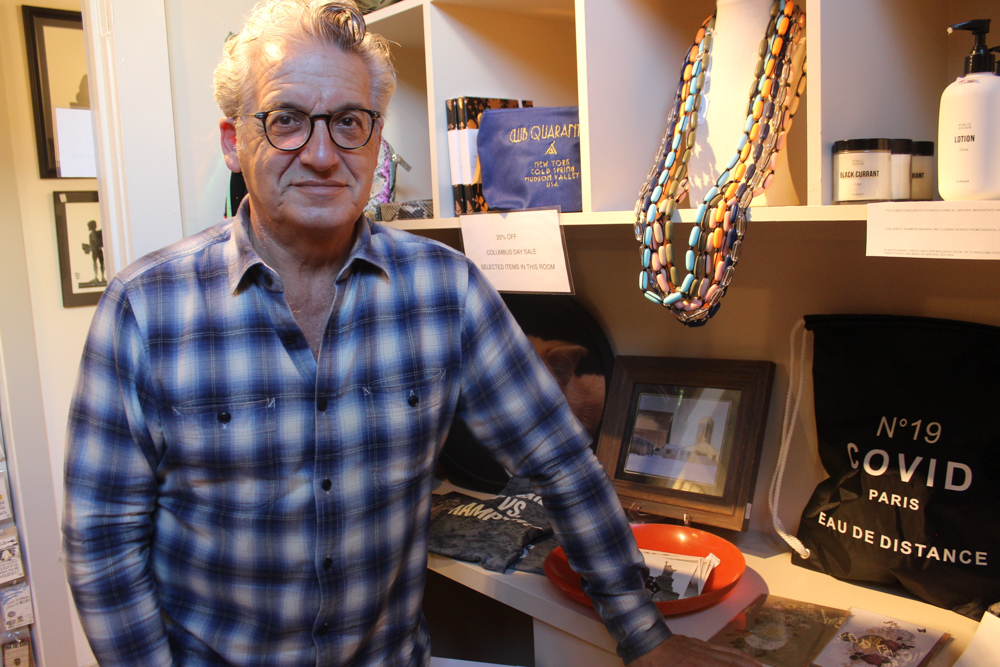 Sam Gold at his shop (Photo by A. Rooney)

Sam Gold is the owner of Rivertown Trade at 103 Main St. in Cold Spring. He spoke with Alison Rooney.

Is this your first retail store?

Not at all. In the early 1990s, my brother was working for Ian Schrager — do you remember him? He and Steve Rubell ran Studio 54 and Schrager had three hotels in New York City and The Palladium nightclub, which my brother was running as executive director. My brother knew they needed someone to run retail in the Paramount Hotel. Schrager and I clicked and I created a shop for him. He was a visionary and we were simpatico. I grew into the experience, I guess. He saw something in me that I didn’t know I had. I went along for the ride. I spent 14 years traveling around the world and buying — all because I got lucky. Schrager had the best people in the world working for him and I couldn’t believe I was in that circle.

What did you stock at the hotel shop?

Picture a mini-Barney’s, in terms of bath and beauty — an upscale boutique in an upscale hotel. I would walk around SoHo, shops in the West Village, even Barney’s itself, and buy at retail prices, add some dollars, put them in the Paramount and sell them. They flew off the shelves.

What expertise did you bring?

None whatsoever! I had worked for Time for 12 years before that, in computer graphics. In the final stages of production, we would transmit images, via satellite, to the printers. We were one of the first to do desktop printing. I took a severance package when Time merged with Warner, and I was hanging out for a while before I met Schrager. It was the perfect opportunity for me because I didn’t have to invest in the business.

What happened after the Paramount store was up and running?

All of a sudden, Schrager was opening up all these boutique hotels: The Delano in South Beach, The Mondrian in West Hollywood. Every year-and-a-half after that he’d add another one in the U.S., and then he opened in London. After a while these designers would come to me — Kate Spade, Missoni — labels you didn’t usually find in hotels. Then the Mandarin Oriental came knocking, and I opened shops for them, including in Tokyo.

Did you have a home base?

I rented a flat in every city I worked in. That’s all I was doing: traveling and buying. I was single; it was a wild life. I sold the business in 2005. Schrager resigned; he left, I left. I sort of retired in 2006. I met a woman from Holland, got married and we have two children who are now 10 and 13. I moved to Palm Beach County in Florida and was a stay-at-home parent for 10 years. We got divorced and I came back to New York to be close to my children. I started working part-time two years ago with Hallmark, doing installation and merchandising.

After living around the world, what do you think of Cold Spring?

I grew up on a farm in upstate New York — Sullivan County. The older I get the more I long for that woodsy, rural lifestyle, because I’ve done it all in terms of hobnobbing and the city pace. I was a quiet, unassuming guy who went about his business and made money. I’ve had the satisfaction of being successful and having fun. Now I have 20 acres surrounding me, and I get to do things like growing dahlias.

But you decided to open another shop, and during a pandemic?

I know — but I got the itch! The village has potential. The opportunity came up six months ago, when I met Bob LeBlanc from The Shoppes and he suggested I rent a small space there for a few months to try it out; they’d manage it for me. When the pandemic hit, I thought, “If not now, when?” I opened in July and it’s been going well — there are so many people on Main Street on weekends; the sidewalks are packed.

How would you describe your shop?

It’s an escape from reality while practicing social distance and at the same time taking a cleverly amusing approach in pitching a pandemic. Amy Rabinowitz — a creative director who used to work for me — and I came up with and designed what we call the COVID Collection. It’s a takeoff on Chanel No. 19. We can’t keep up with the demand, mostly from out-of-towners. They want to bring back something from Cold Spring or the Hudson Valley. People will think about where they were during the pandemic. Those items and our “Catskills vs. Hamptons” T-shirt are big sellers.