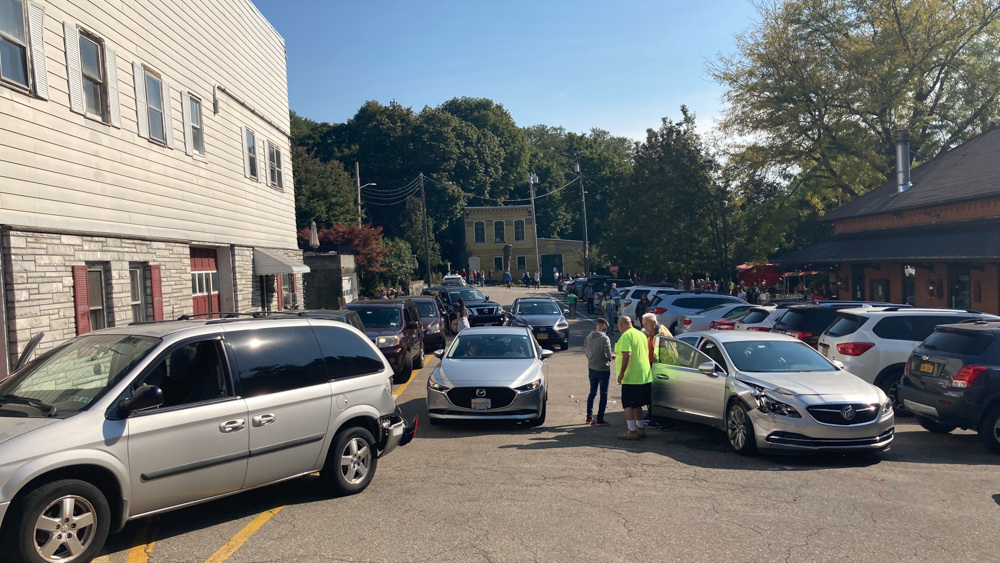 Parking tickets provide revenue to Cold Spring, but they may be the one funding source elected officials would prefer to see reduced.

At the Tuesday (Oct. 13) meeting of the Village Board, Deputy Mayor Marie Early asked Larry Burke, the officer-in-charge of the Police Department, to explain a large increase in parking tickets issued last month (227) compared to June (50).

“People are coming up in droves and basically parking wherever they want,” Burke explained. Burke said a veteran Cold Spring officer told him the weekend of Oct. 10 and 11 was the busiest he has seen in the village in 17 years.

Mayor Dave Merandy agreed. “It was just insane,” he said, citing the din of traffic, sirens and motorcycles. “If you closed your eyes, you could have been in New York City.”

Patrick Biesemans, who lives on Railroad Avenue near The Depot, told The Current that the weekend “was the busiest I’ve seen in the five years I’ve lived in the village. The traffic generated by the Depot and ice cream shop is increasingly busy and becoming a huge inconvenience and possibly a hazard.

“Aside from having to manage tourists using our property as though we were an attraction at Disneyland, the streets are getting to a point where near car accidents are a constant,” he said. “Commercial vehicles are also constantly getting stuck between Stone and Depot, on Railroad, usually needing police assistance.”

At the Oct. 13 meeting, Merandy suggested the board re-establish the parking committee it approved and revisit a permit system for residents. One hurdle, Merandy said, is a state requirement that 20 percent of all spaces be available to visitors.

The board discussed a number of potential mitigations, including expanding and metering parking at Mayor’s Park, shortened parking times, lobbying Metro-North to encourage weekend parking at its riverfront lot and marking the street in front of driveways as no-parking and tow-away zones.

A substantial increase in fines could also be considered. Burke noted that if five people visit Cold Spring together by car and split the cost of a $45 parking ticket, “that’s not a bad fee for a full day of hiking.”

The issues go beyond village boundaries. Merandy said he welcomed a petition being organized to protest congested conditions along Route 9D to the north of Main Street. But he noted that the village ends at Fair Street, just before the entrance to Little Stony Point.

“I’m glad people are getting riled up,” Merandy said. “But the petition needs to go to the right people — send it to DOT and Parks,” referring to the state departments of transportation and parks. “DOT does not seem to want to help,” the mayor said. “They’re the ones that put up signs, control the speed limits.”

In addition, “state parks has a responsibility,” he said. “They advertise, bring people in, but don’t seem to want to control the numbers. It’s destroying our properties and our parks.”

Trustee Lynn Miller suggested the village join forces with the Town of Philipstown, which has threatened to sue the state over its management of local parks.

Blue Live Matter, a Carmel-based group that has hosted rallies at the Putnam County Courthouse and whose motto is “only criminals have a reason to hate the police,” circulated a flier calling for supporters to gather at the waterfront on Oct. 25 to “show support for the Cold Spring Police Department.”

The flier targeted Heidi Bender, identifying her as the owner of Split Rock Books and claiming that she “wants to abolish the Cold Spring Village Police Department! Come out and show Heidi that CSVPD is here to stay!”

Bender is running unopposed for a seat on the Village Board. She wrote in an email to The Current: “My job as trustee will involve examining all aspects of the budget, which includes the Police Department. I am not going in with the idea of mindlessly slashing anyone’s budget. I plan to do my research, learn from seasoned trustees and think about how we can all best be served.”

Bender added she doesn’t know why Blue Live Matter is targeting her. “Perhaps because I have unequivocal support for Black Lives Matter and I’ve made it clear,” she wrote. “I believe strongly in citizen engagement.”

There have been discussions for years about whether Cold Spring needs its own police force, which accounts for about 17 percent of the village budget, when the area is also patrolled by the Putnam County Sheriff’s Department, which has a station in Nelsonville.

In the 2015 race for the Village Board, for example, the three candidates were each asked about abolishing the department. Fran Murphy, who is currently on the board, said she believed the village needed a police force, while Marie Early, the deputy mayor, said “we need police services” but that “who provides them, I think, is a good question” to investigate.

A representative for Blue Live Matter, who declined to be identified, said on Thursday (Oct. 15) that the rally had been canceled. “We decided it would be best to refocus our efforts to reelect President Donald J. Trump,” he said.

17 thoughts on “Chaos in Cold Spring”