Two remain, but panel could wait for election

The nine-seat Beacon school board last month filled one of two vacancies in what proved to be a contentious process that led to a shouting match and the board president hitting the pause button at the meeting.

But after three of five candidates for the second opening withdrew, the process to fill it this week looked far different.

The board on Tuesday (Oct. 13) interviewed John Galloway Jr., who had applied for the first vacancy, and Joseph Puliafito, a new candidate. The board last month appointed Jasmine Johnson to fill the first opening. It will decide at its Oct. 26 meeting whether to fill the second seat or leave it empty until the district election in May.

There were stark differences between the meeting on Tuesday and the two that preceded it.

On Sept. 14, the board conducted lengthy interviews with Johnson, Galloway and Barbara Fisher and Travis Fisher, a married couple who each applied to fill a vacancy created by the resignation in July of Michael Rutkoske.

Eight days later, James Case-Leal, who is Hispanic, resigned from the board, saying he should be replaced by Johnson or Galloway, who are both African-American. On Sept. 29, about 50 people attended the first in-person school board meeting since March, and close to a dozen asked the board to appoint Johnson and Galloway, who are each relatively recent Beacon High School graduates, to fill the two openings.

The board voted to appoint Johnson, but a motion to appoint Galloway failed and the members opted to restart the application process. 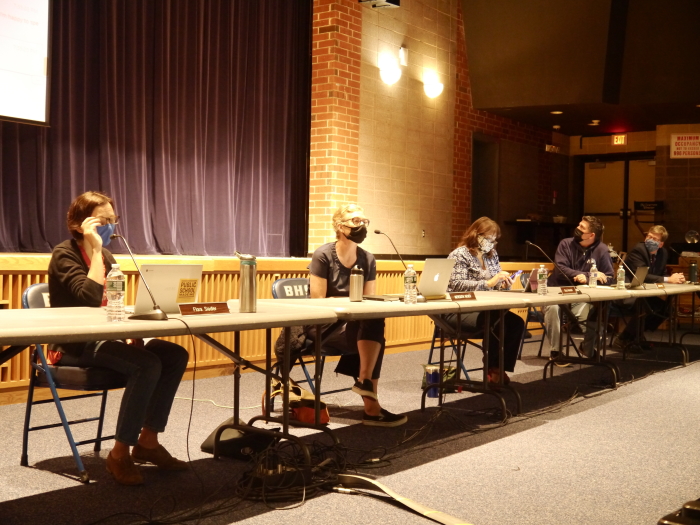 The Beacon school board appointed one member on Sept. 29 but said it would continue to accept applications for a second vacancy. (File photo by J. Simms)

When the school board met again this week at Seeger Theater at Beacon High School, there were no spectators other than Galloway and a few friends, who attended for about 30 minutes before leaving.

The three candidates not selected for Rutkoske’s seat were allowed to roll their applications over for the second vacancy, but Barbara Travis and Travis Fisher withdrew. A third candidate applied but withdrew before the meeting, board President Meredith Heuer said.

In an interview on Thursday (Oct. 15), Barbara Fisher, who owns Barb’s Butchery, said she was pleased to see Johnson, a family friend, appointed. “I was very happy that someone was willing to do it,” Fisher said. “I don’t care who’s doing it, as long as somebody’s doing it.”

Fisher said she and her husband applied to fill Rutkoske’s seat to ensure that the short-handed board would have a quorum for votes if members were absent or sick, especially during the pandemic. She said they agreed with the decision to reopen the application process for the second seat.

“When James resigned was when things got really complicated,” she said. “Our school board has had enough procedural issues, so let this one run” its course.

With the Fishers out of the running, that leaves Galloway and Puliafito. Their interviews on Tuesday were much shorter than those of the candidates a month ago.

Puliafito, who joined the meeting by Zoom but did not appear on camera, said that he has lived in Beacon since the 1950s and has “a lot of experience with multi-cultural classrooms and teaching technology and special-education students.”

Since 1970, he said, he has worked “in colleges and with public school teachers in Manhattan, Brooklyn and Queens, and I’ve seen the problems there. It’s not easy to solve problems, but everybody has to be on the same page and not think about themselves but about each other.”

Puliafito said he had not considered running for the school board before but was interested in seeing where his tax money goes, “so I started to think, ‘Maybe I should be part of it.’ ”

Galloway, who on Sept. 14 accused board members of being “disconnected” from segments of the community and said that the district’s 2017 capital improvement plan should have funded a community center rather than a multi-sport turf field at Beacon High School, rejoined the Tuesday meeting via Zoom but said little.

“Do your best to respect the board and respect the process of the board,” he said, referring to a half-dozen residents who had earlier called in to pledge their support. “It is an appointment process, and we have to stick to the process and hope for the best.”

If the board appoints a new member on Oct. 26, the person will serve until May 18, when the seat will be on the ballot. Voters will also decide on three other seats: the one held by Johnson and those held by Elissa Betterbid and Flora Stadler, whose terms end next year.

The top three vote-getters in May will each serve three-year terms. The fourth-place finisher will complete the remainder of Rutkoske’s term, which ends in 2022.

In the original version of this story, we referred to former board member James Case-Leal as being white. In fact, he is Hispanic. We also stated that Case-Leal said “he should be replaced by a person of color.” To clarify, in his letter of resignation, Case-Leal wrote that he was leaving “in order to open an additional space for John Galloway Jr. and Jasmine Johnson, two well-qualified candidates of color, to both be appointed” in his seat and the one vacated by Michael Rutkoske.